Asif Ali
Abilash Tandon was a man from Westview, New Jersey who got trapped in the reality of "WandaVision" as Norm, neighbor to Wanda Maximoff and Vision and employee of Computational Services Inc.

Abilash Tandon lived in Westview. Wanda Maximoff came to town and, grief stricken, inadvertently created the Hex around the town using Chaos Magic. Abilash became "Norm" and everything else in the town was transformed by the magic into a sitcom reality.

Whilst at work at Computational Services Inc., Norm was amazed by how competent his co-worker Vision with computers. He was unable to answer Vision's question of what it is that they actually did there.

Darcy Lewis recognised that the radiation from the Westview Anomaly mimicked television broadcast waves and tapped into the broadcast. Using the new visuals, they were able to identify Abilash Tandon based on the footage from Computational Services Inc.

Norm was at the meeting with the neighborhood watch where they were gossiping. He seemed unsure at first when Vision joined the meeting but soon loosened up when they began to have a laugh together.

Wanda sent Vision to work on a Saturday to distract him. Norm was working alongside Vision trying to learn how to use email. When Vision accessed the emails there was an intercepted email from Darcy Lewis, the entire office including Norm read the email out loud in unison.

Vision wanted to know what was happening so touched Norm's head freeing Abilash from the mind control. Abilash was frantic, desperate to know if his father and sister were okay. Due to his hysteria, Vision couldn't get any answers so put Abilash back into character, intending on confronting Wanda and finding out the truth.

Norm and Herb were walking along the street talking when Agatha Harkness freed them from their enthrallment. They immediately marched over towards Wanda Maximoff to demand freedom, begging her, along with the rest of the freed residents. Overwhelmed, Wanda yelled out and accidentally strangled the townspeople. She quickly magicked away the strangling and opened the anomaly telling them all to run.

After the Hex was completely gone, Abilash and his neighbors glared at Wanda as she prepared to leave, unable to forgive her for what she did to them. 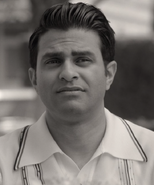