Kathryn Hahn
Agatha Harkness was a powerful witch who could absorb the magical powers of other witches. She posed as Agnes, a resident of Westview and neighbor to Wanda Maximoff and Vision to try and understand Wanda's power and take it for herself.

Agatha was defeated by the Scarlet Witch and trapped inside of the persona of Agnes that she had created, left to live in Westview where Wanda knows exactly where she is.

In 1693 in Salem, Massachusetts, Agatha Harkness' coven led her to a large stake and restrained her to it. They put her on trial for stealing knowledge far beyond her age. Agatha pretended to plead and beg for her life but her mother ordered for her daughter's death. The witches began to chant and all attacked Agatha with their spells. Agatha's unique ability to absorb magic played to her advantage as she drained the witches of their power and lifeforce. Even when Evanora joined her sisters, she too fell to her daughter's power and was drained of life. Agatha took the brooch that her mother wore and left.

Centuries later, Agatha sensed extremely powerful magic in Westview, New Jersey and wanted it for herself so flew into town and disguised herself as Wanda Maximoff's nosy neighbor "Agnes", to fit into the sitcom reality that Wanda had created.

Agnes introduced herself to Wanda and helped her new neighbor to prepare for a special occasion, convincing Wanda that it must be her and Vision's anniversary. Agnes offered to help and make things special for the evening.

When Wanda realised that the special occasion was actual Vision's boss, Mr. Hart, and his wife coming over for dinner, Wanda asked Agnes for help as she had no food in for a dinner. Agnes was all too happy to help and brought over a four course meal to cook. Agnes knocked a pot on the floor and Wanda ushered her out of the kitchen.

Later, Agnes came to the front door with a pineapple for Wanda's dessert but was again quickly ushered away.

Agnes stopped by Wanda's house to drop off her pet rabbit, Señor Scratchy, for their magic act in the talent show. Agnes flirted with Dennis the mailman whilst Wanda put the rabbit inside and then accompanied her to the planning committee meeting.

Later, Agnes attended the talent show and low key sabotaged Wanda and Vision's magic show, all whilst keeping up appearances and making jokes about her husband Ralph.

Agnes was talking to Herb outside of the Vision residence, having freed him from his enthrallment and whispering to rouse Vision's curiosity. Together they planted seeds of doubt and confusion into Vision's mind.

Darcy Lewis recognised that the radiation from the Westview Anomaly mimicked television broadcast waves and tapped into the broadcast. Using the new visuals, they identified the real identities of most of the "cast" but were unable to find a match for Agnes.

Agnes, claiming to be on her way to jazzercise, stopped in at Wanda's home and offered to babysit as the twins were being audibly restless. Vision told her they didn't want her help. Agnes snapped out of character and asked Wanda if she wanted her to start over. Wanda, surprised by Agnes' awareness of the sitcom reality, insisted they let her look after the babies. Agnes tried and failed to soothe the boys to sleep and started hunting for dark liquor "for the twins". The boys aged themselves up and Agnes drank the liquor herself.

Later, Agnes stopped by with a doghouse which was incredibly convenient as the boys had found a dog that they were desperate to keep. She helped them come up with a name for the dog.

When Sparky ran away, Agnes found the dog and killed it, wrapping him in a blanket and pretending he'd eaten some poisonous plants in front of the Maximoffs. The boys pleaded for Wanda to bring Sparky back, to Agnes' surprise and she asked if Wanda could do that. Wanda convinced her sons that it wasn't possible and that they couldn't just grow up when things got hard.

When Vision and Wanda were arguing and Wanda was trying to convince her husband that she wasn't controlling everything, Agnes used a crystallum possession on Ralph Bohner and sent him to Wanda's door posing as Wanda's dead brother Pietro Maximoff.

Vision found Agnes, dressed as a witch, sitting in her car, frozen at the edge of Ellis Avenue. Vision spoke to Agnes, believing that he had freed her from her enthrallment when in reality she was just acting, and learned that he was an Avenger and that he had died. She began cackling maniacally forcing Vision to "restore the enthrallment". Agnes then drove away after filling Vision's mind with doubt which spurred him to try and leave Westview.

Agnes offered to look after the twins so that Wanda could relax, taking them back to her house where she gave them sandwiches and let them watch kids' television.

Later, Agnes overhead Wanda and Monica Rambeau having a confrontation and intervened, taking Wanda inside. Wanda noticed that the twins were missing and Agnes idly dismissed it, telling her that they were probably playing in the basement. Wanda went looking for her sons and was met by Agnes who revealed her true identity of Agatha Harkness to Wanda. Agatha explained that she was behind many of the mishaps that had been happening around town.

Agatha restrained Wanda, who couldn't use her powers in the basement due to the runes in the walls. Agatha demanded to know how Wanda was capable of the magic that she was wielding but Wanda had no answers. Agatha used a strand of hair to open a doorway into Wanda's past and used the threat of Wanda's missing sons to get her to relive her past trauma to try and work out how Wanda created the Hex.

Having seen what she needed, Agatha left Wanda's memories and took the twins to the street, keeping them at the end of magical leashes, choking them. She told Wanda that she was the mythical Scarlet Witch.

Wanda attacked Agatha to free her children. A second attempt to attack the witch revealed that Agatha was able to absorb magical power and lifeforce. Agatha tried to make a deal with Wanda, claiming she would maintain the Westview anomaly and even correct the problems, all Wanda had to do is surrender her power to her. Wanda levitated a car and flung that at Agatha.

Agatha went to the town square and when Wanda followed, Agatha lectured her about the myth of the Scarlet Witch and how she would destroy the world. She began freeing the townspeople from their enthrallment forcing Wanda to open the Hex, causing her family to start to disintegrate. Wanda closed the Hex again to save her family. Agatha attacked them and Wanda created a magic barrier which Agatha siphoned.

Wanda tried to defeat Agatha by playing to her fears, revisiting Salem in 1693 but Agatha turned the tables on Wanda. Agatha once again offered to maintain Westview and her family if Wanda just gave up her powers to her. Wanda attacked Agatha and brought them out of the hallucination, continuing their fight in Westview.

Wanda told Agatha to take her power, claiming she didn't want it, blasting energy all over, half of them not even hitting Agatha and the ones that did got absorbed by the witch. Agatha drained the energy from Wanda until she was almost a husk. She taunted Wanda, stating that you can't fix a spell once it has been cast and she had lied. Agatha tried to cast a spell but was unable to, Wanda had deceived Agatha and etched the runes into the walls of the Hex, meaning that Agatha couldn't cast any spells.

Wanda reabsorbed her magic from Agatha, embracing the power of the Scarlet Witch. Agatha and Wanda returned to the streets where Agatha told her she had no idea what she had done and that she would need her help moving forwards. Wanda told her that if she needed Agatha's help she'd know where she was and transformed the witch back into her Agnes persona, trapping her in her own body. 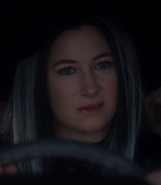 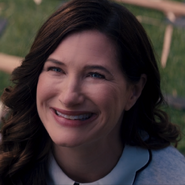