"A View in the Dark"

"Smoke & Mirrors"
"Better Angels" is the third episode of the second season of Agent Carter.

Peggy's search for the truth about Zero Matter puts her on a collision course with her superiors as Howard Stark barnstorms in.

Agent Carter and the SSR investigate Dr. Wilkes' house. The find evidence inside that he is a Russian spy, including a weapon similar to the one that killed the SSR agents moving Jane Scott's body. Although the cops and the media buy into this story, Peggy believes Isodyne is trying to set Dr. Wilkes' up as a patsy to cover their research into Zero Matter. To clear Jason's name, Peggy and Jarvis recruit Howard Stark, who is busy shooting a film based on the comic book character Kid Colt. They show him what they've found in their investigation so far, including the film reel of Zero Matter's discovery, but Howard takes a particular interest to the tie pin. He recognizes the symbol as belonging to the Arena Club, a social organization of rich, white men who have sought after his membership in the past.

Peggy and Chief Sousa arrive at the office the next day to find Jack Thompson in Sousa's office. Thompson has taken it upon himself to close the case and edit Peggy's report of the incident at Isodyne labs so Peggy isn't labeled a Communist and embarrasses the SSR. A furious Peggy leaves the office without noticing a keychain floating on her desk. Later that day, Jack Thompson watches the film reel from Isodyne when he is interrupted by a visit from Vernon Masters. He tells Thompson he needs his help in recovering materials Dr. Wilkes stole from Isodyne. Thompson is a first reluctant to work give over evidence to Vernon, but Masters tells him that preventing that material from falling into the wrong hands is worse than ignoring rules of evidence.

Peggy continues the her investigation despite Chief Thompson's orders. Howard goes to the Arena Club and pretends he wants to join before he has Jarvis bring in a large group of women, of which Peggy is one. Peggy slips by the club's employees and goes to their back rooms to start planting bugs. She sees Calvin Chadwick and a group of other men leave a board room behind a secret door. Once they've all left, she sneaks into that room, and finds two newspapers dated for the next day that show Calvin Chadwick's opponent is dropping out of the election. She also finds there are some sort of counter-measures in place that short out all of her devices. While she's under the table trying to plant a bug, Rufus Hunt, the club's muscle who tried to kill her and Dr. Wilkes, comes into the room. Peggy manages to get by him, but once she's back in the hallway she comes face-to-face with another guard. Jarvis shows up just in time to make it sound like she was simply separated from the rest of Howard's group.

Back at the office, Chief Thompson is furious that Agent Carter would investigate the Arena Club despite the case being officially closed. When she has no evidence to back up what she saw, Thompson accuses her of letting her emotions cloud her judgment, so Peggy accuses him of simply being a coward, of being afraid to get on the bad side of any powerful person. Thompson orders her to clear out her desk and return to New York. Sousa follows her out of the office to calm her down. They notice that certain items on Peggy's desk are levitating, leading Peggy to realize she could be contaminated by the Zero matter.

Peggy and Sousa go to Howard Stark, who finds out the contamination is only on one side of her body. They go to his lab, where Howard comes up with a silver nitrate solution that should reveal the source of the contamination. To their surprise, the contamination is Jason Wilkes, who has been made invisible and intangible by the Zero Matter. Jason tells them about what happened at Isodyne, including that Whitney Frost was there, before the silver nitrate wears off and he disappears again. While Howard and Jarvis work to make Jason corporeal again, Peggy confronts Whitney Frost about the night of the explosion. Frost is able to evade all of Peggy's questions before her director interrupts them and tells they're ready for her on set.

That night, Whitney tells her husband about what happened with Peggy. Calvin dismisses her concerns and says he'll report it to the Council, but Whitney begs him not to go through official channels and use Rufus Hunt instead. Calvin agrees to her plan when she pretends to cry because of how Peggy treated her. At the Stark mansion, Peggy is exercising late when a masked Rufus Hunt ambushes her from behind and starts to strangle her. Peggy gets out of his hands by dropping the both of them into Howard's pool, but Hunt is still more than a match for her. Luckily, Jarvis is nearby to distract Hunt, giving Peggy the space she needs to crawl over to her gun. She sends a bullet through Hunt's hand before he runs away.

The next morning, Peggy finds Howard (who hasn't slept) and Jason still in Howard's lab. Howard says he's leaving for Peru to find his mentor in hopes he could help Jason. Jason also wants to leave to protect Peggy, but she insists that he stay. At the office, Sousa brings Peggy up to speed on his investigation. He's uncovered Isodyne's "secret weapon," a woman named Agnes Cully who developed the technology that put the company on the map. But what's most interesting about her is that she's more famous for her stage name - Whitney Frost. Meanwhile, Vernon Masters thanks Chief Thompson for turning over the footage film reel of Zero Matter by taking him to the Arena Club. While their, Thompson meets Calvin Chadwick, and reads the newspaper headline that Peggy told him she saw there the previous day. At the film studio, Whitney Frost's director freaks out when he discovers the scar on her face left by the Zero Matter. She grabs his arm to calm him down, but the Zero Matter consumes him and is pulled back into Whitney Frost's body. 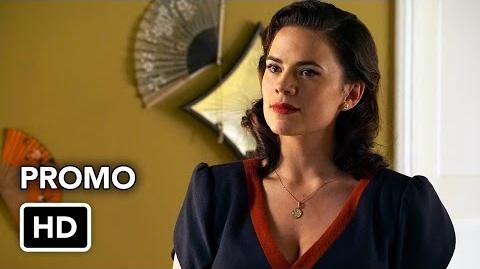