"Paradise Lost" is the sixteenth episode of the third season of Agents of S.H.I.E.L.D..

S.H.I.E.L.D. hunts for information on their dangerous new enemy, and a shameful secret from Malick's past is exposed, threatening to destroy his HYDRA legacy.

On the day of their father's funeral in 1970, Gideon and Nathaniel Malick are taken to see Daniel Whitehall. The Malick brothers share their father's poor opinion of Dr. Whitehall, whom they view as a part of a different Hydra wasting away in a prison cell. Whitehall tries to convince the boys to leave the "archaic" Hydra devoted to bringing back their Inhuman founder and instead join his modern, scientific Hydra. Seeing the boys' belief in the Hydra religion unshaken, Whitehall suggests their father somehow rigged the ceremony so he would never be sacrificed to the Inhuman, and that the boys might find some evidence of this in their father's copy of Paradise Lost.

Nathaniel looks in his father's library that night and finds a white rock, the lot drawn by the person who was to be sacrificed, with a notch just where Whitehall said it would be. Their father would feel for the notch during the ceremony, allowing him to avoid drawing the white rock. The boys agree to stay within the Hydra faith and conduct the ceremony the right way; to stay together to the end. Although they seem to dispose of the rock, Gideon holds on to it and uses it in the next ceremony. The Malick brothers are the last two to draw lots, and Gideon, feeling the notch on the white rock, draws one of the safe, black rocks, effectively sentencing his brother to be sacrificed.

In the present day, Gideon Malick arrives at his estate to see Hive has invited himself in and introduced himself to Malick's daughter Stephanie. Although Stephanie is excited by their "guest"'s presence, Gideon only appears to be shaken by his appearance. Malick tells his daughter of the vision another Inhuman gave him, a vision of his own death at the hands of their "guest." Stephanie, without a second thought, dismisses her father's concerns as foolish. Meanwhile, S.H.I.E.L.D. is still reeling from the revelation that the creature on Maveth made it back to Earth in Grant Ward's body. FitzSimmons study the corpse of one of his victims, finding the remains of tiny parasites that ate the man alive. Coulson prepares the team to go on two separate missions. Daisy and Lincoln will see a former Inhuman from Afterlife who may know something about the Inhuman in Ward's body. The Inhuman, James, was exiled from Afterlife when he broke into Jiaying's archives to an ancient Inhuman they believe to be the one in Ward's body. The rest of the team will go to Michigan to search a Transia Corp facility taken over by HYDRA.

Zephyr One drops Daisy and Lincoln off in South Dakota. James lives in a trailer isolated from the rest of society, and used his expertise in demolitions to booby-trap the land around his trailer with landmines. Daisy steps on one, but uses her powers to hold off explosion until she can get far enough away before remotely setting them all off. James shoots at them, but Lincoln knocks him out with a bolt of electricity. When James comes to, Lincoln offers him a Terrigen crystal in exchange for information about the ancient Inhuman. Since Jiaying exiled James before he could undergo Terrigenesis, the promise of finally receiving his powers convinces James to tell them what he knows. He shows them a Kree device that dates back from when an army of Inhumans led by the ancient Inhuman who they called "Alveus" rebelled against their Kree masters. Despite holding up his end of the bargain, Lincoln refuses to give James the crystal because of how dangerous he could be with powers. James sneers back at Lincoln, asking him if he could finally kill someone with the electricity in his body. Lincoln storms out of the trailer with Daisy before James has can explain what he meant by that.

That night, the members of HYDRA's inner circle gather at Malick's estate to be introduced to their "god." When one member of the inner circle doubts this is HYDRA's Inhuman founder, Hive peels away Grant Ward's face to show them his true form a mass of writhing tentacles surrounding his head. Elsewhere the rest of the S.H.I.E.L.D. team arrives in Michigan. Security camera footage shows them that Giyera is inside the facility. When S.H.I.E.L.D. raids the building, they trap Giyera in a room with May, giving him nothing to use his powers on to fight her with. Giyera, however, proves to be an incredibly gifted martial artist as well, and almost gets the best of May before he's eventually beaten. S.H.I.E.L.D. takes Giyera into their custody, keeping him on the containment unit on Zephyr One, but he still appears to have some ability to manipulate objects outside the unit with his powers. Simmons, meanwhile, uses the research into invasive species the team recovered from the Transia facility to reason that the Inhuman in Ward's body doesn't control the parasites she found on his victims, but are in fact the Inhuman himself. Coulson takes this news hard, as he sees his decision to kill Ward has literally come back to haunt him.

At Malick's estate, Malick's "guest" shows signs that he has Nathaniel's memories. Hive gives Stephanie a copy of Paradise Lost, the same book Gideon's father hid the notched white rock. Malick begins to realize that the Hive will kill him for betraying his brother Nathaniel all those years ago. When Gideon believes the time has come, Hive shows he has invited Stephanie to what witness what Malick believes will be his final moments. Hive speaks to Gideon as Nathaniel and reveals her father's cowardice to Stephanie. Gideon prepares to die so his daughter would not remember him as he remembers his father, but Hive kills Stephanie instead so Gideon can know the true meaning of sacrifice.

On aboard Zephyr One, Giyera uses his powers to escape from the containment unit. He easily overpowers the S.H.I.E.L.D. agents standing in his way and makes it onto the Zephyr's bridge. Agent May holds him at gunpoint and tells him it's time to stop fighting. Giyera appears to surrender, but then uses his powers to force the plane down. Giyera pulls the plane into a hanger that opens up in the water. Most of the S.H.I.E.D. team is knocked out during the landing, but May is conscious enough to send out a distress call to Daisy. Meanwhile, Lincoln confesses to Daisy that before he joined Afterlife he almost killed his previous girlfriend in a drunk driving accident. Daisy receives May's call, but has no idea how to save the rest of her team. Lincoln, however, comes up with an idea the Secret Warriors.

Back at Malick's estate, Hive tells a clearly distraught Malick that Giyera captured the S.H.I.E.L.D. plane. He reminds Malick that they are even with Stephanie's "sacrifice," and that they will now be together to the end. 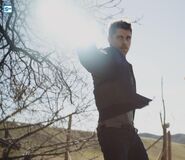 Add a photo to this gallery
Retrieved from "https://marvel-movies.fandom.com/wiki/Agents_of_S.H.I.E.L.D._Episode_3.16:_Paradise_Lost?oldid=242692"
Community content is available under CC-BY-SA unless otherwise noted.