"Uprising"
"Meet the New Boss" is the second episode of the fourth season of Agents of S.H.I.E.L.D..

Daisy sets out to battle Ghost Rider, but at a terrible cost; the new director's bold agenda shocks everyone.

The ghost-like woman who escaped from the box wakes up a young boy in the middle of the night. The boy follows the ghost into his living room, waking up his father. The boy's father tries to calm his son down, but before they can go back to bed the ghost appears before them. She demands to know what they are doing in her house and calls out to someone named "Joseph" to take care of them. The woman passes through the boy's father. He then sees his son's face twist into a demonic shape. The ghost woman "Lucy" shows up at the abandoned energy lab. She finds and opens three other boxes similar to the one she was trapped in, freeing three other ghost-like people Hugo, Frederick, and Vincent. They blame Lucy and her connection to something known as the "Darkhold" for what happened to them. Lucy, Hugo and Vincent go off to find Joseph, while Frederick volunteers to stay behind and destroy the lab.

At the Playground, FitzSimmons examine the box they recovered from the Chinese gang. They can't seem to figure it out until Mack shows them a picture from the last night showing the ghostly woman behind Chen, proving what the gang members saw is more than just a hallucination. Meanwhile, Coulson and May meet with S.H.I.E.L.D.'s new director, Jeffrey Mace. They expect him to reprimand them for keeping a mission to capture Daisy a secret from him, but to their surprise he says he's impressed with their work. The Director, does, however, remind them that a former S.H.I.E.L.D. agent robbing banks would be bad press in light of the announcement that they are a legitimate agency again. The Director then excuses May so he can talk with Coulson in private. As she leaves, May sees the Director's face contort into the demonic shape. With May gone, the Director asks for Coulson's help in getting S.H.I.E.L.D. the near-unlimited funding it had when he was in charge.

Robbie Reyes shows up for work at Canelo's Auto and Body. He notices a Daisy's van parked outside the lot for most of the day. Robbie goes to confront her, but she is no longer in the car. He goes inside the shop and finds her talking with Canelo. She turns her attention to Robbie, pretending to be an old friend of his from when he was still in school. Really, she is just letting him know she's looked into his history without letting his coworkers know what is going on. Daisy tries to talk to him about his powers, but he insists he isn't an Inhuman and that he actually sold his soul to the Devil to become the Ghost Rider. Robbie warns her not to anger him, but once they're alone he attacks her for something she said about his brother Gabe. He knocks her out without turning into the Ghost Rider. When she comes to, Daisy finds herself tied up and Robbie going through her things. He says he's looking for some proof that she does deserve to die, like she begged him to do when they first fought. Daisy tells Robbie about the skinheads stealing the box from an abandoned energy lab in Pasadena. Robbie puts duct tape over her mouth and leaves her to go to Pasadena. Daisy uses her powers to first break free an then propel herself onto Robbie's car. A burst of Robbie's fire sends her flying from the top of her car, letting Robbie drive off without her.

Mack and FitzSimmons track a metal the box is made out of to a lab in Pasadena. Mack and Fitz take off in a Quinjet while Simmons stays behind to help Coulson and the new Director give a group of Congressmen a tour of the Playground. May talks to Chen about the faces they see. Chen goes crazy and starts bashing his head against the door of his cell. Simmons has him tranquilized, but she also gets concerned about what May was doing there. She tells Coulson about May and diverts the tour group from taking a visit to the containment cells. Coulson finds May in the locker room. She's clearly losing her mind and tearing up the lockers looking for something that infiltrated the Playground. Coulson tries to lead her to Simmons' lab. When they pass through the gym, May sees the faces of her students and Coulson take on the demonic shape. She tries to fight them all, but ends up face to face with the new Director. He shrugs off all of her attacks as if they were nothing, revealing himself to be an Inhuman with enhanced strength. He easily picks her up and slams her against a pillar to knock her out.

Fitz and Mack arrive not long afterwards. Fitz notices the lab's nuclear reactor is going critical and tries to stop it. Before he can, Frederick phases through a wall and attacks them. He traps Mack in the reactor, and is about to get to Fitz when Robbie grabs his arm. Fitz and Mack watch in awe as Robbie transforms into the Ghost Rider. They come to their senses and try to get Mack out of the reactor, but Fitz isn't strong enough to open it. Daisy shows up just in time to use her powers on the door and free Mack so Fitz can stop the meltdown. They watch as the Ghost Rider incinerates Frederick. Before he leaves, the Rider takes a picture off the wall of Lucy and the other ghosts from when they were employees at that lab.

Mack takes Daisy back to the Quinjet to put a splint on her arm. He asks her to come back with them so she can use S.H.I.E.L.D.'s drugs that will help the bones in her arm heal faster. Mack realizes Daisy has been these drugs all along, and that Yo-Yo has been stealing them from S.H.I.E.L.D. for her. She thanks him for the splint, and then leaves. Back at the Playground, the Director says goodbye to the tour group. Coulson wants to talk with him about May, but the Director assures him that he already has something planned for her. The new director reminds his predecessor that his promotion was Coulson's idea that when he stepped down as director he recommended the new face of S.H.I.E.L.D. be a powered person, a "hero," now that Steve Rogers is missing. The Director wants Coulson to be one of his top advisors, but he knows that, when it comes to people like May and Daisy, Coulson cannot be objective. May is restrained on the Quinjet carrying the Congressmen away from the Playground, shouting to get them away from her.

Some time later, Robbie finds Daisy and tells her he thinks he is what is connecting the Chinese and skinhead gangs. She gets into his car with him then they drive off together. 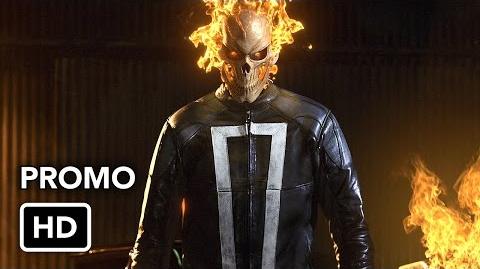 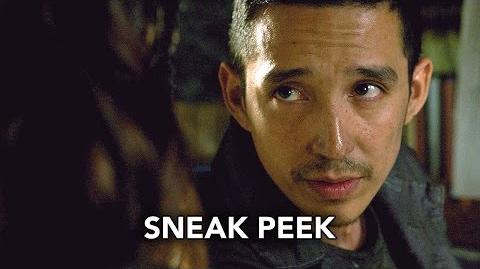 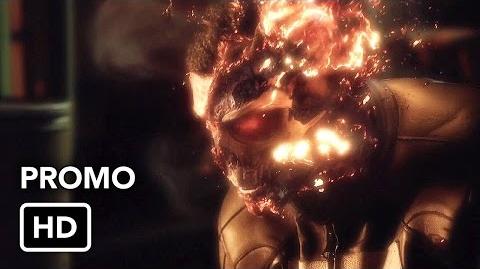 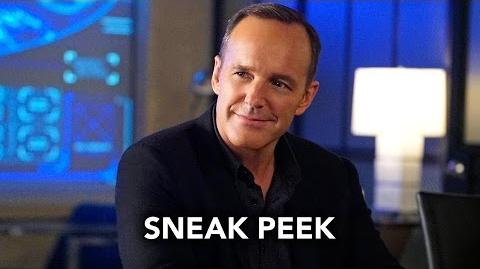 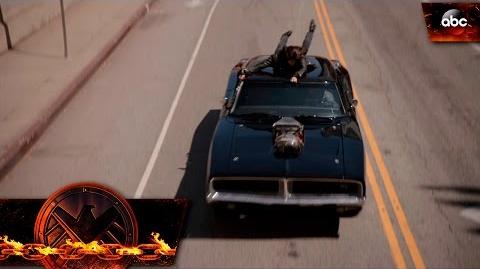 Daisy Jumps on the Hell Charger - Marvel's Agents of S.H.I.E.L.D. 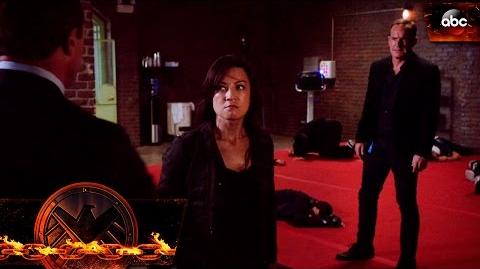 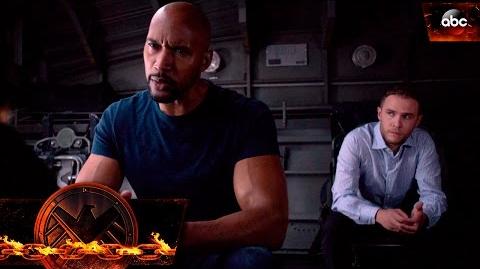 Fitz and Mack Feel Betrayed by Daisy - Marvel's Agents of S.H.I.E.L.D.
Community content is available under CC-BY-SA unless otherwise noted.