"Lockup" is the fifth episode of the fourth season of Agents of S.H.I.E.L.D..

Robbie Reyes attempts to control the Ghost Rider; S.H.I.E.L.D. breaks into a high-security prison to decipher the secrets that are haunting them.

Years ago, Lucy and Joseph Bauer find the Darkhold buried in the basement of an abandoned house, the family home of the person who killed the book's previous owner. They excitedly open the book, but find the pages are blank. When words begin to appear on the pages, they soon realize they're each seeing the words in their first language - Lucy in English and Joseph in German as if the book was reading them. In the present day, agents Coulson and Mackenzie see Joseph in his hospital bed to ask him about the Darkhold. Joseph's encounter with the ghost of his wife has left him in the same paranoid condition as Melinda May and Chen. Before he dies, Joseph tells them that he buried the book in the same place he found it and that it's too late for them to get it before Lucy. Meanwhile, Lucy finds the book buried beneath the same basement, but when she tries to read it the pages remain blank.

The team decides they need to speak to Eli Morrow again since he's the only person who knows about the book and what Lucy wants with it. Robbie, angry that Coulson has ordered he stay on the plane, storms off to an isolated part of the Zephyr. He finds Daisy, who is trying to keep her distance from her former comrades out of fear of getting close to them. Coulson and May arrive at the prison to speak with the warden about S.H.I.E.L.D. taking Eli Morrow into their custody. However, the agents do not realize Lucy Bauer and the other ghosts have already arrived at the prison and driven the warden and the prison staff insane, so once the warden has them in his office he shoots at them with a shotgun. Realizing what's happened, Coulson and May fight off the warden and barricade themselves inside his office before sending a distress signal to the Zephyr.

Mack, Daisy, and two other S.H.I.E.L.D. agents prepare to storm the prison and retrieve Coulson, May and Eli Morrow once Fitz arrives in a quinjet with an antidote to the psychosis the ghosts induce in their victims. Mack reluctantly agrees to let Robbie come with them at Daisy's insistence as he is the only one of them who can fight the ghosts, even though Mack has his doubts Robbie will be able to control himself and the Ghost Rider within. They split up into two teams, Daisy and two other S.H.I.E.L.D. agents find Coulson while Mack and Robbie grab Eli Morrow, who they assume the ghosts are targeting. Once inside, Robbie recognizes one of the prisoners as a member of the Fifth Street Locos. Mack promises Robbie that he'll put him down if he loses control of his powers, but Robbie assures him he won't use them sparingly to keep his secret hidden from his uncle.

At the Playground, Simmons is worried about how she will keep Aida a secret from Director Mace, especially with a polygraph test coming up. When she struggles with a question about hiding information from the director, Jeffrey Mace interrupts the test and orders she come with him. At first she thinks the director will force her to reveal what she's hiding from him, but it turns out Mace only wants Simmons to help him in a televised debate with Senator Nadeer about the "Inhuman War on Humans." The host of the debate introduces the director by bringing up his heroic actions at the U.N. bombing in Vienna. Mace handles Senator Nadeer's accusations against Inhumans well, but trips up when she mentions the situation in the prison outside Los Angeles something she should have no knowledge of. Once Director Mace gets fed up with Senator Nadeer's accusations, he publicly reveals himself as an Inhuman.

Back at the prison, Mack and Robbie are cornered by the two ghosts following Lucy. Robbie destroys them both, but not before one of them infects Mack with the psychosis. Mack gives himself the antidote when he sees Robbie's face distort into a demonic shape. Meanwhile, Daisy and the other agents "rescue" Coulson and May, even though they didn't seem to be in any danger. While on their way to an exit, they pass through a wing of the prison holding members of the Watchdogs. The ghost of Lucy Bauer cuts them off and lets the Watchdogs out of their cells. The inmates chase the agents through the prison, leading to the cafeteria. Daisy locks Coulson and May out of the cafeteria so she can fight the Watchdogs alone. Daisy holds her own against them even though her arms are too damaged for her to use her powers. The Watchdogs eventually overwhelm her, but Coulson and May who found another way into the cafeteria with Fitz' help save her just in the knick of time.

As the situation in the prison deteriorates into a riot, Mack tells Robbie and Eli to go on without him so he can help some trapped members of the prison staff. Robbie sees the member of the Fifth Street Locos he recognized earlier on his way out, and tells his uncle to get out of there so he can finish something. With his uncle gone, Robbie confronts the prisoner, who is simply reading a Stephen King book in his cell rather than rioting like the other inmates. Robbie asks him if he knows anything about a drive-by the Fifth Street Locos conducted on a pair of kids that ended with the gang lighting their car on fire. The prisoner reveals the driveby was actually a hit, but is unable to reveal who ordered the hit and everyone who would know is already dead. Robbie turns into the Ghost Rider and incinerates the gang member, finishing off the Locos once and for all. The rioting prisoners see this and return to their cells terrified of the Ghost Rider. S.H.I.E.L.D. regroups outside of the prison, but Eli Morrow is nowhere to be found. Lucy Bauer got to him first and kidnapped him so he could read the Darkhold to her.

While celebrating his approval numbers' rise after the debate, Simmons asks the director to be excused from future interrogations. She noticed a micro-expression the director made during the debate, revealing his story about Vienna as a lie. Mace exempts Simmons from any future lie-detecting tests once she threatens to reveal his secret. On the plane, May scolds Daisy for taking on the Watchdogs by herself as "suicide," reminding her that this isn't what Lincoln would want. Coulson will always be there for her, she says, like how he was there for May when she locked herself in her cubicle.

Elsewhere, Director Mace gets into a car with Senator Nadeer. She shows him security footage of the prison showing S.H.I.E.L.D. working with Quake. Even worse, she has the Ghost Rider on film. She doesn't know what he is, but knows he is a killer, and shows Mace the pictures of what the Ghost Rider did to the Loco, a model prisoner set for an early release. When she threatens to give this footage to ABC News, the director asks Senator Nadeer what she wants from him. 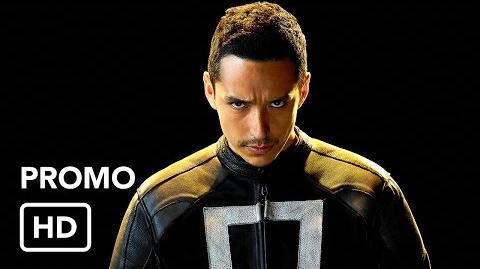 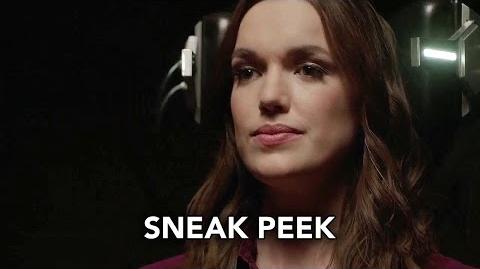 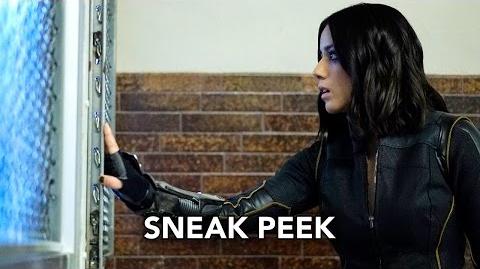 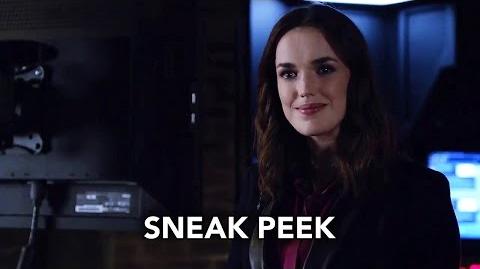 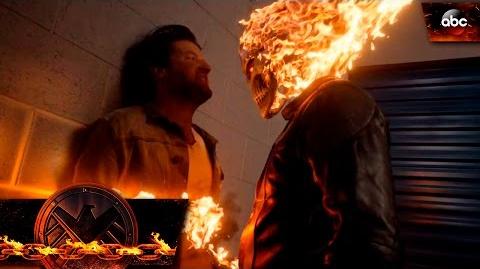 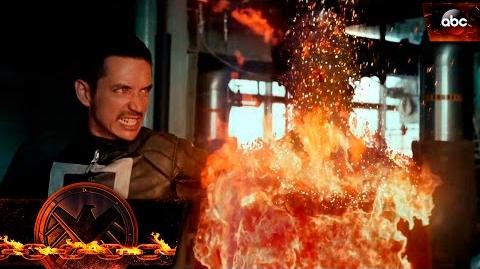 Kick@$$ Move of the Week Mack and Robbie GhostBust - Marvel's Agents of S.H.I.E.L.D. 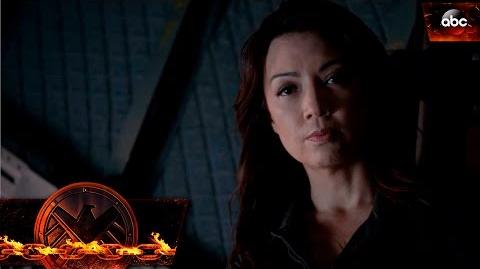 Daisy and May's Heart to Heart - Marvel's Agents of S.H.I.E.L.D.
Retrieved from "https://marvel-movies.fandom.com/wiki/Agents_of_S.H.I.E.L.D._Episode_4.05:_Lockup?oldid=253595"
Community content is available under CC-BY-SA unless otherwise noted.