"The Patriot" is the tenth episode of the fourth season of Agents of S.H.I.E.L.D..

Coulson and Mack discover a shocking secret about Mace, which leaves all of S.H.I.E.L.D. in a dangerous position.

Director Mace holds a press conference welcoming Agent Daisy Johnson back into S.H.I.E.L.D. in a town in Pennsylvania she saved from the Watchdogs. Brigadier General Talbot gives Agent Burrows a briefcase, handcuffing it to the agent's wrist to ensure its safety. Mack and Coulson, who are working security, notice a S.H.I.E.L.D. agent who is supposed to be watching the event from the roof of a nearby building is missing. A sniper fires at Mace from that rooftop, but the director blocks the shot with his podium. Mace realizes the bullet is an explosive, and throws his podium into the air before it explodes. Daisy uses her powers to launch onto the rooftop and tackle the sniper. Coulson and Mack sneak Mace and Burrows out through the now-chaotic crowd, taking them to a quinjet that will get them to a safe location.

Elsewhere, Fitz leaves Dr. Radcliffe's house with everything he needs to study what is left of the first Aida's model. Once he's gone, Radcliffe plans his next move to get the Darkhold with the new Aida's help. Radcliffe appears to upset the LMD by dismissing her ideas and generally talking about her predecessor's work like she was a failure. They check in on Agent May, who is being held in a secret room, strapped to a device that plays a scenario in her subconscious to keep her calm. Later, Agent May wakes up from the scenario, and rips out the wires connecting her to the device. Aida blocks her escape. Radcliffe orders her to sedate May rather than kill her. Once she's down, Radcliffe and Aida hook her back into the device, this time thinking that May's violent temperment means she would be calmer if the scenario playing in her head was of a fight rather than of something relaxing.

Daisy returns to the Playground with the sniper and General Talbot. They discover the sniper is Yuri Zaikin, a former operative of Hydra and the KGB. Zaikin refuses to give up who he is working for and why they wanted to kill Director Mace, but he does suggest that his attempt was only the first phase of a larger plan. Meanwhile, an explosion rips a hole in the side of Director Mace's quinjet, taking Burrows and the briefcase with it. The quinjet crashes, killing the pilot, leaving the director, Coulson and Mack stranded in the wilderness. Mace's first instinct is to find Burrows, even though he is certainly dead. Mack and Coulson think what he really needs is the briefcase.

Back at the Playground, Talbot has taken over operations in Director Mace's absence, butting heads with Simmons, the highest-ranking agent at the facility. Once they see the Director's quinjet disappear, Talbot orders LMD May and Daisy take the Zephyr and rescue them. Talbot tries again to get information out of Zaikin, but fails. While venting his frustrations to FitzSimmons, Simmons gives herself access to Mace's confidential files, discovering one labelled "Project Patriot." His hand forced, General Talbot reveals what this project is once FitzSimmons clears out the lab. He tells them that Director Mace is not an Inhuman! When Coulson recommended an enhanced person take his place as Director of S.H.I.E.L.D., Talbot and the President found there were no good options to replace him. They instead made one out of Mace, already famous for his heroics in Vienna, by modifying the formula recovered from Daisy's father, Calvin Zabo. They took out all the "bad stuff" so the formula wouldn't drive him insane, and it was also calibrated to his DNA so no one else could use it. If Mace doesn't receive a regular dosage of the formula, which Burrows keeps in the briefcase, he reverts back to his normal level of strength.

Meanwhile, the Director, Coulson and Mack find a truck filled with heavily-armed thugs patrolling the area they crash-landed. There is a scrambler on top of the truck that Coulson recognizes as Hydra technology. The truck finds Burrows' corpse and the briefcare before they can. Mack and Coulson plan on taking out a few of the thugs from behind while Mace makes a direct assault on the truck, not knowing that the director does not have his enhanced strength. Mace instead grabs the briefcase and runs away with it, leaving the other agents confused as to why he didn't just crush them. Mace opens up the briefcase and tries to use the formula, but the ex-Hydra thug following him accidentally destroys both syringes. Mace tries to fight the thug, getting shot in the leg in the process, but Mack and Coulson have to save him. The director reveals his secret to his two subordinates before they hide in a nearby ranger station to prepare for the next round of those heavily-armed thugs.

Back at the Playground, Simmons and Talbot use Aida's decapitated head to get Zaikin to talk. He reveals he and several other former Hydra operatives were hired by the Watchdogs to assassinate Director Mace and recover his briefcase. Other operatives shot his quinjet down over rural West Virginia, far from where Daisy and May were looking. Before they can get there, however, Coulson has to come up with a plan to protect themselves from the Hydra operatives. Realizing that the thugs still think Mace has enhanced strength, Coulson has the director get into his combat armor to intimidate them into not fighting. While Mace keeps them occupied, Mack takes one down and grabs a grenade to destroy the truck scrambling their devices. Coulson and Mace barricade themselves inside the ranger station once the explosion alerts the thugs to their plan. Just as they start to run low on ammo, the Zephyr arrives with Daisy and May. Together, the agents fight off the rest of the Ex-HYDRA operatives. At the Playground, Fitz downloads information from Aida's head in hopes that it could reveal what really happened to her.

Once they're back at the Playground, Coulson confronts Talbot about the truth behind Director Mace's abilities. Talbot insists it was necessary for him and the President to make their own enhanced person to lead S.H.I.E.L.D. The Director asks Talbot to leave him and Coulson alone. Mace reveals that he wasn't even a hero in Vienna when the explosion happened, he tripped while trying to get to safety. He didn't even realize the woman he "saved" was there. Everyone brushed off his admission that it was an accident as modesty, and he liked that people treated him like a hero. And when Talbot came to him with the offer to turn him into an actual super hero, he saw that as an opportunity to be the face to end Inhuman prejudice. Mace then tells Coulson that he will call a press conference to resign and re-instate him as the Director of S.H.I.E.L.D. Coulson, however, tells Mace to continue being director, playing the hero for the public and playing politics. But when it comes to operations, Coulson calls the shots.

Later, May alone in the locker room, looks at a wound on her back she received while fighting the Hydra thugs. The wound is deep enough to reveal some of the circuitry under her skin, and she hides this from Daisy when she comes looking for her. 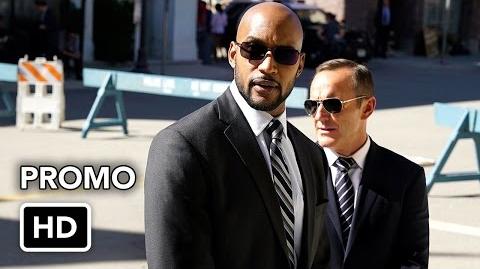 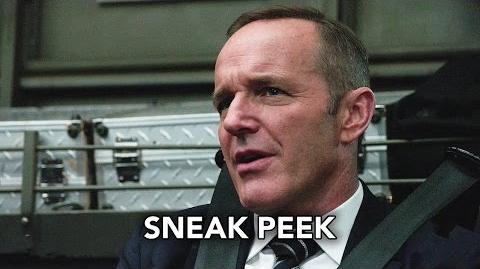 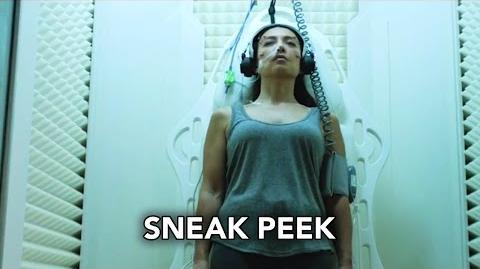 Retrieved from "https://marvel-movies.fandom.com/wiki/Agents_of_S.H.I.E.L.D._Episode_4.10:_The_Patriot?oldid=186582"
Community content is available under CC-BY-SA unless otherwise noted.