"A Life Earned"
"A Life Spent" is the third episode of the fifth season of Agents of S.H.I.E.L.D..

Daisy decides she will rescue Simmons – even if it means risking everything to do it.

Kasius receives his guests, but Lady Basha prefers to dine from the comforts of her own ship rather than on the backwater outpost. Furious at this disrespect, Kasius has Simmons prepare a young girl, Abby, for the coming ceremony so Lady Basha is not disappointed with his offering. Abby is an Inhuman who recently went through Terrigenesis, gifted with the ability to control the density of her body to the point that she intangible or as heavy as lead. Simmons helps her learn to control her newfound abilities. Even though Abby only has the barest minimum of control over her Inhuman powers, Kasius moves ahead with the ceremony anyway. He welcomes Lady Basha to the Lighthouse, and takes her to a part of the outpost that he's fashioned into an arena. Simmons watches on in horror as Abby is forced to face one of Lady Basha's champions in gladiatorial combat. Just as it seems Lady Basha's champion will kill her, Abby is inspired to continue the fight when she notices Simmons watching her. She uses her powers first to break the other fighter's arm, and then to stick her hand through his chest and crush his heart. Impressed with Abby's capability as a warrior, Lady Basha buys Abby from Kasius, paying a particularly high amount for her. Kasius and Sinara silence Simmon's outrage at Abby's fate.

The rest of the team struggle to adjust to life in Grill's employ. Coulson, May, Mack and Tess take the Trawler out to see why Virgil's notebook points out a specific region of Earth's remains without telling Grill of their real purpose. Grill, however, is suspicious that they're trying to cheat him, and sends his right-hand-man Zev with them to keep an eye on them. While Zev is busy in another part of the Trawler, Coulson finds a knob hidden in one of Virgil's trinkets. Tess uses the knob to open up a compartment, revealing a radio inside. Zev, however, catches them messing around with the Trawler. They knock out Zev and put him in the cargo hold so they could continue their search. Mack talks Tess out of killing him so he won't tell Grill what they did. The radio starts to pick up a heavily distorted message reflected off the part of Earth mentioned in the notebook. Before they can decipher it, however, they have to return to the Lighthouse because Zev cut the fuel lines.

Yo-Yo steals the Kree tablet from Grill's office and gives it to Daisy, who hopes to use it to rescue Simmons despite Deke's objections against starting a fight with the Kree. Daisy gets into a fight with a few Kree when they catch her near a greenhouse. As Daisy blasts her way closer to Kasius' quarters to find Simmons, walls suddenly come up around her to trap her in a hallway. As a gas fills the area to knock her out, Daisy sees Deke sold her out to the Kree. Kasius wonders how "Quake, Destroyer of Worlds" is on the Lighthouse. Before she loses consciousness, Daisy promises Deke she will kill him.

Zev rats out the team to Grill. As Grill threatens to kill them for what they did, Yo-Yo tells him Zev is carrying a gun, something the Kree have forbidden humans to carry. Grill finds the gun on him, causing him to lose his trust in Zev. Some time later, the team uses the radio to decipher the signal they picked up before. It's a clear message to Virgil, asking him if the S.H.I.E.L.D. team arrived safely. Strangely, the message seems to come from the Earth's surface, even though Tess swears nothing could possibly survive there. Meanwhile, Zev has been dropped on the Earth's surface, and is devoured by the Roaches. 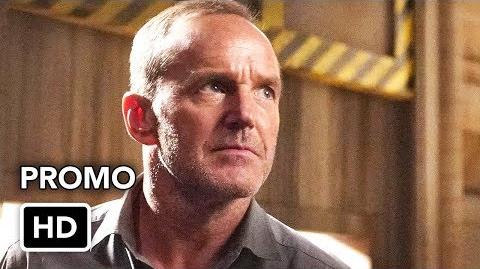 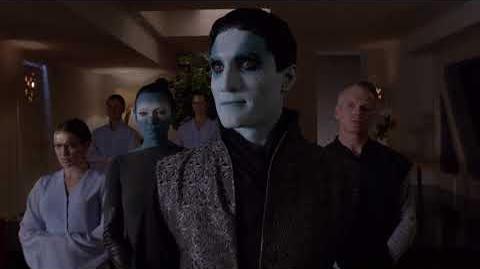 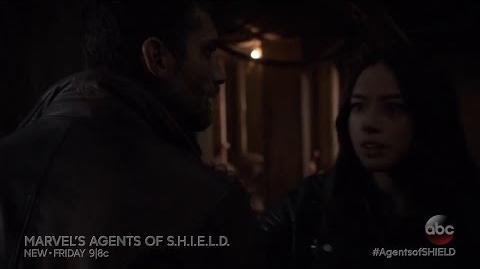 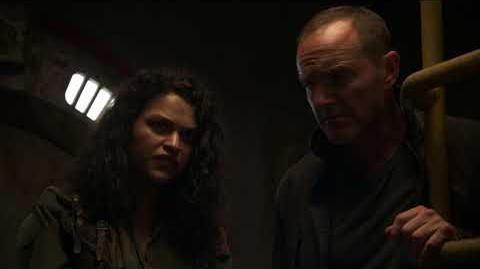 The Delegation - Marvel's Agents of S.H.I.E.L.D. 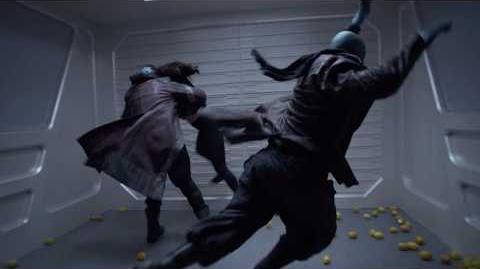 Fight Against the Kree - Marvel's Agents of S.H.I.E.L.D. 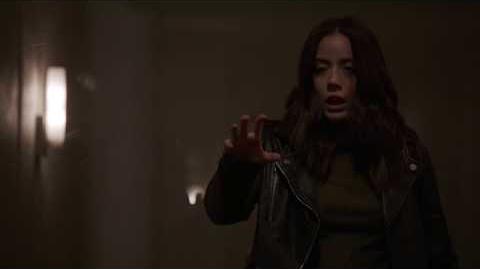