"Fun & Games"
"Rewind" is the fifth episode of the fifth season of Agents of S.H.I.E.L.D..

With help from Lance Hunter, nothing will stop Leo Fitz from finding the lost team as his secret journey is revealed.

Fitz is left behind in the diner after Enoch abducts the rest of the S.H.I.E.L.D. team. Moments later, he is arrested by the U.S. military for his supposed involvement in the attempted assassination of General Talbot. They take him to a high-security military facility to interrogate him about his friends' whereabouts; however, Fitz is as clueless as they are. Once he proves he is telling the truth about what he knows, the military begins to provide Fitz with materials so he could possibly figure out what happened to the team. Fitz uses this as an opportunity to send coded messages to Lance Hunter. The ex-S.H.I.E.L.D. agent shows up at the compound disguised as Fitz' lawyer to help him break out, which he does by blowing a hole in the interrogation room. They make their escape in an RV, unaware that the military is tracking them, believing they would lead them to the other fugitives.

While they're on the run from the military, Fitz reviews camera footage from the night his friends disappeared. Realizing Enoch's truck had been using different camouflage to evade traffic cameras, they're able to track Enoch's truck to his home. Enoch reveals he is a member of an alien species called the Chronicoms, and has been passively observing humanity's development for 30,000 years. He sent Fitz's friends to the year 2091 to fulfill a prophecy. Furthermore, Fitz can't follow them because the White Monolith doesn't activate on a whim and can only be used in the future. Because he cannot answer any more of their questions, Enoch takes Fitz and Hunter to meet "the Seer" who prophesied the Earth's destruction. Fitz is surprised to recognize the Seer as Robin Hinton, the young daughter of an Inhuman S.H.I.E.L.D. tried to help years before, who had recently undergone Terrigenesis. While Robin shows them her crudely-drawn visions of the future, they're surrounded by soldiers. Enoch helps them quietly get away using the same technology he used to abduct the team. The military soon realize what Robin is capable of and decide to capture her to exploit her abilities.

With Robin no longer safe from the military, Enoch takes her, her mother, Fitz, and Hunter to the Lighthouse still buried under an actual lighthouse on the shores of Lake Ontario. Robin tells Fitz he wasn't sent into the future with the rest of the team so he could save them. Now that Fitz is a part of the prophecy, Enoch tells him there is a way to get into the future using the pod he came to Earth in however, the pod is currently being stored at the same facility Fitz only recently escaped from. Fitz and Hunter break into the facility, and use a pair of ferrets to set off perimeter alarms to distract the guards. They find Enoch's pod in the same hangar where the military keeps the Zephyr. After they load the pod onto the plane, Fitz holds off the guards using the S.H.I.E.L.D. tech kept on board long enough for Hunter to get to the cockpit and take off. General Hale, the facility's commanding officer, executes two of her subordinates for their failure.

Fitz and Hunter take the pod back to the Lighthouse, where they pack an arsenal of weapons for their friends and hide it behind a panel for use in the future. Fitz is cryogenically frozen in the pod for 74 years. He wakes up on a Chronicom with Enoch in 2091, who informs him he has prepared a plan to face off with some of the most ruthless mobsters, monsters, and mercenaries in the galaxy. 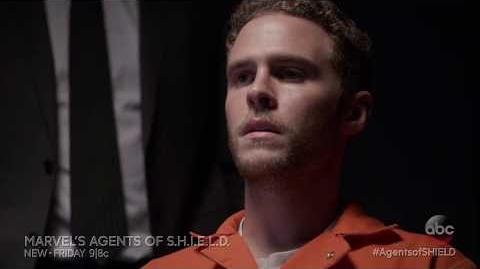