"Together or Not at All"

"The Last Day"
"Together or Not at All" is the seventh episode of the fifth season of Agents of S.H.I.E.L.D..

Just as the team reunites, they become prey to an undefeated Kree warrior bent on killing them all.

Daisy, Fitz, and Simmons try to escape from the Lighthouse. Fitz removes the implant from Simmons' ear while Daisy unable to use her powers due to her own inhibitor implant fights off the Kree guards following them. Their plans are thrown off, however, when the Kree destroy Enoch's ship to prevent their escape. Faulnak sends his warrior Maston-Dar after the agents of S.H.I.E.L.D. overruling his brother who wanted to send out Sinara. Kasius has been looked on with scorn by Faulnak and the rest of their family since he and Sinara abandoned their post during a battle when Kasius' warriors were outnumbered and his generals were dead at his feet. On the surface, Enoch saves May from a Vrellnexian. A mysterious individual scares away the rest of the roaches, and captures Enoch and May.

Maston-Dar ambushes the S.H.I.E.L.D. agents as they discover Gravitonium is the source of the Lighthouse's artificial gravity. They get away, but Fitz is wounded. They run into Deke, having recently freed himself from the room where Coulson trapped him, and he offers to help them escape. They reunite with Coulson, Mack, and Yo-Yo, who are still hiding from the Kree looking for Flint. They plan to get to the surface to find May and get back to their own time, but they discover Flint left on his own to confront the Kree and avenge Tess' death. The young Inhuman pretends to surrender to the Kree Vicar, only to kill him with a sharp rock formed from pebbles he hid in his pocket. The rest of the team rescues him from Sinara when she uses him as bait to lure them out.

With Sinara and Maston-Dar right behind them, S.H.I.E.L.D., Flint, and Deke barricade themselves a room. Flint uses his Inhuman powers to block the entrance with boulders, but Maston-Dar uses a weapon to punch holes in the wall to breach the room. Deke comes up with a plan to use his anti-gravity device to create a gravity well that can send them several levels up to the Trawler. Sinara kills Maston-Dar just as he breaches the wall. Rather than continue the chase, Sinara returns to Kasius and Faulnak. She tells them "the Destroyer" escaped from them, and that Maston-Dar is dead at her hand. Faulnak, impressed by Sinara's ability as a warrior, wants her to replace Maston-Dar by his side, but Kasius stabs his brother through the back. Kasius reveals that he knew his father sent him on a suicide misson, and that Sinara killed the generals so they could escape. Now they plan to "avenge" Faulnak's death to restore Kasius' name within his family.

Mack and Yo-Yo stay behind with Flint while the rest of the team goes to the Earth's surface. Before they leave, Fitz tells them about the cache of S.H.I.E.L.D. weapons he stored on Level 3 the same level infested with Vrellnexians. Due to the Trawler's lack of landing gear and Coulson's inexperience as a pilot, the team prepares for a crash landing on the surface. Meanwhile, May wakes up on an old S.H.I.E.L.D. bunker with Enoch, and is greeted by a very old Robin Hinton. 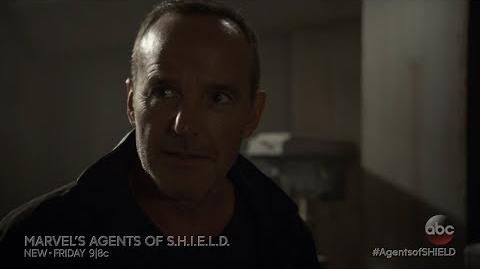