"All the Comforts of Home"
"Past Life" is the tenth episode of the fifth season of Agents of S.H.I.E.L.D..

The team has one final chance to return to the timeline, but their actions may have deadly consequences.

The Kree search the Zephyr when it arrives at the Lighthouse, but only finds Sinara's corpse. The S.H.I.E.L.D. team flew back to the Lighthouse from the plane's containment unit, while Enoch stayed behind contorting himself into a corner to hide from the Kree so he could activate the machine once Flint reassembles the Monolith. Coulson, May, Daisy and Deke split up from the rest of the team to rescue the Inhumans isolated from the rest of humanity. When Tess tells them there are other people Kasius revived who are still in danger, Yo-Yo offers to rescue them in her place so she can get the rest of humanity to safer levels of the Lighthouse on the Trawler. Kasius forces Tye to drink the odium, a serum that increases his strength and stamina for a short while before it causes his heart to burst, and sends them after S.H.I.E.L.D. however, Daisy kills him with a knife after a fight.

Yo-Yo finds the person Tess wanted to save is none other than Yo-Yo herself. After the Kree killed Yo-Yo in this timeline, they would routinely revive her corpse to take DNA samples from her to breed new Inhumans. Now, Kasius uses her as his "seer" to tell him S.H.I.E.L.D.'s plans. Future Yo-Yo tries to warn her past self about how they destroyed the world, and the more they fought to save the world, the more they brought about this apocalypse. Key to it all, she says, is a decision to save Coulson from dying. Meanwhile, Enoch contacts the team to tell them the Kree are closing in on him and he can't hold them off for much longer. Deke separates from the team so he can save Enoch from the Kree and buy the agents of S.H.I.E.L.D. enough time to get home, overruling Daisy's request to go with him. Daisy later tells Coulson she has no intention on going back to her own time so she could never cause this apocalypse, but Coulson ICE's her and takes her with them anyway.

Fitz sends Flint outside the Lighthouse for a spacewalk so he can gather the Earth's debris with his Inhuman powers. Flint hurls the debris through the window an observation room on Kasius' primary level of the Lighthouse where the Kree are preparing a counterattack against the humans. Flint flies back into the Lighthouse through the broken window before an automated system covers it airtight. Coulson, May, and the still unconscious Daisy rendezvous with the rest of the team here as Flint begins to rebuild the Monolith from the debris and the limestone walls of Kasius' quarters. Yo-Yo, however, is still missing, and Mack hurries off to to find her. He hears her voice coming from Kasius' arena, only to find Kasius holding a knife to the future Yo-Yo's throat. After taunting him, Kasius drinks the odium and slits this other Yo-Yo's throat. Kasius jumps down into the arena and fights Mack, the odium allowing Kasius to overpower him. Simmons sneaks up behind Kasius and plants an implant she took from one of his servants into his ear, causing him an immense amount of pain. While Kasius has his back turned to Mack as he tries to strangle Simmons, Mack turns around the bayonet on his shotgun axe and drives it through the Kasius' chest. Just as he begins to mourn Yo-Yo's death, he's reunited with the Yo-Yo from his timeline as she runs into the arena.

Even though Deke saved Enoch from the Kree, Enoch soon realizes the damage they did to the machine will make the Zephyr unable to power the machine alone. He suggests they use his own power supply instead, but doing so will cause him to expire. Once this happens, Enoch says his body will self-destruct in an explosion powerful enough to destroy several levels of the Lighthouse. Deke accepts his fate, and sends word back to Coulson warning him they'll only have one shot at this. Mack, Yo-Yo and Simmons hurry back to the Monolith as Enoch runs out of time and Deke activates the machine. The Monolith opens its portal as the Lighthouse is consumed in a blinding light from Enoch's destruction.

Later, Tess and Flint look out at the Earth from the Trawler. They mourn Deke's sacrifice, but that is offset by the second chance he and their S.H.I.E.L.D. friends gave them to start for humanity. Flint plans to rebuild the Earth, using Virgil's globe as his blueprint. 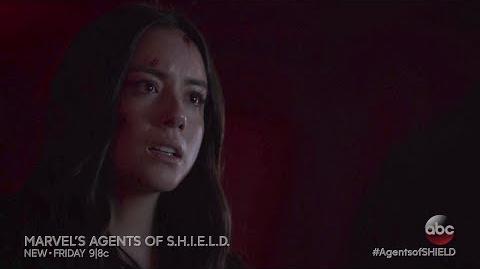