"All the Comforts of Home"

"The Real Deal"
"All the Comforts of Home" is the eleventh episode of the fifth season of Agents of S.H.I.E.L.D..

Coulson and the team set out to rewrite the course of humanity's fate; they're unaware that their efforts will dramatically change one S.H.I.E.L.D. agent's life.

General Hale, the military commander in charge of hunting down S.H.I.E.L.D. after the attempt on Talbot's life, talks to her teenage daughter, Ruby, about missing classes. Ruby, a huge fan of Daisy Johnson, asks her mother if she is a "good guy," because she's hunting the people who used to be "good guys".

The S.H.I.E.L.D. team arrive in the present, but still inside the Lighthouse. Fitz accidentally turns on a recording of General Rick Stoner designed to welcome people to the Lighthouse. The recording of Stoner explains S.H.I.E.L.d. built the Lighthouse in top secret as a doomsday bunker during the early 1970s, from which Coulson realizes the bunker must have been forgotten about when the Hydrogen Wave crisis of 1972 was averted. Fitz and May discover the white monolith and two others in the Lighthouse's storage room. They're then started by the sudden appearance of Noah, another sentient Chronicom like Enoch. Noah shows them the room where he monitors suspicious human activity when May sees on one of his monitors a light coming from the sky like Voss described. Daisy stays behind in the Lighthouse while the rest of the team leave for St. Louis to investigate the lights. The team leaves through a series of secret tunnels leading to the nearby town of River's End, and steal a VW car to get to the Zephyr, which Fitz and Hunter left in a nearby field. On the plane, FitzSimmons realize the light is actually coming from Earth, and the light's wavelength is the same as the beacon Hive used to bring the Kree to Earth.

Meanwhile, Deke, who was thought to have died when Enoch exploded, suddenly arrives in the present. Deke is in awe at even the most mundane parts of the present trees, food. He quickly walks over to a bar, gets drunk on Zima, and gets arrested when he can't pay for his tab. Daisy finds his mugshot after she sets up an alert should the police spot any of her friends. She borrows Noah's clothes and leaves to get him out of jail before he can tell the police anything about S.H.I.E.L.D., despite the risks. Daisy poses as a social worker assigned to Deke and tries to pass him off as mentally incompetent; however, one of the River's End police officers is suspicious about her.

The team arrives in St. Louis. They break into the building housing the beacon, and are surprised to find Agent Piper is already there. She explains that she recognized the beacon's light and went there ready to fight any Kree who responded to it. General Hale, meanwhile, gets word that S.H.I.E.L.D. has been spotted, and sends a team out to apprehend them. When her soldiers arrive, Piper turns her gun on Coulson, and reveals she made a deal with General Hale in exchange for her freedom and the team's safety. The beacon was a trap. When the masked woman leading General Hale's forces orders them to kill the S.H.I.E.L.D. agents, however, Piper realizes she's been tricked and offers to help them get out of there alive. Mack discovers General Hale's soldiers are robots, allowing the S.H.I.E.L.D. agents to stop holding back. During the fight, the masked woman cuts off Yo-Yo's arms in the same place where her counterpart in the future were missing her's. The team grabs her and hurries back to the Zephyr so Simmons can treat Yo-Yo's wounds.

General Hale is waiting for Ruby, the masked woman who led the attack against S.H.I.E.L.D. - when she returns to her room in the general's base. She criticizes her daughter's sloppy handling of the situation, but Ruby defends herself by saying she forced S.H.I.E.L.D.'s hand. She escalated the situation because Daisy wasn't there, a thinks that Daisy will come out of hiding if she keeps cutting off her friends' arms. At the Lighthouse, Daisy checks in on Fitz and Noah as they scan the beacon for signals. Noah discovers the beacon's internal circuitry is heating up. He throws Daisy and Fitz out of the room before jumping on top of the beacon as it explodes in a violent fireball.

Elsewhere, General Hale finds Carl Creel in Philadelphia as while he jogs. He tells her he won't be a hired gun for her like he was for Talbot. General Hale, however, says she doesn't want a hired gun, she's building a team. 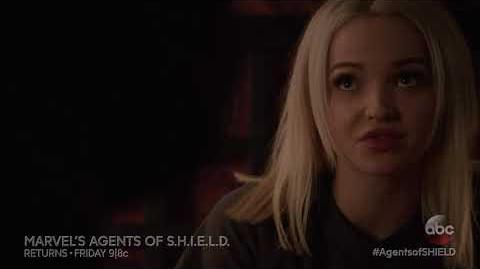 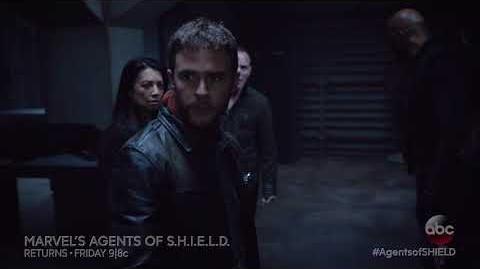