"Principia" is the thirteenth episode of the fifth season of Agents of S.H.I.E.L.D..

The team goes in search of Gravitonium in order to save the world.

Werner von Strucker is transferred to General Hale's safe house after he assaulted his psychiatrist. Werner has been cursed with a perfect memory since S.H.I.E.L.D. subjected him to the memory enhancer, often giving him violent episodes as he recalls the beatings he received from people like his father and Grant Ward. As he explores the seemingly-abandoned safe house, Werner comes across General Hale's daughter Ruby, who he recognizes from the time they spent together as kids. Werner takes Ruby hostage and demands to speak to her mother. General Hale threatens him with her mech soldiers, so he lets her go. Werner tells her he wants nothing to do with his father or Hydra, but General Hale assures him she has nothing to do with Hydra and only wants him to help her catch S.H.I.E.L.D.. Still, Werner refuses to help, and General Hale promises to set him free the next day. Later, Ruby tries to seduce Werner into staying by telling him the truth about what her mother wants what he knows of his father's work, and suggests the two of them could take over her team for themselves.

Meanwhile, S.H.I.E.L.D. is on the search for more gravitonium to keep the rift to the Fear Dimension closed. Daisy thinks they can find gravitonium and possibly prosthetic arms for Yo-Yo by tracking down a scientists who used to work for Cybertek. Cybertek, however has since been dissolved, and its former scientists are all dead. Daisy noticed each of the scientists had their death certificate signed by the same person, leading her to believe he's helping them go into hiding. Coulson, May, Daisy and Mack follow a lead to Baton Rouge to find him. To their surprise, their target is Tony Caine, Mack's roommate from when he was in S.H.I.E.L.D. Academy. After reminiscing about their time in the Academy, Tony tells S.H.I.E.L.D. he has been helping scientists coerced into working for Hydra get new lives and identities similar to Project Paperclip. Tony takes Mack to meet one of the Cybertek scientists. He says Cybertek's supply of gravitonium when the ship carrying it across the Pacific, the Principia, was lost in a storm.

Back at the Lighthouse, Fitz is getting frustrated with "babysitting" Deke, as Coulson left him behind to help Fitz because he has the most experience with gravitonium. The rift to the Fear Dimension starts to open again, prompting Fitz to warn everyone in the Lighthouse to be aware of anything that seems out of place. Deke is confronted by an apparition of his mother. She reminds him of a saying she used to tell him which her mother always said to her, and tries to warn him against getting too close to S.H.I.E.L.D.. The fear manifestation of Deke's mother is suddenly destroyed by one of a Kree Reaper. Simmons finds Deke just as he destroys the manifestation. While she tries to convince him to come back to control, Deke has a sudden realization that the gravitonium on the ship might have lifted it into the sky.

The Zephyr finds the Principia floating among the clouds. Daisy, Mack and Coulson boards the floating ship to find the gravitonium, however, all they find are the corpses of the ship's crew and the gravitonium case empty. Unknown to them, several of General Hale's sleeper mechs awaken because they've boarded the ship. Mack finds a softball-sized ball of gravitonium elsewhere on the ship. They can't touch or move the gravitonium without disrupting the gravity field keeping the ship in the air, but Deke tells them they can move it using a plastic box and still have 90 seconds to make it off the ship before it starts to fall. The mechs ambush them on their way out. Coulson and Daisy take the gravitonium back to the Zephyr while Mack stays behind to distract the mechs. He makes it back to the plane just in time, taking some disabled mechs with him.

Deke tells Simmons and Yo-Yo the team are back from their mission. Before this, he figures out Fitz and Simmons is his grandparents when he overhears Simmons tells Yo-Yo the same phrase his mother used to say to him. He doesn't tell anyone this, but that doesn't stop him from acting strange around FitzSimmons. Once they're reunited with the rest of the team, Mack gives Yo-Yo a gift, arms from General Hale's mechs. 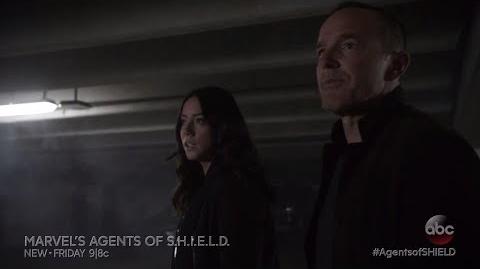 Retrieved from "https://marvel-movies.fandom.com/wiki/Agents_of_S.H.I.E.L.D._Episode_5.13:_Principia?oldid=215684"
Community content is available under CC-BY-SA unless otherwise noted.