Rise and Shine
"The Devil Complex" is the fourteenth episode of the fifth season of Agents of S.H.I.E.L.D..

Fitz and Simmons are faced with one of their greatest fears as they search for a way to seal the rift.

A Fear Dimension manifestation taking the form of a NASA astronaut that Simmons encountered on Maveth attacks FitzSimmons while Fitz works on the disabled mechs Mack brought back from the Principia, prompting the team to figure out a way to close the rift as soon as possible. Fitz, however, can't figure out a way to transfer the gravitonium into his device to seal the rift, a problem made worse as Fitz continues to show signs of intense stress and sleep deprivation. Meanwhile, another team led by Coulson and May trap General Hale by tricking her into driving onto the Zephyr. Deke is attacked by The Doctor, Fitz's alter-ego in the Framework, when he confuses him for Fitz when he tells him the news about General Hale.

General Hale tells Coulson very little about her motivations, and instead invites him to come with her so she can show him what she's fighting for, revealing she intentionally allowed herself to be captured. May, meanwhile, discovers General Hale's driver is not one of her mechs but Carl Creel. He threatens to destroy the Zephyr with a C4 belt unless S.H.I.E.L.D. listens to General Hale's demands. They have no other choice than to bring another of her associates onto the plane, none other than their old nemesis Anton Ivanov. Despite May's objections, Coulson agrees to go with General Hale in exchange for letting the rest of his people go unharmed.

At the Lighthouse, Daisy investigates a problem with cameras on a lower level, leaving Fitz alone in the control room. He's confronted by his villainous alter-ego, who accuses Fitz of being too weak to do what's necessary to get the job done. Meanwhile, one of General Hale's mechs reactivated by The Doctor tries to keep Simmons, Mack and Yo-Yo contained in the latter's room. Mack instinctively attacks, causing the mech to shoot him in the leg. Fitz hurries to investigate the gunshot. When they realize The Doctor is behind it, Fitz hurries to find Daisy before The Doctor could get to her and do to her what he would do to Inhumans in the Framework. He's too late, as Daisy is soon abducted by the other mech The Doctor reactivated.

The mech brings Daisy to another part of the Lighthouse where The Doctor set up an operating room. He cuts into back of Daisy's head in an attempt to remove the implant that inhibits her powers. Fitz finds them and pleads with The Doctor to stop what he's doing. Simmons gets worried about how long Fitz and Daisy have been gone, and heads out to find them. She finds Fitz talking to himself in The Doctor's tent. The Doctor wasn't one of the Fear Dimension anomalies, but a creation of his own psyche due to the stress of trying to keep the rift closed. The mech returns with Deke at gunpoint. While the mech holds Simmons and Deke hostage, "The Doctor" violently removes Daisy's implant. He has her use her powers to move the gravitonium into his device so he can seal the rift.

Later, Fitz is isolated from the rest of the team. Simmons tries to tell him The Doctor isn't him, but Fitz takes full responsibility for his actions. Even worse - he admits he still believes what The Doctor did to Daisy and Mack was the right thing to do. Deke finds Simmons in tears over how she is losing Fitz. He tries to console her, and in doing so reveals he is her and Fitz's grandson. She pukes soon after.

Meanwhile, General Hale reports to her superiors in person and apologizes for her recent failures. A mysterious figure hands her the Odium the same substance Kasius used to fight Mack and tells her to it as a last resort. Before he sends her off, he tells her, "Hail HYDRA." 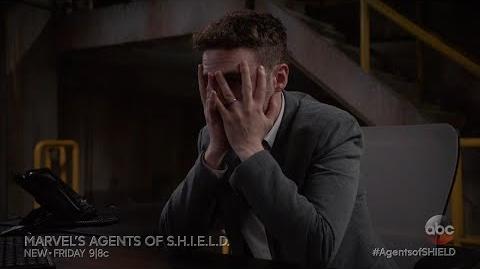 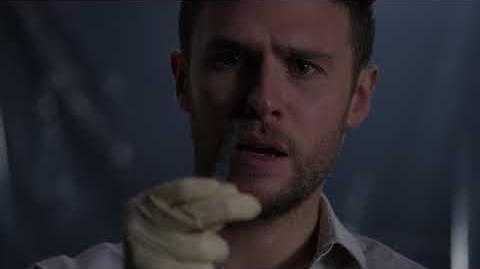 Retrieved from "https://marvel-movies.fandom.com/wiki/Agents_of_S.H.I.E.L.D._Episode_5.14:_The_Devil_Complex?oldid=209569"
Community content is available under CC-BY-SA unless otherwise noted.