"Inside Voices"
"Rise and Shine" is the fifteenth episode of the fifth season of Agents of S.H.I.E.L.D..

Coulson uncovers General Hale's true agenda; it could be the end of the world if S.H.I.E.L.D. doesn't help her.

General Hale, after revealing herself to be a member of HYDRA, tells Coulson her story.

28 years ago, a young Hale was a student at a Hydra academy with Jasper Sitwell and Wolfgang von Strucker. Guest speaker Daniel Whitehall gives her class a presentation about the attempt to create a super soldier with the Particle Infusion Chamber, an apparatus that forces living cells to take on the properties of other materials. Hale impresses Whitehall when she suggests the device could be used to empower HYDRA's soldiers with substances from outer space. As graduation rolls around, Hale compromises her placement within Hydra when she gets into a fight with Strucker. Whitehall hand-picks her for a special project to be artificially inseminated with someone optimized for the chamber, with the organization's future leader.

Two years ago, Hale's daughter Ruby is now approaching her own graduation from HYDRA's academy. General Hale is torn away from the academy for an emergency. At the Pentagon, her HYDRA superior informs her that Gideon Malick has been captured and is cooperating with S.H.I.E.L.D.. He also tells her that after the invasion of New York, HYDRA recovered a Chitauri device that brought them into contact with an alliance of alien races known as "the Confederacy" that warned them of a war coming to Earth. Before he can say any more, Hale's superior commits suicide before General Talbot can arrest him for his ties to Hydra. Hale returns to the academy to find her daughter fighting with her instructor so she doesn't have to kill her dog a routine part of joining Hydra. Hale kills the instructor, leaving herself and her daughter as the last two members of HYDRA.

Six months ago, Hale moves General Talbot to the academy while he's recovering from the attempt on his life by the LMD of Daisy Johnson. She shows Talbot the device that transports her to meet the Confederacy face-to-face. Talbot refuses to work with her after he deduces her allegiance with Hydra, so she has Ruby and the mechs take him away and torture him for information on the whereabouts of Hydra contraband he confiscated.

24 hours ago, Hale brings Coulson to the academy, and gives him the same lecture she gave Talbot. Coulson and Hale use the transporter to meet the Confederacy. Their shadowy representative gives Coulson a vision of an alien warship heading towards Earth. The Confederacy wants Hale to give them gravitonium and Inhumans in exchange for their help in fending off this threat. When they return to Earth, Coulson has misgivings about the Confederacy's true motives behind warning them about this impending attack. Hale shares this sentiment, and wants to work with S.H.I.E.L.D. to alter the deal in humanity's favor. Hale's plan is to use the Particle Infusion Chamber to infuse either Ruby or Daisy Johnson with gravitonium to transform them into humanity's greatest defender, or as Whitehall would call it, the "Destroyer of Worlds." Coulson realizes Hale infusing Daisy with the gravitonium is what leads to the Earth's destruction. He tries to tell her about what he saw in the future, but Hale thinks Coulson is trying to trick her and has her mechs take him away. Later, Ruby listens to Coulson's story, but is disappointed to learn it was Daisy, not her, who destroyed the world. When Coulson refuses to tell her where she can find Daisy, Ruby has the mechs bring Talbot, visibly broken after months of torture, to Coulson's room to convince him to talk. Talbot apologizes for telling Hydra everything he knows before the mechs drag him away.

Back at the the Lighthouse, Daisy and May think Fitz can tell them what HYDRA wants with Coulson. Daisy refuses to let Fitz out of his cell to look into what Hale's target could be, and even attacks him as he suggests what he did to her was right. Fully frustrated with Fitz, Daisy instead turns to Robin Hinton as another source of information. Meanwhile, Simmons and Mack successfully graft the robotic arms to Yo-Yo. Mack points out that Yo-Yo thinks she's invincible after seeing herself in the future, giving Simmons an idea for Fitz. She shows him proof that Deke is their grandson, and because he exists, she knows their bond is also invincible. 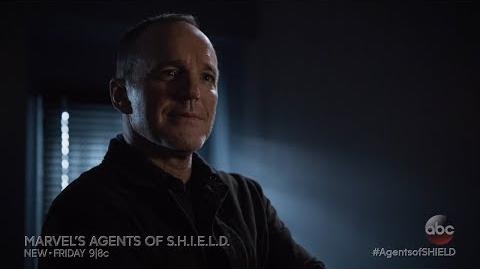 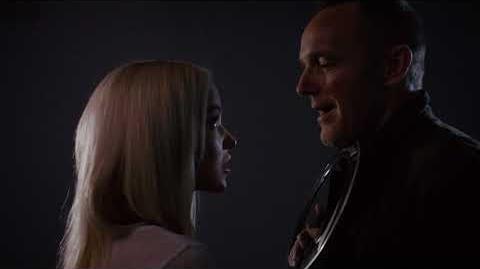 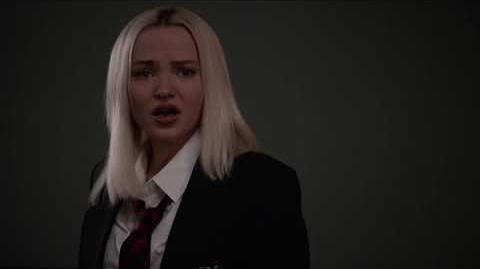 The Last Two Heads of Hydra – Marvel’s Agents of S.H.I.E.L.D.