"Inside Voices" is the sixteenth episode of the fifth season of Agents of S.H.I.E.L.D..

Coulson is forced to team up with surprising allies to save the world, while the S.H.I.E.L.D. team attempts to track down and rescue him.

General Hale lets Creel absorb gravitonium to see how his body reacts to it. When he comes into contact with it, however, Creel experiences violent visions of Dr. Hall's encounter with Coulson years earlier. The visions cause Creel to believe the gravitonium is alive.

Daisy, May and Deke leave the Lighthouse to find Robin so she can help them find Coulson. While they're away, Daisy puts Mack in charge of things at the Lighthouse, with strict orders to not let Fitz out of his holding cell for any reason. Simmons and Yo-Yo both want to let him out, as they think his knowledge of HYDRA's plans gives them the best chance of finding Coulson. Simmons tries to "prove" to Mack that Fitz can be trusted by showing him she cannot die and the future is safe. She does this by having Yo-Yo pouring three glasses of water and one with a deadly, identical-looking chemical, and then drinking three of them. If their future is already determined, then she will not drink the deadly chemical. Simmons collapses after drinking the third glass. Mack lets Fitz out of his cell to make her an antidote, but once he is out Yo-Yo traps Mack inside, revealing Simmons' "experiment" to be a ruse. The fourth glass did contain the other chemical, so Simmons' survival does seemingly prove her point about the future. This is further reinforced when Yo-Yo, still getting used to her new arms, accidentally fires off a shot between them.

Meanwhile, Daisy and her team recover Robin Hinton and her mother Polly from an isolated safe house. Once on the plane, Polly shares that her relationship with her daughter has only become more strained as Robin becomes further lost in her own visions. She also shows them one of Robin's most recent drawings, which Daisy recognizes as her death in the future but doesn't disclose this to Polly. Robin soon address May as her mother before beginning to draw Coulson and and another man by snowy mountains. Daisy lets the plane's computer find similar geographic features to lead them to where Coulson might be. Polly then talks with May, beginning to suspect that she herself is not in Robin's drawings because she dies in the future. Robin then calls Polly mom and asks her to sit beside her.

At General Hale's bunker, Creel still suffers from visions of Dr. Hall after coming into contact with the gravitonium. The visions lead him to break into Coulson's cell and assault him, apparently for allowing what happened to Dr. Hall. Coulson finds out Creel had no idea General Hale also had Talbot there as her prisoner. The two of them find Talbot and attempt to escape. They trigger an alarm, sending Hale's forces after them. Creel revives Coulson after he briefly dies during a fight with one of the mechs. Coulson and Talbot make their way to the alien teleporter while Creel holds off Ruby and the mechs. Coulson thinks they the machine can bring them somewhere on Earth as long as they use it correctly. The machine takes them to the middle of a snowy forest, with mountains behind them.

Four years ago, Raina and Ian Quinn make their escape with Garrett's supply of gravitonium. Quinn thanks her for getting the substance back for him. Raina corrects him, saying it's the gravitonium that wants him. She opens the container of gravitonium, and the substance consumes Quinn before going back in its container. 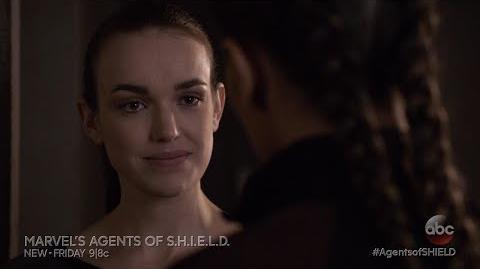 Retrieved from "https://marvel-movies.fandom.com/wiki/Agents_of_S.H.I.E.L.D._Episode_5.16:_Inside_Voices?oldid=209567"
Community content is available under CC-BY-SA unless otherwise noted.