"All Roads Lead..."
"The Honeymoon" is the seventeenth episode of the fifth season of Agents of S.H.I.E.L.D..

While an agent’s life hangs in the balance, Fitz, Simmons and Yo-Yo attempt to neutralize a weapon that could play a role in Earth’s destruction.

Coulson and Talbot are still lost in a frozen wilderness after escaping from General Hale. Ruby uses the teleporter to quickly catch up to them. The two are suddenly rescued by Daisy, who found them with Robin's help. She tells May and Deke to get Coulson and Talbot to the Zephyr while she takes care of Hydra. Ruby opens up about how she idolized Daisy, but ultimately her goal is to beat the legendary Quake in a fight. Deke, however, hung back, and helps Daisy throw off Ruby. Suddenly, Deke is shot several times by General Hale, who also used the teleporter to follow them. Daisy retreats back to the Zephyr to stabilize Deke, only for him to go into shock on the flight back to the Lighthouse.

Piper has already let Mack out of the holding cell by the time the rest of the team returns to the Lighthouse. While Piper and Mack perform emergency surgery on Deke, May confronts Coulson about his reckless decision to hand himself over to Hale. Daisy asks Talbot to tell them everything he told Hale about S.H.I.E.L.D. When Deke wakes up from his surgery, he still under the influence of the anesthesia shares a number of embarrassing thoughts, mostly about his crush on Daisy. Shortly after Mack and Piper put him back to sleep, Daisy tells them they're getting a ping from the mechs' transceiver.

FitzSimmons, and Yo-Yo go to England to find an abandoned HYDRA facility that might hold the key to saving Coulson. The facility is located inside an abandoned nuclear silo, worrying them about radiation contamination. However, Simmons spots healthy flowers nearby and Fitz uses a Geiger counter to confirm the lack of radiation they guess that Talbot fenced off the premises to keep out trespassers. Upon infiltrating the facility, they find Anton Ivanov and a number of General Hale's mechs guarding the abandoned laboratory. They sneak inside the lab after causing an explosion outside the facility to distract Ivanov and his mechs. Inside they find an incomplete Particle Infusion Chamber. While FitzSimmons attempt to disable the chamber, Yo-Yo tells them that her future counterpart warned her against trying to prevent Coulson's death.

Yo-Yo tries to stop the mechs when they come back, but her prosthetic arms overload because they aren't built to accommodate her Inhuman speed. FitzSimmons barricade themselves inside the lab to fight the mechs while Yo-Yo escapes to the quinjet. Yo-Yo, however, runs right into Ivanov. The two of them fight, ending with Yo-Yo tackling Ivanov through a window. Once Ivanov's body is disabled, the other mechs suddenly shut down.

Meanwhile, General Hale and Ruby argue over how they handled Coulson and Talbot's escape. General Hale locks her daughter inside her room as punishment. Werner von Strucker opens the door to her room, recalling the code to the keypad from his perfect memory. He shows her what he remembers about the Particle Infusion Chamber, and suggests the two of them should fulfill her destiny without her mother's help. Ruby lures General Hale inside her room, and after tricking her into letting her guard down Ruby locks her mother inside. Werner and Ruby use the teleporter to get to the Hydra facility in England. They hold FitzSimmons hostage, and force them to work on fixing the Particle Infusion Chamber.

Back at the Lighthouse, Daisy lets Talbot call his wife with a phone that will prevent HYDRA from finding them. However, General Hale's assistant is with Talbot's wife, and forces her to read the message that triggers Talbot's Faustus conditioning. 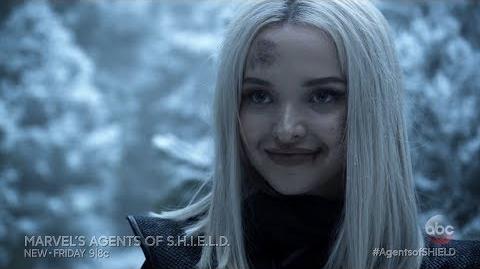