"The One Who Will Save Us All"
"Option Two" is the nintheenth episode of the fifth season of Agents of S.H.I.E.L.D..

Coulson and the team find themselves under siege at the Lighthouse.

Coulson updates his team on a plan to destroy the remaining gravitonium by launching it into the sun. During the briefing, tensions over Ruby's death at Yo-Yo's hands blow up between the agents. Before Daisy leaves to take Robin, Polly, and Creel into Tony Caine's protection, May informs her that Tony has information on the Deathlok program that could possibly save Coulson's life. Talbot, meanwhile, has Coulson come to his holding cell to talk to him. He wants to repent what he did to help Hydra, starting by warning Coulson that they compelled him to broadcast the location of the Lighthouse.

A giant alien spaceship suddenly appears over the Lighthouse, knocking out communications to the bunker and the nearby town. Coulson accidentally sends the Lighthouse into lockdown for a nuclear attack because he didn't listen to the options long enough to hear the "alien invasion" setting, sealing the bunker off to the outside world for potentially 15 years. Coulson expects Daisy will be able to get them out of this, but after finding out about her other mission he realizes they will be in this for the long haul. The Lighthouse receives a transmission from Qovas, General Hale's contact within the Confederacy, who demands S.H.I.E.L.D. hand over the gravitonium. When Coulson refuses to surrender the substance to him, Qovas prepares his soldiers to take it from him. While the team prepares to bunker down, Coulson suddenly realizes the lockdown won't keep the Confederacy out, but will only keep them in.

Qovas' soldiers teleport into the Lighthouse, quickly killing a few of S.H.I.E.L.D.'s agents. Deke recognizes the aliens as Remorath, a terrifying alien race of marauders that can see in pure darkness and ruthlessly dispatches their enemies with their claws. Coulson prepares his team to evacuate. FitzSimmons discover a manual override for the lockdown, but it is located on another level of the Lighthouse. Fitz and another agent leave Simmons behind to reach the override; however, they are attacked by the Remorath and Fitz is only saved by Deke's last-minute intervention. They quickly discover the aliens disabled the manual override, leaving them trapped inside the Lighthouse until Daisy returns. Fitz and Deke head to regroup with the rest of the team, meeting up with Mack halfway and fighting against the Remorath on their way back to the control room.

Meanwhile, Yo-Yo gets Talbot out of his holding cell in preparation for the evacuation. They evade the Remorath and meet up with Simmons, Davis and Piper, who are still pinned down in the Lighthouse's lab. Yo-Yo, Davis and Piper take positions outside the lab to defend the gravitonium from the Remorath, while Simmons and Talbot remain inside as a last line of defense. Talbot sees a chance to atone for causing this mess when he accidentally uncovers the Particle Infusion Chamber. After knocking out Simmons with an I.C.E.R., Talbot feeds the gravitonium into the chamber, and steps inside.

Coulson, May, Mack, Fitz and Deke prepare to take on the Remorath closing in on the control room. However, the Remorath have them surrounded before help can arrive, leaving them significantly outnumbered by Qovas' forces and without the firepower to fight them back. Just as things seem grim, the chamber infuses Talbot with 100% of the gravitonium. Talbot uses his incredible new powers to effortlessly crush the Remorath invaders. He takes Coulson, tears a hole through the roof of the Lighthouse, and levitates them both into the sky, inadvertently lifting the lockdown.

Daisy, meanwhile, gets the information from Tony that could save Coulson's life. He gives her the last remaining sample of the Centipede serum derived from the Deathlok program that prolonged John Garrett's life. However, Garrett's version of the serum contained a healing agent developed by the Nazis that is not present in the sample he can give her. Later, Daisy unearths her mother's Jiaying, corpse to find that healing agent. 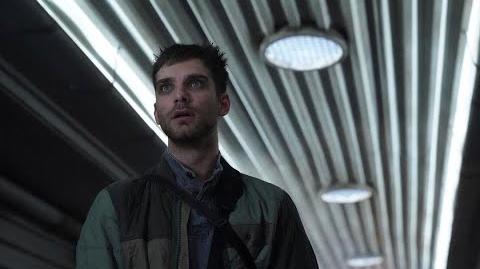