"The Force of Gravity"

"The One Who Will Save Us All"

"The End"
"The Force of Gravity" is the twenty-first episode of the fifth season of Agents of S.H.I.E.L.D..

Daisy's future as the destroyer of worlds could take a critical change.

Daisy, Coulson, and May are prisoners of the Confederacy. Coulson and May are kept in a holding cell on Qovas' ship while Daisy will be transferred to Taryan. Before she's handed over, however, the Remorath place a device on her head that will allow Taryan to "break" her to his will while she's unconscious. Taryan, through the device, at first tries to appeal to her identity as an Inhuman, as someone both admired by the Kree and better than normal humans, but she doesn't fall for his act. Taryan informs her that she is unconscious and will be handed over to her willingly or not when she tries and fails to blast him away with her powers.

Talbot boards the Zephyr with a pair of Remorath soldiers. They quickly kill Agent Kim while Deke and Davis hide. Talbot and the Remorath commandeer the quinjet attached to the Zephyr. Talbot detaches the quinjet from the plane and floats it back towards Earth. Once on the ground, Talbot finds Carl Creel in his hospital bed. He tricks Creel into believing he will cure him of the voices in his head, but he instead turns Creel into more gravitonium and absorbs him into his body to become more powerful. Mack and Yo-Yo helplessly watch this from the Lighthouse, and realize they need to stop Talbot before he can put anyone else in danger. They also talk about Creel, whom Mack had forgiven for the death of Isabelle Hartley after he was freed from Hydra's control. Meanwhile, Fitz thinks that future Yo-Yo wasn't warning them that the world ended because they only tried to save Coulson, but that they failed to do so. He thinks they can still save the world if they successfully reverse Coulson's condition.

Daisy, still unconscious, focuses her powers to break the device on her forehead. Freed from the device's control, Daisy frees herself from the Remorath carrying her away. Deke, meanwhile, sneaks onto the Remorath ship, and helps Coulson and May escape from the holding cell. They quickly run into Daisy fighting off even more Remorath. May "orders" Coulson and Daisy to head back to the Zephyr while she and Deke stay behind to redirect the missiles Qovas has aimed at the Lighthouse. Although Coulson doesn't like being ordered around, when they come under fire from the Remorath, Coulson throws up his holographic shield, pulls her closer to him, and they kiss. Daisy and Deke are both stunned by the sight of them together. The two teams break up once the Remorath are dealt with.

Talbot returns to his home so his wife Carla and son George can come with him. Both of them are surprised to see him after all he's been through. Talbot tries to impress George with his new abilities, but he loses his temper and pins Carla against the wall when she mentions S.H.I.E.L.D.. Talbot tells his frightened son that his mother is now against them. The family reunion is suddenly interrupted when S.H.I.E.L.D. SUVs arrive outside the house, Mack and Yo-Yo having realized Talbot would be going after his family. Talbot goes outside to confront them. He easily tosses the vans into the air, and when the agents open fire on him he collects their bullets in mid-air and hurls them back towards them. When George sees all this, Talbot tries to tell his son that S.H.I.E.L.D. are bad people, but George tells his father that he is the bad person. Yo-Yo tries to get George away from Talbot before he can hurt him, but finds Talbot put up an invisible field to prevent anyone from getting close to them. Devastated by what his son said to him, Talbot flies off, determined to prove to George that he is a hero.

Daisy and Coulson make it to the Zephyr and help Davis fight off more Remorath. During the fight, Coulson gets a bad cut on his hand. Meanwhile, Deke and May make it to the bridge of the Remorath ship. Deke helps May put in new coordinates for the missiles, but Qovas stops them before she can put coordinates for the Lighthouse into the teleporter. May fights Qovas while Deke puts in the remaining coordinates; Deke also pulls out a device from the navigation console, figuring it may be useful. Qovas, realizing he's losing the fight, fires the missiles at the Lighthouse. What he doesn't realize, however, is that they changed the missiles' target to the Remorath ship. May and Deke teleport back to the Lighthouse while the missiles turn back towards the ship and destroy it. From the Zephyr, Daisy and Coulson contact the Lighthouse to confirm May and Deke got back fine, and are also updated on the situation with Talbot. Daisy notices the wound on Coulson's hand is much worse than before, and he suddenly passes out and begins to cough up blood.

A med team picks up Coulson when the Zephyr returns to the Lighthouse. Simmons informs the rest of the team that Coulson's condition is worsening, but they think they can find a way to save him with the Centipede serum and the healing agent in Jiaying's DNA. They also think they found a way to stop Talbot, although they regret it is a lethal option. They want to use the Centipede device to inject Talbot with the Odium. However, Daisy tells them the Centipede device in their lab is the only remaining sample of the serum left in the world, meaning they can't use it on both Talbot and Coulson. Now the agents of S.H.I.E.L.D. are left with a choice save Coulson, or save the world?

Elsewhere, Talbot has Robin and Polly Hinton captive on his quinjet. He asks Robin if she has visions of him tearing something out of the ground and levitating it into the skies. When she tells him she has, he asks her where. 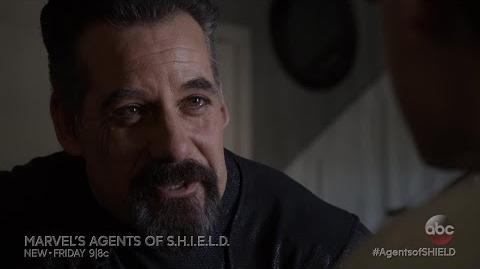