"Window of Opportunity"
"Missing Pieces" is the first episode of the sixth season of Agents of S.H.I.E.L.D..

Scattered across the galaxy, the team works to find their footing in the wake of losing Coulson. 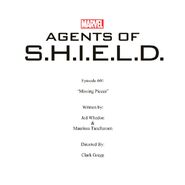