"I can bring order to the lives of seven billion people, by sacrificing twenty million. It's the next step, Nick. If you have the courage to take it."
―Alexander Pierce[src]

Alexander Pierce was the head of the World Security Council and a former leader within S.H.I.E.L.D. until it was revealed that he was the mastermind leading HYDRA from within the government organisation.

While serving as Secretary of Defense, Alexander Pierce was involved in a hostage situation in Bogota where he met S.H.I.E.L.D. agent Nick Fury, who successfully saved the hostages including Pierce's daughter. Pierce had hoped to win the situation through negotiation, but Fury disagreed. Disobeying direct orders, Fury ordered a military operation that rescued the hostages before they were to be killed. Impressed by Fury's actions, Pierce later made Fury the Director of S.H.I.E.L.D.

In 1989 he ordered the release of Werner Reinhardt, an old HYDRA General who was sentenced to life imprisonment by Peggy Carter in 1945. Reinhardt was released from the Rat prison and moved by HYDRA's moles in S.H.I.E.L.D. to his old fortress in Austria.

Secretary Alexander Pierce was meeting with the World Security Council via holograms at the Triskelion over the matter of the hijacking of the Lemurian Star. Fury interrupted and informed Pierce that they needed to delay Project Insight. Pierce approved, but on the condition that Fury have Iron Man stop by his niece's birthday.

Later, after an attack on Fury and his apparent death, Steve Rogers was brought in to speak with Pierce, who asked Steve why Fury was in his apartment, hoping to find clues to who killed him. They suspect Georges Batroc, leader of the hijacking, after he was found the previous night in a safe house. Pierce insinuated that Fury hired the pirates to infiltrate the ship so that he can acquire classified information, and was then killed after the deal went wrong. Steve denied this claim and only said that Fury told him not to trust anybody.

After Steve left, Pierce branded him a fugitive for withholding information on Fury's death. Pierce met with the World Security Council again, defending Fury as a martyr, though they believe he was killed for trying to cover up his own illegal dealings. They all opted to reactivate Project Insight.

Later, Pierce was in his home, just as the Winter Soldier appeared in his lounge. Pierce started to talk to him when his housekeeper, Renata came back to get her phone. Who Pierce then shot and killed because she had seen him and the Winter Soldier talking.

The next day, he arrived at a base hidden within a bank, where HYDRA agents work to fix up Bucky's metal arm after a fight with Steve. Pierce entered, praising his work and asking him to come back to do it again. Bucky asked about Steve, realizing he knows him. Pierce ordered the agents to get him back to his killing mindset.

The World Security Council arrived at the Triskelion for the launch of Project Insight, guided by Pierce. He gave each of them an electronic pin that would give them access to anywhere in the building.

After Steve accessed a mic that patched him through to every speaker and told the agents of S.H.I.E.L.D. that Pierce was a traitor who was working for HYDRA, and that they must stop Project Insight from happening. Pierce tried to persuade the World Security Council to join him in HYDRA's project, making it sound like a peaceful effort to subdue potential attacks around the world.

He handed Councilman Singh a glass of champagne, but Singh refused to join him and tossed the glass. Pierce pulled out a gun and aimed at Singh, but Councilwoman Hawley kicked Singh away, then took down the other HYDRA goons in the room before taking the gun. She removed her disguise to reveal herself as Black Widow. Her backup came when Fury stepped out of a helicopter, to Pierce's surprise.

Knowing Pierce would have deleted his retinal scan, Fury removed his eyepatch to reveal his scarred dead eye and used it override Project Insight along with Pierce, as they were the only two in the room capable of doing so. Pierce then activated the pins he gave the council members, causing them to burn deeply into their sternum. He threatened to activate Natasha's, forcing her to walk out with him. Natasha activated her own stingers, tasering herself but shorting out the pin. Fury then shot Pierce twice, killing him. Pierce died a traitor, his last words being "Hail HYDRA".

Steve Rogers encountered Pierce in the 2012 time heist when Pierce personally came to Stark Tower following the Battle of New York to make sure HYDRA secured the Chitauri Scepter.

Alexander Pierce was the Secretary of S.H.I.E.L.D, and also a councilman on the World Security Council. He was still frequently addressed as "Secretary Pierce", presumably out of respect for his former status as Secretary of Defense. He shares a friendship with Nick Fury, who he knew for years. However, in reality Pierce was HYDRA's top agent inside of S.H.I.E.L.D., he is shown to be a ruthless master strategist, swiftly eliminating anyone who dares to get in the way of HYRDA, while maintaining total secrecy.

Regarding his relationship with Bucky Barnes, Pierce was shown to be abusive and manipulative toward him. Furthermore, it is implied that he lied to him on numerous occasions, such as when Bucky inquired about Steve. He deployed him to assassinate Nick Fury, with apparent success. Following Fury's apparent demise, he then deployed Strike agents to capture Steve Rogers, who escaped them. He manipulates the World Security Council, to reactivate Project Insight, an operation involving three heavily armed Helicarriers linked to spy satellites, designed to preemptively eliminate threats to Earth. In truth, HYDRA actually desired to use them to target and kill approximately 20 million people selected by Arnim Zola's algorithm, any individual who was a possible threat to HYDRA. His plan is foiled by Fury, Steve, Natasha, the Falcon and S.H.I.E.L.D. agents loyal to them. 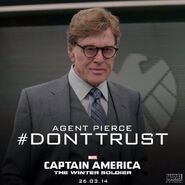 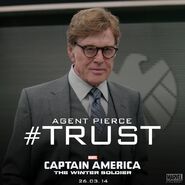 Retrieved from "https://marvel-movies.fandom.com/wiki/Alexander_Pierce?oldid=267370"
Community content is available under CC-BY-SA unless otherwise noted.