Kerry Washington
Alicia Masters is a blind woman and the girlfriend of Ben Grimm.

Alicia is a blind artist who meets Ben Grimm after he has become the Thing and his fiancée, Debbie, abandoned him for his appearance. Alicia falls in love with Ben and helps him to accepting Reed Richards' proposal to become superheroes, while searching for a cure to Ben's body.

Alicia is chosen by Sue Storm as her bridesmaid and she helps her to overcome her fear moments before her wedding with Reed. However, the ceremony is interrupted by the arrival of the Silver Surfer.

After the battle with Doctor Doom and Galactus, Reed and Sue are finally able to get married, and Alicia reprises her role as bridesmaid.

Alicia is a sweet and motherly woman, the girlfriend of Ben Grimm. She is a skilled sculptress and a known artist. 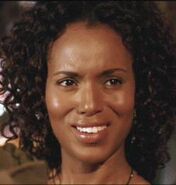