"I am afraid I have been stalling, Captain. Admit it, it's better this way. We are, both of us, out of time."
―Arnim Zola[src]

Arnim Zola was a Nazi scientist working for HYDRA. He helped Johann Schmidt harness the power of the Tesseract. Zola's experiments on it allowed its use as a power source to create all of his designs, weapons to vehicles and equipment for the war. When he was captured by the Howling Commandos, Zola reveal the location of Schmidt's base. After the war, Zola was recruited to work for S.H.I.E.L.D. as part of Project Paperclip. He created a new HYDRA that slowly takes over the organization. Soon after, Soviet HYDRA operatives found James Barnes, Zola experiments and brainwashed him for the "Winter Soldier" program. Later in life, Zola suffered a terminal illness, causing him to transfer his consciousness into a 1970's era supercomputer located in a secret S.H.I.E.L.D. facility at New Jersey. From there, Zola masterminded S.H.I.E.L.D.'s Project Insight.

Arnim Zola was the Germany's top scientist that worked briefly for the SA. Then he was recruited by the SS officer Johann Schmidt (AKA, The Red Skull), to work and design weapons for him. Then, when HYDRA was organized he became second in command and personal scientist of Johann Schmidt. After HYDRA forces found the Tesseract, Schmidt asked Zola if he could study its power, and accidentally he discovered how to transform its energy into advanced laser ammunitions and engines. He designed advanced weapons for HYDRA when they became separated from the Nazi-Germany. After the assumed death of Bucky; who had previously been tortured and subjected to unknown experiments under Zola's subjugation, Arnim was captured by Captain America and the Howling Commandos and interrogated by Col. Chester Phillips. He told them everything he knew about HYDRA and revealed that Schmidt's plans were of world domination.

Johann Fennhoff who has a special device that is keeping his mouth shut is placed in a prison cell where he meets his cellmate Zola. Zola mentions being a fan of Fennhoff's work while giving him a pencil and paper so they might collaborate, telling him the advantages of the American justice system.

Following the end of the war and the formation of S.H.I.E.L.D, Zola and several other former Nazi and HYDRA scientists were recruited by S.H.I.E.L.D. to combat super-powered threats through Operation: Paperclip. Unknown to everyone, HYDRA had survived the Red Skull's defeat and had changed their tactics. Rather than conquer the world through overwhelming military force, HYDRA would sow conflict across the globe through subversion and assassination, creating enough anarchy that when the time came the people of the world would gladly trade their freedom in exchange for the stability offered by HYDRA's totalitarian rule. To this end, HYDRA placed their own agents into key positions of S.H.I.E.L.D.; eventually gaining complete control over the very organization that had been established to oppose them; as well as assassinating any figure that posed a potential threat. One such person was Howard Stark, one of S.H.I.E.L.D.'s original founders and the father of Rogers' future ally Tony Stark aka-Iron Man. Zola also recovered the wounded Bucky Barnes, who had survived the fall from his train; equipping him with a cybernetic arm and reprogramming him to be HYDRA's elite assassin, the Winter Soldier.

Not long after being recruited by S.H.I.E.L.D., Zola discovered that he was dying from an incurable illness and transferred his mind onto a computer where he created a program that would be able to identify any potential threats to HYDRA's operations and mark them for termination. Zola's actions eventually caught the attention of Nick Fury who was immediately targeted and seemingly killed by the Winter Soldier. While investigating the circumstances of Fury's death, Rogers and Natasha Romanoff tracked the origins of a data file in Fury's possession to the military base Rogers trained at where they discovered the computerized Zola in a hidden bunker. After taking the time to reveal HYDRA's infiltration of S.H.I.E.L.D. and gloating that Rogers' sacrifice in stopping the Red Skull's bomber was ultimately meaningless, Zola revealed that he was stalling for time while a squad of S.H.I.E.L.D. Quinjets under HYDRA's control came within firing range. As Rogers and Natasha took shelter from the bombardment, Zola's final words were that it was for the best that he and Rogers die, as they were both, "out of time".

After traveling back in time to Camp Lehigh in 1970 to steal the Tesseract, Tony Stark encountered his father who was searching for Zola who was out of the room at the time. Unable to avoid Howard's notice, Tony told him that he had not seen Zola and lied about his identity.

Zola was recruited by Johann Schmidt because of his expertise in the fields of energy and applied mechanics. A scientific genius, Zola designed most of HYDRA's advanced weaponry, but his lack of morality led him to not really consider the goals his inventions would ultimately be used for. Seeing discovery as a goal unto itself, he was even willing to commit atrocities such as experimenting on prisoners of war.

A small, weak man, he was fascinated Abraham Erskine's Super Soldier research. Zola experimented on Bucky, when he was held captive with the 107th. Zola injects him with some form of the Super Soldier Serum. Zola personally oversees Bucky's transformation into the Winter Soldier.

Nonetheless, Zola was genuinely terrified by the Red Skull, once the warped extent of his global domination scheme become apparent. Zola hadn't really considered what Schmidt intended to do with all of the weapons he invented for him, and was stunned when Schmidt turned them on his former Nazi supporters. Even so, Zola continued to aid Schmidt out of fear, preferring to stay at his right hand rather than stand in his path and be crushed. Tellingly, after Zola's capture, Col. Phillips accurately guessed that he didn't wholeheartedly support Schmidt and would be willing to collaborate, given that all previous members of HYDRA had committed suicide (with cyanide pills implanted in their teeth) rather than face capture. However, when he was offered a position in the newly formed S.H.I.E.L.D., Zola used that opportunity to secretly rebuild HYDRA. 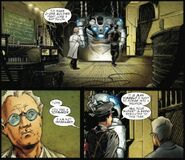 Zola in a destroyed HYDRA factory. 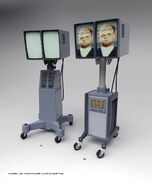 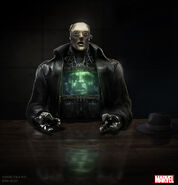 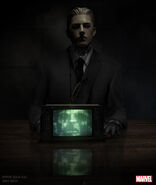 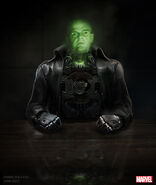 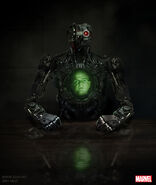 Retrieved from "https://marvel-movies.fandom.com/wiki/Arnim_Zola?oldid=272662"
Community content is available under CC-BY-SA unless otherwise noted.