The Avengers
Captain America: The Winter Soldier
Avengers: Age of Ultron
Doctor Strange
Spider-Man: Homecoming
Avengers: Endgame
Avengers Tower (formerly known as Stark Tower) is a high-rise building complex which is located in Manhattan, New York City, the complex was named after its owner Tony Stark who is the alter-ego of the superhero Iron Man. It is now the headquarters for the Avengers.

Stark Tower was constructed by Tony Stark to serve as the headquarters of Stark Industries. It is powered by its own independent arc reactor, capable of sustaining the tower for a year without any cost to the city, which results in Loki selecting the tower as the location where he will open the portal to draw his army to Earth, both for the practical reason of power and the symbolic meaning of it satisfying his own ego. The Stark Tower was almost destroyed by Loki and his Chitauri army, thus forcing Stark to rebuild it. The only remaining letter of the 'STARK' that previously adorned the side of the tower is A as a nod to the Avengers.

Pepper Potts announced in a press conference that, after all damage resulting from the Stark Expo incident had been repaired at the expense of Stark Industries, the relationship between Stark Industries and New York City would make another step towards the future. Pepper presented the plans for a structure acquired by Stark Industries, that would be transformed into the Stark Tower, the first completely clean energy powered skyscraper in Manhattan, hoping it would become a model for future development in the city.

Having been repaired and renamed to Avengers Tower, Stark Tower appears briefly during a targeting sequence.

After the Battle of New York, Tony Stark designed the building as the Avengers' main headquarters. The building can house the Iron Legion robots. With rising threat of HYDRA, the Avengers reassembled. After locating Loki's Scepter from HYDRA, Tony and Bruce Banner researched on the Scepter and decided to use its to finish a artificial intelligence for the Ultron program. Ultron wound up becoming evil upon inception, seemingly destroyed J.A.R.V.I.S. and taking over the Iron Legion to attack the Avengers. Tony would later use Avengers Tower's laboratory to reprogram an android built by Ultron, called Vision.

Avengers Tower can be seen when the buildings in New York are collapsing in on themselves.

Five years after the Decimation, the Avengers made a plan to go back in time and retrieve the Infinity Stones from various points in the timeline. Natasha Romanoff realized that three of the Stones are in New York in 2012, causing Bruce Banner, Tony Stark, Steve Rogers and Scott Lang to return to the Battle of New York.

While Banner went after the Time Stone at the Sanctum Sanctorum, Tony, Steve and Scott returned to the Tower where they witnessed the Chitauri Scepter being handed over to the Strike team lead by Brock Rumlow. Entering the elevator with them, Steve gained their trust by saying "Hail HYDRA" and retrieved the Scepter. In the lobby, Alexander Pierce tried to take custody of Loki and the Tesseract, but Scott caused a distraction by pulling a wire in 2012 Tony's Arc Reactor so that they could steal the Tesseract and the Space Stone with it. However, the Hulk from 2012, enraged at being forced to use the stairs, barged into the lobby, causing the Tesseract to skid to Loki's feet. Grabbing the Tesseract, Loki escaped, leaving the Avengers' mission a partial failure.

Pre-Avengers Tower after the Battle of New York.

Firing range, Helipad landing area, separate sleep quarters, and training facilities design for each member of The Avengers after the Battle of New York.

Concept art for the Stark Tower. 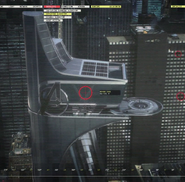 Avengers Tower, as featured in Captain America: The Winter Soldier.

Avengers Tower featured in the Motion Poster for Daredevil.

The Team Assembled in front of Avengers Tower.

The Team battle unit ready lauched from The Avengers Tower.

Avengers Tower featured in the poster for Jessica Jones. 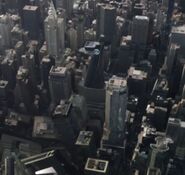 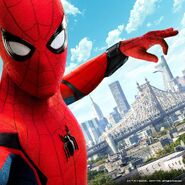 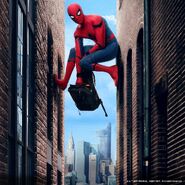