"Even now I can feel it, buried somewhere deep inside, watching me, waiting... But you know what scares me the most? When I can't fight it anymore, when it takes over, when I totally lose control... I like it."
―Bruce Banner[src]

Bruce Banner is a scientist who specialises in the field of gamma radiation.

Bruce is able to transform into the Hulk; whenever he is stressed, enraged or seriously injured; due to the fact that he was exposed to gamma radiation that activated his dominant genetic mutation gene.

Young Bruce is a withdrawn and closed child, rarely outwardly expressing emotion even in extreme cases, with patches of green skin that appear when he feels intense emotions. The elder Banner, under extreme guilt for his unintentional damage to his son, is feverishly attempting to find a cure for the child's condition when the government, represented by Thaddeus "Thunderbolt" Ross, shuts down his research after learning of his dangerous experiment. David Banner, in a fit of rage, causes a massive explosion of the facilities' gamma reactor. After the accidental death of his wife, David Banner is arrested and locked away in a mental hospital, while 4-year old Bruce is sent into foster care and adopted, taking on the last name of Krenzler and believing that both his biological parents to be deceased. During his life, the repressed memories of his parents, the explosion and his young life manifest themselves as intense nightmares that leave Bruce shaken and disturbed but unable to conjure the memories.

20 years later, Bruce Banner is a brilliant researcher at the Berkeley Nuclear Biotechnology Institute. He has a published molecular biophysics paper titled Molecular Self-Assembly in Configurable Potential Wells. Bruce uses nanomeds, activated by gamma radiation from a device called a Gammasphere (but actually operates differently to a genuine Gammasphere) to regenerate living tissue; the nanobot experiments result in out-of-control cellular growth and are invariably fatal to their test subjects. Presenting a fusion of gamma radiation, nanotechnology and congenital mutation as responsible for the transformations, the screenplay modernizes Hulk's origins somewhat. The military-industrial complex, represented by the unscrupulous major Talbot, becomes interested in the research to build self-healing soldiers. David Banner reappears and begins infiltrating his son's life, working as a janitor in the lab building. "Thunderbolt" Ross, now an army general, also begins to investigate when he learns of Bruce's involvement in the research through Talbot. Ross, the estranged father of Bruce's girlfriend and co-researcher Betty Ross, becomes concerned both for his daughter's safety around Banner, but also because Bruce is working in the same field as the father he does not remember.

As Bruce, Betty and their other co-scientist, Harper, continue to work towards progress in their experiments, they experience an accident during a routine power-up when there is an overload of the nanobots with Harper stuck in the lab room. Bruce saves Harper and takes the brunt of the gamma radiation himself. Afterwards, we see Bruce sitting in a hospital bed telling Betty that he's never felt better, which she can't fathom due to the fact that the nanomeds have killed everything else they've touched. The radiation has intertwined with Bruce's already-altered DNA.

That night, his father confronts him, revealing their relationship and hinting at the mutation in his son. Using Bruce's DNA, he begins experimentation on animals. Soon after, the building rage within him stemming from all of the stresses building up around him (his father, Betty, Talbot and the accident) activates his gamma-radiated DNA, triggering Bruce's signature transformation into the Hulk. His father sees him in his transformed state, and is in both awe and horror of what he has created, deepening his obsession.

After the destruction at the lab, Banner is found unconscious and at home by Betty. Bruce barely remembers his transformation, a sensation similar to birth. Ross arrives, suspicious, and places him under house arrest as well as taking over Bruce and Betty's lab. Betty confronts David Banner for answers, but only succeeds in angering him when she reveals her father's involvement. That night, David phones Bruce and tells him he has unleashed three mutant dogs to her house. Enraged and attacked by Talbot (who believes Bruce has deliberately cut him out of the loop by giving Ross control of the lab) Bruce transforms again and, after seriously injuring Talbot and his henchmen, manages to save Betty. The next morning, Bruce is tranquilized and taken to an enormous underground base in the desert. Betty convinces her father to allow her to attempt to help Bruce control his transformations, but Ross remains extremely skeptical, believing Bruce is "damned" to follow in his father's footsteps.

In the meantime, David Banner breaks into the lab and subjects himself to the nanomeds and the gammasphere, gaining the ability to meld with and absorb the properties of anything he can touch. Talbot, seeing an opportunity to profit from the Hulk's strength and regenerative capability, goes over Ross' head and takes over custody of Bruce, sending Betty away. When attacking and taunting Bruce fails, Talbot puts him in a sensory deprivation tank and induces a nightmare that triggers his repressed memories. David Banner confronts Betty and offers to turn himself in. In exchange, he asks to speak to Bruce "one last time". He also recounts to Betty his experience with his young son, revealing that he intended to kill Bruce after General Ross threw him off the project, believing his son's mutation would grow out of control. However, he accidentally killed his wife instead when she tried to defend her child.

Remembering the entire event, Bruce finally transforms; killing Talbot (who fires an explosive missile at the Hulk that ricochets off of his tough skin and backfires towards him) and escaping the base in the process. He battles the army in the desert, defeating 4 tanks and two Comanche Helicopters, and leaps all the way to San Francisco to find Betty again. Betty contacts her father and convinces him to take her to meet the Hulk, believing that he needs "a chance to calm down". Bruce's love for her comes through, and he transforms back into his human state.

At night, David is taken to a base to talk to Bruce. As a precaution, Ross has placed Banner between two large electrical generators which will kill them both with a massive electrical surge when activated. David, having descended into megalomania, rants of how the military and their weapons have ruined their lives, and dismisses Bruce as a pathetic shell of his "true son", with whom he can destroy the military. He bites into a wire, and absorbs the electricity to become a powerful electrical being, and Bruce transforms to battle him. The two fight in the sky before landing near a lake, where David takes on properties of rocks and water. He tries to absorb his son's power, but is unable to contain the grief and pain that is its driving force, and swells to an energy bubble. Ross orders a weapon (a Gamma Charge Bomb) be fired into the lake, and David's swelled form is destroyed, leaving no trace of either man.

A year later, Ross talks to Betty on the phone. Bruce is presumed dead, but there have been sightings of the Hulk in various locations, and Betty is under 24 hour surveillance. Deep in the Amazon Rainforest, Bruce is a doctor whose medical camp comes under siege by guerrillas. When they raid his camp, he tells them in Spanish, "You're making me angry, You wouldn't like me when I'm angry". His eyes become green and the camera pans back to show the rainforest, just as it fades to green and a roar is heard.

Hulk is constantly enraged and draws his strength from this rage. The angrier Hulk is the more powerful he becomes. This aspect of his physiology grants him virtually limitless strength. If Hulk calms down to a certain point, he will revert back to the form of Bruce Banner. 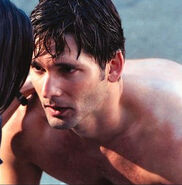 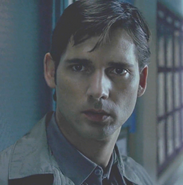 Bruce gets angry to become Hulk.

Bruce with his estranged father. 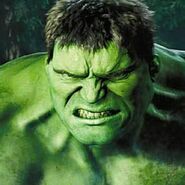 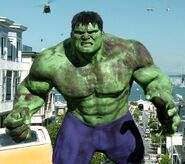 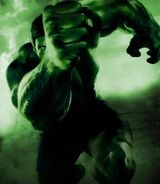 With Yoda in a poster for Industrial Light and Magic.