Brunnhilde, known mainly as Valkyrie, is an Asgardian warrior who was a member of Valkyries turned bounty hunter of Sakaar.

Long ago, Hela tried to break out of her prison and the Valkyrie were sent out to push her back, including Brunnhilde. The mission was a disaster, as Hela slaughtered the entire group. Brunnhilde only survived as another Valkyrie had jumped in front of a knife meant for her. After this, she abandoned Asgard and eventually made her way to Sakaar and became a bounty hunter, gathering fighters for the Grandmaster's arena fights.

One day, Thor had landed onto the planet and she captured him and sent him to Grandmaster and Topaz to be submitted into the arena. Thor decides to fight the best fighter and prepares. Before the match, he recognizes her as a Valkyrie and explains to her that Hela had returned and Odin is dead and that he needs her help. She refuses and leaves after shocking him with a device. She flies above the arena and watchas as Thor fights Sakaar's best fighter; Hulk. Thor nearly wins but is defeated when Grandmaster shocks him unconscious.

While visiting Hulk, Thor tries to convince her to join him in saving Asgard, but she again refuses. However, Thor was able to disarm his electronic device keeping him from escaping and he flees, with Hulk following. She is then summoned to the Grandmaster with Loki and is ordered to get Hulk and Thor back. Loki and her fight, during which Loki brings back her memories as a Valkyrie. She knocks him out and ties him up. She finds Thor with Bruce Banner and decides to join them in saving Asgard, forming the Revengers. She gave Korg and the other gladiators and "prisoners with jobs" weapons to start a revolution. She then escapes with Thor and Bruce on the Commodore through the Devil's anus after an aerial fight that resulted in Topaz's death.

She arrived at Asgard and helped Thor prepare for battle. He gave her a new uniform, which she put on and prepared for battle. Heimdall lead Asgard's civilians on the rainbow bridge, but they were blocked off by Hela's forces, including a Fenris Wolf. She tried shooting the beast but it wouldn't die, so Bruce jumped off the ship and became the Hulk, revealing that he was both of them, and battled the beast. Her ship was then attacked and crashed on the bridge. She joined Thor and Loki, who arrived on the Statesman with Korg and the gladiators. She and Thor fought Hela until they were defeated and gave up, only to reveal Surtur destroying Asgard and Hela while she and Thor went with Asgard on the Statesman. She and everyone else come to honor and put Thor on a makeshift throne, where he decides to move to Earth. During the travels however, Thanos' ship comes in front of theirs.

Valkyrie did not appear. However, the Statesman was destroyed, along with the deaths of half of the Asgardians, including Loki and Heimdall. She and the other half of Asgard escaped on escape pods, only for even more of them to be snapped away by Thanos.

After the attack on the Statesman and the Decimation, Valkyrie was able to lead to remaining Asgardians to Earth and back to their king, Thor. Over the years, Thor became depressed and began to eat and drink his pain away for failing to save the universe. Rarely coming down to see his people. When Rocket and Hulk came to pick up Thor, she advised them that he wouldn't see them. According to her he only came down once a month for "supplies".

Later, when the snap is undone, Dr. Strange opened a portal where she led what was left of Asgard's forces against Thanos and his forces alongside the Avengers, Guardians of the Galaxy, the Wakandians and Ravagers. During the battle, she provided reconnaissance, being able to locate Scott's van. She later assisted Captain Marvel in getting the Infinity Gauntlet to the van, slicing at the Leviathans with the help of Scarlet Witch. After the battle, Thor decided to leave with the Guardians of the Galaxy and he appointed her queen of Asgard for her natural leadership abilities. 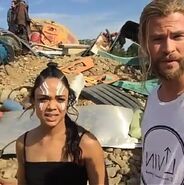 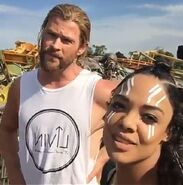 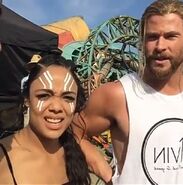 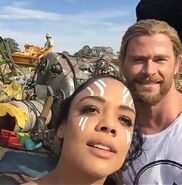