Marvel Movies
Register
Don't have an account?
Sign In
Advertisement
in: Agents of S.H.I.E.L.D. characters, Doctors, Villains,
and 3 more

Dr. Calvin L. Johnson is the father of Daisy Johnson who has been seeking his daughter for some time.

When Raina was talking to Ward as she left the Bus, she mused that he and Skye could be monsters together. Sometime later, Raina approached an unknown, bloodied figure and told him that she had found his daughter, showing him a picture of Skye.

When Raina made off with the Obelisk she took it to Skye's Father. He told her to pick it up to see if she was worthy of doing so. Once she picked it up, it started to glow orange.

Skye's Father was operating on a criminal when Raina came in to talk to him about the Obelisk. Fearing for her life, Raina pleaded with him to give up the Obelisk. When he noticed that she was frightened, he asked her who had made her that scared. She declared it was Whitehall. After telling him who, Skye's Father proceeded to choke Raina and began to lash out on her about not bringing him his daughter. She said she had but, he retorted that she only brought him a picture of her and proceeded to grip her neck tighter, proclaiming that he picked her up off the streets. Letting go of her neck, he stated that Whitehall had grown soft in his old age and told her to ask him for mercy. As Raina left, she declared that she wanted to bring him Skye, to which he replied "That's not her name".

Raina met with Coulson, and tried to make a deal with him to give up Skye in exchange for a picture of Agent Simmons that would be sent to every HYDRA employee's email, exposing her. Coulson refused, with Raina stating that Skye's Father loved her very much and had been searching for her for a long time. After their exchange, Skye went searching for her Father and found a picture of him with her as a baby. Watching from an iPad, Skye's Father saw Skye crying as Coulson comforted her. Walking into his operating room, Skye saw two bodies with their throats cut. She proceeded to call him a monster, as she does, Skye's Father became distraught and smashed the screen then drove away.

Sometime later, he entered the facility that Whitehall owned as they were packing up to move to a new location. He took down two of Whitehall's guards with a knife and the case that was housing the Obelisk. Talking with Whitehall, he stated that he heard that Whitehall had been looking for it. Once he showed Whitehall the Obelisk, he told him that in its native tongue it was called "The Diviner" and told him that he can teach Whitehall how to survive it. Skye's Father claimed that they had a common enemy in Phil Coulson, stating that they should work together to "kill him, along with everyone else".

Skye's Father was escorted by two guards to see Daniel Whitehall. He claimed that he could have saved them weeks of work on the Obelisk if they didn't have him locked up. He told Whitehall that he was thinking small about trying to weaponize the device and that the Obelisk was actually a key, telling Whitehall that it kills only to protect itself form those it doesn't divine as 'Worthy of unlocking it's true power'.

Whitehall told him about a story of "Blue Angels" who came to Earth looking to conquer and save mankind. Skye's Father explained that they had messed up the translation and that they actually came to "end mankind", using the Obelisk as a way to spare a chosen few. He said that the Obelisk decided who lived, who died and who inherited the earth. He told Whitehall that someone who was worthy of touching the Obelisk would be able to enter "the Temple inside".

Whitehall asked Skye's Father how he intended to find the city, with him explaining that he'd have to look "really really hard". Whitehall refused to give him men and money to find the city. Skye's Father wasn't interested in power and said he'd leave it to Whitehall. Whitehall asked him what he had to gain, and he stated that he would finally be reunited with his family in the after life.

When Coulson, Fitz and Triplett entered the facility at Laura Creek, Australia they were ambushed by HYDRA agents. Triplett was shot, and Skye's Father came out from where Coulson had put the hostages and told them that he was a doctor. He fixed up Triplett's wound, calling Coulson by his first name. Skye's Father stated that he was using this opportunity to get out of his situation with HYDRA. Coulson told him it wasn't the first impression he'd want with his daughter. Skye's father was relieved that Skye wasn't there. Skye's father told Coulson and Fitz how to save Triplett's life so that he had a chance to escape.

Returning from the facility, Skye's Father met with Daniel Whitehall and Grant Ward. Whitehall explained to him that Ward was an expert on S.H.I.E.L.D., with Ward telling the both of them that he had spent months with the team and Skye's Father asked him if he knew the entire team. Ward told him that they were like "family". He told Ward that it was always good to look your enemy right in the eye, while looking at Daniel Whitehall.

Twenty-five years earlier, Skye's Father was searching for his wife, seeing her in a ditch dead and cut up, he vowed to do to Whitehall what he did to his wife, saying that he'll tear him apart.

Ward brought Skye to HYDRA's base in Puerto Rico to meet her father. The Doctor introduces himself to his daughter as Cal. Skye at first wants nothing to do with him because he kills people and works for HYDRA, but Cal says he was only working with HYDRA because they had the means to reunite the two of them. When she tries to leave, Cal tells her she is exactly where she needs to be to transform and fulfill her destiny. Skye then asks about what happened to her mother, and Cal tells her the story of how Daniel Whitehall had her butchered and he promise to kill Whitehall.

He and Ward meet with Raina in the chamber where Whitehall and Agent 33 enter and congratulates them all on their success, and then asks Ward why he brought Skye back with him. He then has Skye escorted into the room by heavily-armed HYDRA guards, and he forces her to pick up the Obelisk. She grabs it and it starts to active, she then attacked one of the Hydra guards with it. She, her father, and Ward point their guns at the HYDRA agents, but they are outnumbered. Whitehall has Ward and Skye tied up and has the device used to subdue Raina put on Cal's neck that he can use to paralyze him.

Lather, Coulson, May, Hunter and Bobbi have barged into HYDRA's location Cal uses the distraction to kill the guards. Ward wants him to untie him, but Cal leaves both Ward and his daughter behind because he needs to do this alone and doesn't want Skye to see what he does to Whitehall. He eventually finds Whitehall in the commotion, and just as Whitehall points a gun at him he is shot from behind by Coulson, killing him. Cal is furious Coulson would take his revenge from him and starts attacking him.

Ward has gotten out of his ties and begins cutting Skye out of hers. Skye finds her father viciously beating Coulson and asks him to stop. When he doesn't Skye pointed her gun at him and threatens to shoot. He gets off of Coulson and promises to leave, and says goodbye to her and called her by her real name "Daisy."

Raina tracked down Cal after her transformation. He was about to leave Rico. She demanded he help her reverse her transformation. She felt particularly betrayed since she had wanted to undergo this transformation all her life, while Skye hadn't sought to change, and yet Skye was as beautiful as she had ever been. He however was ecstatic that his daughter had undergone Terrigenesis, and he couldn't care less about Raina. When Raina announced that she didn't want to live like this any more, Cal callously told her not to.

Cal tracked down and recruited Karla Faye Gideon, Wendell Levi, Francis Noche, and David A. Angar and took them to Coulson's home in Wisconsin, where they rendered an entire field of teenagers catatonic, to draw out Coulson and make an example of S.H.I.E.L.D. by portraying them as a barbaric organization keeping the "gifted" suppressed. Just when Coulson surrendered himself, Agent May turned up with a gun pointed to Skye's head, demanding Cal stand down. Then, suddenly, an Inhuman named Gordon teleported on the field and abducted Cal. In an unknown location, Cal let out a tantrum that Skye was not taken too. Gordon reminded him that he was an not an Inhuman and his fate would be decided by his superiors.

Skye's Father and Raina with the Obelisk 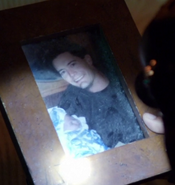 Skye as a baby with her father