Captain America is the title of a film based on the Marvel Comics character of the same name intended to be released theatrically in 1990 but instead released as a direct-to-video movie in 1992.

The time is 1936 in Fascist-controlled Italy, where the government kidnaps a musical boy prodigy and murders his family. The boy is to be used as a test subject for an axis super-soldier; however the project developer, Dr. Vaselli (Carla Cassola) objects to using the boy, and under the cover of gunfire defects to the United States of America to help create an American super soldier.

Seven years later, Steve Rogers, a loyal all-American that is excluded from the draft because of his polio volunteers for the experimental American supersoldier program. The formula not only cures Rogers of polio, but gives him enhanced strength and stamina. Before any more super soldiers, Dr. Vaselli is murdered by a Nazi spy and the secret of the formula dies with her. Code-named Captain America and given a red, white, and blue costume and experimental shield all designed by the murdered Dr. Vaselli, Rogers goes on his first mission. He is dropped outside of a secret Nazi compound whhich is building missile to aim at the White House. Captain America charges in, but is soon captured by The Red Skull. The Skull is revealed to be the young Italian boy who is now grown and whose face had been horribly disfigured by the experimental super soldier project.

The defeated Captain America is chained to the missile as it is being prepared to launch, however Cap is able to grab a hold of the Red Skull, forcing him to sever his hand in order to avoid being destroyed along with Captain America. While the missile is flight Cap manages to destroy the guidance control and it narrowly misses the White House. As it flies overhead a young boy named Thomas Kimball takes a grainy photograph of Cap on the missile. The missile continues to fly on until it crashes in Alaska, where Cap is frozen and placed in suspended animation until 1993.

Thomas Kimball goes on to become a Vietnam War hero and enters the realm of politics and is elected to the office of the President of the United States of America. In 1993, a year into his term, he is pushing for pro-environmentalist legislation that is angering the military-industrial complex who hold a secret conference in Italy that is led by the Red Skull.

After the War, the Red Skull had drastic plastic surgery done in a partially successful attempt to hide his red stained skin and his horrible scars. He raised a daughter and became the leader of a powerful crime family. In the 1960s, he became in a secret American military cabal and was behind the murder of various Americans who were against their militarism and Red Skull's fascism, such as Dr. Martin Luther King, President John F. Kennedy and Robert Kennedy. Now, Red Skull is targeting President Kimball for assassination.

Cap's frozen body is found in the Alaska by researchers who thaw him out. He awakens thinking that it is still the 1940s. After battling some of the Red Skull's thugs, he brushes off Sam Kolawetz (Ned Beatty), a reporter and childhood friend of President Kimball, and hitchhikes his way back to his wartime girlfriend, Bernice (Kim Gillingham), in California.

While Bernice still lives at her old address, her life has continued. She married and raised her own daughter, Sharon, who subsequently gives Rogers a series of history tapes in order to catch up on what has happen while he was in suspended animation. Meanwhile, the Red Skull's thugs, lead by his daughter, break into Bernice's house searching for Cap and kill Bernice. They also cause her husband to have a heart attack during their efforts to find where Cap is hiding out. Rogers and Sharon visit the secret underground base where Rogers underwent the supersoldier procedure in the hopes that Dr. Vaselli's diary is still there and the real identity of the Skull can be uncovered.

Cap and Sharon find the diary and the Red Skull's henchmen attempt to grab it. Rogers and Sharon vow revenge as well as the rescue of the recently kidnapped president. They travel to Italy and locate the Red Skull's home and an old recording of the murder of his parents. Sharon agrees to be kidnapped in order to allow Steve Rogers, who once again dons his costume, to enter the Red Skull's castle.

Cap storms the castle and frees the President, who reveals that Captain America was the inspiration for his life. The President picks up a machine gun and joins Cap in battle against the Skull's henchmen. In the midst of their battle, the Red Skull pulls out a remote trigger for an explosive device, but Captain America knocks him off a cliff with his trademark shield before the bomb can be set off.

The United States Marines show up to save the President and arrest the Americans involved in the kidnapping. 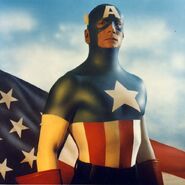 Wardrobe test
Add a photo to this gallery

Retrieved from "https://marvel-movies.fandom.com/wiki/Captain_America_(1990)?oldid=262660"
Community content is available under CC-BY-SA unless otherwise noted.