watch 01:29
Wiki Targeted (Entertainment)
Do you like this video?
Play Sound

In a rare plot element for Republic, the secret identity of the villain is known to the audience from the beginning, if not to the characters in the serial. The studio's usual approach was the use of a mystery villain who was only unmasked as one of the other supporting characters in the final chapter.

A rash of suspicious suicides among scientists and businessmen, all found holding a small scarab, gets the attention of Mayor Randolph. He demands that Police Commissioner Dryden and District Attorney Grant Gardner get to the bottom of the case, while openly wishing that Captain America, a masked man who has helped defeat crime in the past, were around to solve the mystery.

All of the suicides were members of an expedition to some Mayan ruins. One of the few remaining survivors, Professor Lyman, turns to his friend Dr Maldor for support. Dr Maldor, however, reveals that he is the man responsible for the deaths. He wants revenge because he planned and organised the expedition but everyone else claimed the fame and fortune. However, Lyman has developed the "Dynamic Vibrator" - a device intended for mining operations but one that can be amplified into a devastating weapon. Using his "Purple Death", a hypnotic chemical responsible for the suicides, Dr Maldor forces Lyman to disclose the location of his plans.

Captain America intervenes as the Scarab's heavies attempt to steal the plans and this leads to a sequence of plots by the Scarab to acquire a working version, as well as other devices, while trying to eliminate the interfering Captain before he succeeds in discovering Dr Maldor's true identity or defeats him. 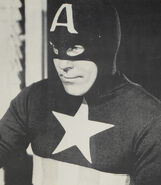 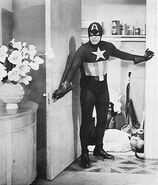 Retrieved from "https://marvel-movies.fandom.com/wiki/Captain_America_(serial)?oldid=275191"
Community content is available under CC-BY-SA unless otherwise noted.