"General Patton has said that wars are fought with weapons but are won by men, we are going to win this war because we have the best...men. And because they are going to get better... much better."
―Chester Phillips [src]

Chester Phillips was a colonel of the U.S. Army who recruited Steve Rogers to join Operation: Rebirth.

When Howard Stark began a demonstration which would showcase Vibranium, a metal discovered by Stark Industries researchers in Africa, Phillips approached Stark to talk to him, after both were attacked by HYDRA assassins, Stark agreed to join Col. Phillip's newly created Strategic Scientific Reserve, Later, he welcomed Abraham Erskine as he too was recruited into the S.S.R.

Colonel Chester Phillips is the officer in comand in the secret project in the Strategic Scientific Reserve aimed to create a series of super soldiers for the US Army. He's the chief of the training camp in which the candidates are given the opportunity to prove their value, and he's, from the very beginning, contrary to Abraham Erskine's choice, the skinny Steve Rogers. During the training, anyway, he's convinced to give a chance to the boy because of an act of pure bravery of his.

When, immediately after the experiment is completed successfully, Erskine is killed by a HYDRA agent, Phillips decides to leave the untrained Rogers behind and to continue the war the old fashion way. When a huge platoon of men is saved by Rogers alone, anyway, Phillips accepts to have him between his ranks, and entrusts him with a special elite commando.

After Arnim Zola is captured, Phillips successfully interrogates him and locates Johann Schmidt's last secret base. While Captain America distracts the enemy, Phillips himself leads the assault to the base, defeating a large number of HYDRA agents. Eventually, he helps Rogers reaching the Red Skull's experimental plane riding Schmidt's special car, ending on the edge of a ravine and seeing the plane flying away with Cap and the Skull aboard.

His current fate is unknown, though is arguable that he died of old age in the seventy years before Cap's awakening.

Colonel Phillips is shown to be one of S.H.I.E.L.D's. founders, along with Howard Stark and Peggy Carter.

Chester Phillips was an old fashioned soldier, a gruff and iron-forged man who firmly believes in the classical war values of strength over character. He's contrary to Abraham Erskine's choice for his Super Soldier Serum test subject, since he's used to training "real" combatants, and cannot see the value of a small and skinny man such as Steve Rogers. Even after Steve is turned into Captain America, Phillips regards him with cynical disdain, viewing him as an over-idealistic fool and a joke. However, after Steve infiltrates a HYDRA base by himself and manages to free the prisoners held within, Phillips retracts his opinion and convinces his superiors to transfer Steve to the front lines.

Phillips was a good strategist and a trained soldier, and, despite his rank, he still takes part in on-field missions, using canonical firearms. 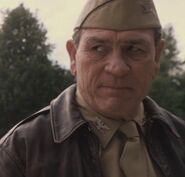 Add a photo to this gallery
Retrieved from "https://marvel-movies.fandom.com/wiki/Chester_Phillips?oldid=263598"
Community content is available under CC-BY-SA unless otherwise noted.