Gina Carano
Christina, also known as Angel Dust, is a mutate who possesses superhuman strength, durability, speed and stamina. She is also a member of the Workshop, the henchwoman of Ajax and an enemy of Deadpool.

Christina was a victim/test subject of the Workshop, a brutal mutant experimentation program derived from Weapon X. The torturous process to force evolution awakened her dormant mutant genes, granting her super strength and partial invulnerability. Eventually, working together with a fellow mutant subject, Francis Freeman, they overthrew the management of the Workshop and took it over themselves, taking the codenames Ajax and Angel Dust respectively.

When Wade Wilson reluctantly indoctrinated himself into the Workshop, Angel Dust and Ajax oversee his brutal treatment. Christina was particularly very annoyed with Wade's sarcasm and eccentricities, thus handled him rather violently in the various torture procedures. Ajax resorted to locking Wilson in a depressurization tank, the asphyxiation of which finally enacted his mutation, a powerful healing factor, but due to his cancerous cells, horribly disfigured him. Deciding to keep him in overnight out of spite, to which Wade headbutted Christina after she insults him, saying he "smelled like shit", although Francis allowed this, telling her he owed them some retribution. However, after they left, having actually stolen a match Christina used as toothpicks, Wade initiated an explosion that set him free, but was beaten by Francis and left for dead in the burning facility.

Later, Christina knocks out and kidnaps Vanessa with Ajax to lure Wade out. They take her as a hostage to an deteriorating Helicarrier. They are later confronted at the carrier not only by Wade, now the vigilante Deadpool, but also Colossus and Negasonic Teenage Warhead. While Deadpool butchered the henchmen, Angel Dust engaged Colossus, proving to be not only an equal match in strength, but even ended up overpowering him. Hilariously, she gained an accidental advantage as the fight tore her outfit, exposing one of her breasts, which embarrassed Colossus.

Christina, going by the name Angel Dust, is menacing, tough and sadistic. Though likely a victim of the Workshop, she had no qualms over torturing patients there herself, including Wade Wilson. She is fond of chewing on matches. She is the hench-woman and second in command to Francis, showing loyalty to him and providing him with medical aid, like stitching up his back. 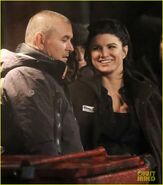