"You're brave, King. I'll give you that. But underneath all that swagger, I know what you really fear. What would hurt you more than anything else."
―Danica Talos[src]

Danica Talos was a vampire and the leader of House of Talos.

Danica was the leader of the House of Talos, a powerful vampire family who had become central in the vampire world after the fall of the House of Damaskinos. Worried by the threat Blade represents for her race, Danica and her minions go to Syria, where they find the tomb of Dracula, the first and most powerful vampire. They awakes him and bring him to Talos' place, asking him for help in Blade's killing.

Meanwhile, Blade had been captured by FBI and Police Chief Martin Vreede was ready to give him to Danica. When she arrives to take the Daywalker with her, the Nightstalkers intervene and save him, killing many vampires in the process.

Having his strength recovered, Drake accepts Danica's proposal and starts a hunt for Blade, decimating the Nightstalkers and capturing Hannibal King. Danica, her brother and Jarko Grimwood interrogate him about the Daystar, a biological weapon developed by Sommerfield, a deceased Nightstalker. King doesn't give any information about it, and just when he was about to be bitten again by Danica, who was her mistress when he was a vampire, Blade and Abigail Whistler arrive and start an attack to the base. During the battle, Danica fights Hannibal King and manages to defeat him, but when she was chocking him, the Daystar Virus was released and she was poisoned, and eventually killed, by it. Her body is then turned to ashes by sunlight when dawn comes.

Danica Talos was an ambitious vampire, whose aim was to rule over the vampire world after the death of Eli Damaskinos. She was violent and cruel, but she was also a strong leader, who even her brother was submitted to.

She posses all the vampires' typical powers: superhuman strength, speed, agility, reflexes, senses and stamina and virtual invulnerability to anything but sunlight, silver and garlic. She proves to be a very skilled fighter, able to subdue Hannibal King and even to dodge bullets during a battle.

Danica poisoned by the Daystar Virus. 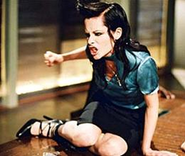 An enraged Danica shouts her frustration.

Danica confronts an imprisoned Blade.
Add a photo to this gallery
Retrieved from "https://marvel-movies.fandom.com/wiki/Danica_Talos?oldid=255075"
Community content is available under CC-BY-SA unless otherwise noted.