Darcy Lewis is a close friend and co-worker of Jane Foster. She became a doctor of astrophysics and was brought in by S.W.O.R.D. to investigate the bizarre goings on at Westview, New Jersey.

Darcy Lewis was traveling in a van with scientists Jane Foster, and Erik Selvig, when the mysterious weather event subject of Foster's research unexpectedly resulted in a powerful vortex before them. As they struggled with the zero-visibility conditions, the van collided with a man who had stumbled out of the dust into their path. The man, who only announced himself as Thor, was injured again when Darcy tasered him, prompting them to take him to hospital.

The following day, Darcy made a surprise discovery when she noticed the figure of a man in one of the photographic images captured from the atmospheric event. While Jane realized that the newcomer might be able to shed some light on the event, Selvig was more skeptical, sparking a lengthy disagreement that Darcy only rarely weighed in on to support the more fanciful elements of Foster's theories.

Darcy continued to tag along with the scientists, providing numerous observations about their rapidly changing situation that were sometimes even helpful.

Darcy tried to help Jane find a way to bring Thor back to Earth. They built a device to open a wormhole, but it failed. Darcy told Jane to wait since Thor promised to return.

However, one year passes and Darcy began to doubt that Thor would return at all. When Thor's brother Loki came to Earth, S.H.I.E.L.D. contacted Jane and sent her to Norway to an Astrophysics Lab.

After arriving in Norway, nobody in the lab had any idea why she and Jane were sent there. Darcy hacked into the computer and found live footage of Thor in Manhattan. She showed the video to Jane. After discovering from Erik Selvig that Thor had left Earth, Darcy comforted Jane, telling her that Thor would return again, but Jane disagreed and gave up.

"There you are, still muscly and all."
―Darcy Lewis[src]

Darcy Lewis is Jane Foster's intern, a quirky but quick-thinking poli-sci major who found herself in the middle of Earth's first contact with an alien civilization. And while she doesn't always understand everything that's happening around her, she doesn't hesitate to speak up about it. When Jane discovers an ancient cosmological event affecting the Earth, it's Darcy who has to pick up the slack when Jane disappears. She and Ian say their final goodbye to Thor after he returns to Asgard.

Now an astrophysicist, Dr. Darcy Lewis was brought to Westview, New Jersey by S.W.O.R.D., along with experts in other fields, to use their knowledge to try and analyse the Westview Anomaly. Once she arrived at the S.W.O.R.D. Response Base she was taken to her workspace by Monti.

Darcy analysed the radiation and discovered high levels of CMBR. She also noticed longer waves which mimicked television broadcast waves, using some equipment she tuned into the frequency and discovered "WandaVision".

Darcy and FBI agent Jimmy Woo used the footage from the show to both search for Monica Rambeau and identify the other hostages trapped inside of the anomaly.

Darcy and Jimmy went back to watching the show and saw Monica's expanded role. When she mentioned Ultron the broadcast skipped again. The barrier alarms went off and S.W.O.R.D. discovered that Monica had been ejected from the anomaly.

Jimmy and Darcy caught Monica up on what she had missed and then attended Tyler Hayward's briefing. In the briefing, Hayward showed footage of Wanda breaking into the S.W.O.R.D. Headquarters and supposedly stealing Vision's body, painting Wanda as a villain.

Later, Darcy pointed out that if Monica returned to the "Hex" she could have her mind wiped again. Rambeau realised that the Hex changed whatever passed through it to suit the decade of the sitcom and surmised that if they sent in something from the period of the sitcom it wouldn't be rewritten.

After sending in a 70s drone to communicate with Wanda, she exited the Hex, triggering the alarm which Darcy and the rest of the base responded to, to warn S.W.O.R.D. to back off.

Darcy, Jimmy and Monica were angry at the way Hayward had behaved so confronted him and were escorted from the response base. Jimmy and Monica took out the escorts and the trio put on S.W.O.R.D. disguises to get back into the base unnoticed. Darcy hacked into the S.W.O.R.D. database and accessed Hayward's files. In his files, Darcy discovered that Hayward was tracking Vision's vibranium decay signature along with Monica's medical report. Monica and Jimmy prepared to leave the base to meet with the aerospace engineer that Monica had contacted but Darcy warned her that her DNA had already been altered so passing through the Hex a third time might not be the best idea. Darcy opted to stay behind and finish hacking Hayward's files whilst her companions went to meet the engineer.

Darcy discovered "Project Cataract" and emailed the details to Jimmy when the barrier alarm sounded. Darcy went to see what was happening and saw Vision begging for S.W.O.R.D.s help whilst Hayward and the rest of the agents just watched the synthezoid disintegrate before their eyes. Darcy, appalled that no one would help ran over but was apprehended and handcuffed to the front of a Humvee. Moments later, the walls of the Hex began to expand, engulfing the perimeter and everything in its path including Darcy, transforming the base into a circus.

Darcy became "The Escape Artist" of the circus when engulfed by the Hex. Agent Monti had become the Strong Man and guided Vision, who he believed to be the new clown, over to the escape artist. Because Darcy was enthralled by Wanda she didn't recognise Vision despite his attempts to remind her of their encounter. He freed her of her enthrallment and they stole a food truck to try and get to Wanda.

En route, Darcy caught Vision up to speed with his life before Westview, right up until his death at the hands of Thanos. Multiple diversions cropped up on the trail to delay and prevent Darcy and Vision from reaching Wanda until Vision, frustrated phased through the roof of the van and flew away leaving Darcy alone in the truck.

As Hayward got in a vehicle to make his getaway, Darcy crashed the food truck into the side of the Humvee, disabling it and trapping Hayward inside. Darcy left Westview before the authorities arrived so she could avoid the debrief as she claimed they were "for the weak".

Darcy Lewis is an emotional and impulsive girl, surrounded by scientists. Despite her obliviousness to science, she is generally the first to notice what's going on around her. She notices the anomaly first. She is the first to realize that Thor fell out of the anomaly. She is also the first to piece together that although Thor may not be a God, but that it is completely plausible for primitive cultures to revered him as such, and articulates that to Dr. Selvig beautifully on Jane's behalf.

She is a good friend and is always ready to help Jane and Professor Selvig in their research and in solving the mystery behind the man they found in New Mexico's desert.

Darcy out in the field. 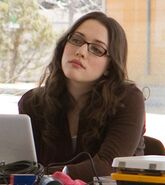 Darcy with her friend and colleague Jane Foster. 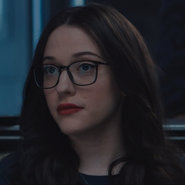 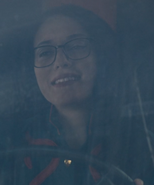 Why You Want Marvel Studios’ Darcy Lewis In Your Corner - Disney+
Community content is available under CC-BY-SA unless otherwise noted.
Advertisement