Daredevil is a 2003 superhero film based on the fictional Marvel Comics character of the same name. Mark Steven Johnson directed the film, which stars Ben Affleck as Matt Murdock, as well as Jennifer Garner, Michael Clarke Duncan, and Colin Farrell. The film follows Matt Murdock, a blind man who's a lawyer by day and a superhero by night. The film's budget was $100 million and the film grossed $180 million worldwide with $102 million coming from North America.

As a child, Matthew Murdock lived in Hell's Kitchen with his washed-up boxer father, Jack Murdock. Matt's father constantly reminds Matt to get an education and make something of himself, and not wind up like him. One fateful day, when young Matt takes a shortcut home, he stumbles across his father beating up a man at the behest of local mob boss Fallon. Horrified, Matt runs blindly away from the scene, and runs afoul of a forklift which swerves to avoid him and accidentally pierces a barrel of toxic fluid, drenching Matt's face in the substance.

An unspecified amount of time later, Matt awakens to find that he is blind. However, despite his loss of sight, his other four senses functioned with super-human accuracy, hearing and touch in particular. While Matt uses his radar-like hearing to train his body, his redeemed father decides to fight again in the ring. One night, Fallon approaches his father and orders him to throw the fight; when he does not, he is brutally murdered by a shadowy figure later revealed to be the Kingpin. Matt is heartbroken by his father's death.

Many years later, Matt Murdock is operating as the Daredevil, whom the press dubbed as The Man Without Fear, at night, and lawyer during the day, protecting Hell's Kitchen in particular. The Kingpin's numerous criminal activities have finally been picked by the press, and he decides to implicate his former partner Nicolas Natchios and make it appear that he was the Kingpin. Matt is intrigued when he meets Elektra Natchios, and despite her initial distrust of him, the two soon begin a relationship. While traveling with her father one night, they are attacked by the lethal and unstable assassin Bullseye, who was dispatched by the Kingpin. Despite Daredevil's best efforts, Bullseye kills Nicholas Natchios with Daredevil's billy club and implicates Daredevil, enraging Elektra, who swears revenge, since she only saw Daredevil during the fight.

Later, when Daredevil goes in search of Bullseye, he runs into Elektra, and reluctantly fights her. When Elektra impales Daredevil through the shoulder with one of her sai blades, she unmasks him and gazes at Matt in horror. Bullseye suddenly turns up, Elektra attempts to fight him and Daredevil can only watch helplessly (with his Radar Sense) as Bullseye kills Elektra. The first scene of the film is shown again, as Daredevil enters the church, intending to recuperate and recover his strength. Unfortunately, Bullseye tracks him down, and the two battle ferociously across the church with Bullseye gaining the upper hand after discovering Daredevil's weakness to loud sounds. After Bullseye manages to knock the air out of Daredevil, he raises a jagged metal pipe to kill him. Using his prodigious hearing, Daredevil hears a S.W.A.T. officer cock his rifle and times it so that his bullet fires horizontally through both of Bullseye's hands, incapacitating him. Daredevil then violently throws the assassin through a church window, and watches him plummet to the ground with grim satisfaction.

Daredevil then goes to the Kingpin's Headquarters for a climatic battle. Despite his appearance, the Kingpin turns out to be a powerful fighter; he overpowers Daredevil throughout most of the fight and eventually unmasks him. Daredevil loses sight of Kingpin, and bursts a pipe so that the rushing water would allow his radar hearing to see his enemy, and bring the tyrant to his knees. When Daredevil is about to deal the final blow, he contemplates what it means to be a hero, and offers the Kingpin a sardonic smile as he awards him his life. He informs the Kingpin that he is aware that he won't be imprisoned indefinitely, and as he leaves, tells him that he will always be waiting for him. He offers one final thought before departing, and orders the Kingpin to stay out of Hell's Kitchen. When Kingpin threatens to reveal Daredevil's identity, Daredevil taunts him in return with the fact that Kingpin got beaten by a blind man, which would make him the laughing-stock of the underworld. The Man Without Fear left before the crimelord swears vengeance against him.

The next morning, Matt and his law partner are drinking coffee at the shop, reading the newspaper on Fisk. Matt turns to the door when a woman enters at the shop, in a scene similar to the one introducing Elektra. Matt says he's going for a walk, and leaves. He goes to the roof of his apartment and finds a copy of Elektra's necklace hanging, with Braille on it. At his office, Ben Urich is writing his latest story, an expose on who Daredevil really is. He's about to print it, but then, out of respect for Daredevil's engagement, decides to delete his story. He exits the New York Post office into the night outside and sees Daredevil standing at the rooftop. Urich whispers "Go get them, Matt" to which Daredevil nods his head and takes off, leaping off the building to fight another hoodlum.

Halfway through the film's credits, police are guarding a hospital room. Inside the room, Bullseye, now heavily bandaged is annoyed by a fly. Off camera, the fly is struck with a syringe on the wall. Bullseye says one word out of the side of his mouth: "Bullseye". 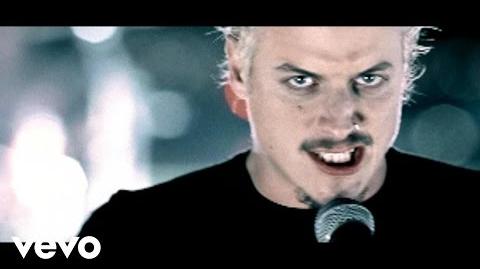 Fuel - Won't Back Down 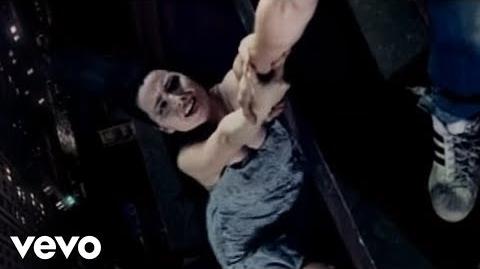 Evanescence - Bring Me To Life

Retrieved from "https://marvel-movies.fandom.com/wiki/Daredevil_(2003)?oldid=269993"
Community content is available under CC-BY-SA unless otherwise noted.