Death is a cosmic entity.

When Loki is eventually defeated, the Other complains to Thanos that the Earth's inhabitants are not as weak as they were thought to be and that they cannot be ruled, he declares that challenging the heroes of Earth would be to court Death. To this, Thanos simply smiles.

Guardians of the Galaxy: The Art of the Movie

Death embodies decay and can possess the soul of a living being. Often taking the form of a woman, Death can manipulate reality, time, and space, and came into existence at the same time as Entropy, Eternity, and Infinity. Immortals are immune to death's ability. Thanos wanted to rule the universe with Death. Trying to impress her, he killed all life in half of the universe with the snap of his fingers.

Death is one of the four Cosmic Entities that forged the Infinity Stones, with the others being Eternity, Entropy, and Infinity. Death and the other cosmic entities can be seen on the temple walls on Morag and in a hologram by The Collector.

Death seen on the floor of the Temple Vault on Morag 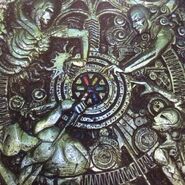 The Four Cosmic Entities including Death, Eternity, Infinity, and Entropy.
Add a photo to this gallery

Retrieved from "https://marvel-movies.fandom.com/wiki/Death?oldid=226262"
Community content is available under CC-BY-SA unless otherwise noted.