Thor
The Avengers
The Destroyer was a magical, consciousless entity built by Odin to defend the Asgardian vaults. It will complete any mission given to it without question, regardless of how long the mission or who gets in its way. Its primary weapon are fiery beams of energy emitted from its face, but it is also superhumanly strong and nearly invulnerable to damage.

The Destroyer was an emotionless, speechless, order-driven, metal automaton made by Asgardian magic. It was an empty suit of armor which can be controlled by the ruler of Asgard and wielder of Gungnir, which allows them to partially possess the armor and perceive what happens around it.

On the day of Thor's coronation, three Frost Giants sneaked into Asgard's weapons vaults with the help of Loki Laufeyson and took the Casket of Ancient Winters. Odin sensed this and had the Destroyer emerge from its resting place to attack the intruders. One of them attempted to use the Casket on the Destroyer, but the armor vaporized all three Frost Giants before returning to its resting place.

Some time later, when Thor was banished due to his actions on Jotunheim, Loki (who was filling in for Odin after falling into Odinsleep) sent the Destroyer to Earth to destroy his brother and everything else that got in the way. The Destroyer passed through the Bifrost Bridge and landed in New Mexico, Earth. Once there it encountered agent Phil Coulson and a team of SHIELD agents but quickly destroyed their cars before moving onto the small town. Once there it went on a rampage on the town but it encountered the Warriors Three and Lady Sif. Volstagg tried to jump it but was smacked back onto a car. But before the Destroyer could kill him, it was stabbed by Sif and briefly taken out of commission.

Once it recovered, it reformed to face Sif and blasted her off of itself. When the four tried to regroup, Destroyer blasted them into different buildings and blasted Volstagg, badly hurting him. Once everyone was at safe distance, Thor himself approached the Destroyer and begged Loki to stop the rampage and take his life instead. The Destroyer powered down its beam but smacked Thor in the face, fatally wounding him. However, as the Destroyer was walking back to the Bifrost site, Mjolnir returned to Thor and restored his powers. The Destroyer tried to blast Thor but was knocked over. Once it came back into commission Thor lifted it off the ground into a tornado. The Destroyer tried to blast Thor, but the god of thunder hurled his hammer though its head, shutting it down permanently.

The Destroyer was collected by S.H.I.E.L.D. after Thor defeated it and is kept in the S.H.I.E.L.D. Headquarters. A year later, scientists from SHIELD managed to reactivate the energy of the Destroyer. After that, Phil Coulson ordered them to disband, and it turned into weapons.

During Loki's escape from his prison on the S.H.I.E.L.D Helicarrier, Phil Coulson attacked the Asgardian with a gun made from the Destroyer's body, actually sending the god of mischief flying through a wall on his second attempt, proving its effectiveness.

The Destroyer was a mindless weapon, which completes every task assigned by the ruler of Asgard, whoever he might be. It has enormous powers, among which are superhuman strength and durability, energy projection from the head, and the capability of remodeling itself during battle. Once the Destroyer is engaged in a task, it completes it, whatever the cost.

While not as powerful as the comic version, despite this, the Destroyer is one of the most powerful non-living weapons in the MCU. The Destroyer operates at the behest of whomever holds Gungnir, the Asgardian ruler's spear, and can therefore be used for good or for evil depending on who sits on the throne. It can also therefore be stopped by an attack on its vulnerable master. The Destroyer was programmed solely for battle and destruction.

The Destroyer on rampage. 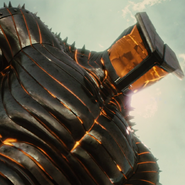 The Destroyer after being struck by Mjolnir 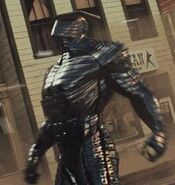 The Destroyer on Earth.

Filming picture of The Destroyer.

Close up picture of The Destroyer. 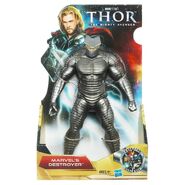 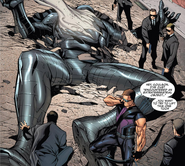 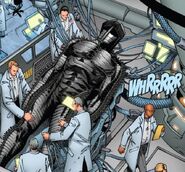 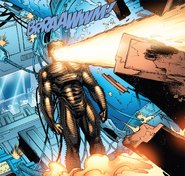 Concept art for a S.H.I.E.L.D. gun built from the Destroyer.