"Nothing goes over my head, my reflexes are too fast, I would catch it."
―Drax[src]

Drax, also known as Drax the Destroyer, is a member of the Guardians of the Galaxy.

A physical brute, Drax has a personal vendetta against Ronan, who killed his family. Now fueled by pure rage, Drax will stop at nothing to take his revenge on the most dangerous being in the galaxy. While locked up in Kyln Prison he tries to kill Gamora. He is stopped by Peter Quill, who convinces him that Gamora wants to kill Ronan as well, and that Quill along with Rocket and Groot are on the same mission. Drax helps in the escape, and sets out on the quest to deliver the Orb of Morag to the Collector.

While at Knowhere, he gets into a scuffle with Rocket after a bit of gambling. He then calls for Ronan to confront him on Knowhere. A battle ensues and Drax, Groot, and Rocket are cut off from Quill and Gamora. After reuniting with their comrades on the Ravager ship, they devise a plan to stop Ronan from destroying Xandar. Drax accompanies Quill, Groot and Gamora on Ronan's ship. Drax along with Gamora, Quill and Rocket are saved from the crash by Groot using his own body as a cocoon to shield them from the dangerous fall and seemingly dying. When Quill uses the Gem inside the Orb to help defeat Ronan, he along with Rocket and Gamora help absorb the energy. After this, Drax comforts Rocket by petting him on the head like a pet; This gets him to stop crying. Drax joins the other Guardians on their rebuilt ship and begin their further adventures.

Later on, Drax was sitting in the ship and cleaning his knives when the regrown "baby" Groot began to dance to the Jackson 5's song.

"You need to find a woman who's pathetic, like you."
―Drax[src] 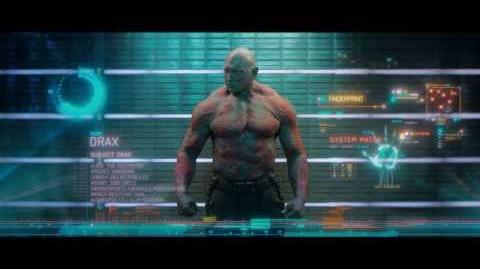 Meet the Guardians of the Galaxy Drax
Meet Drax 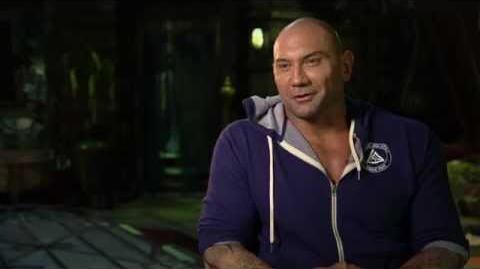 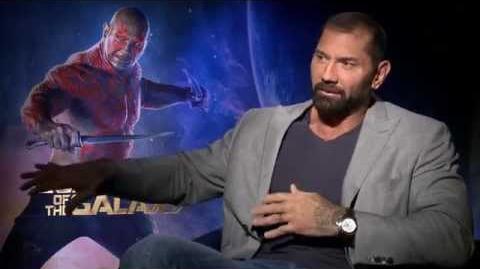 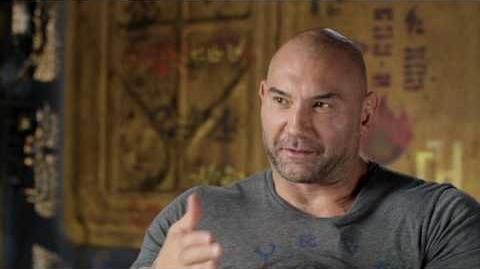 Guardians of the Galaxy Vol. 2 Dave Bautista "Drax" Behind the Scenes Movie Interview 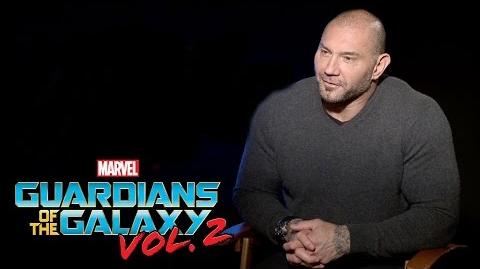 Dave Bautista on Marvel Studios’ Guardians of the Galaxy Vol. 2

Retrieved from "https://marvel-movies.fandom.com/wiki/Drax?oldid=262918"
Community content is available under CC-BY-SA unless otherwise noted.