Venom
Venom: Let There Be Carnage
Spider-Man: No Way Home

"Hey, buddy, can I tell you something, man to man? Because I have spent a significant amount of time with one of these creatures up my ass! It's not very fun. And I also found out that they're killing you."
―Eddie Brock[src]

Edward "Eddie" Brock is a freelance reporter who becomes the host of the symbiote alien known as Venom.

Eddie Brock was an investigative reporter living in San Francisco, and dating lawyer Anne Weying. Eddie used Anne's connections working for the law firm representing the Life Foundation to get an interview with the company's CEO, Carlton Drake. However, Eddie also took information from Anne's confidential emails and directed questions to Drake about the Life Foundation's more unethical practices. The stunt got both Eddie and Anne fired from their respective jobs, and ended their relationship.

Six months later, Eddie was approached by Dr. Dora Skirth from the Life Foundation who had become concerned about Drake's experiments with alien symbiotes that he was bonding to the city's homeless. Skirth wanted to expose Drake, and convinced Eddie to assist her by breaking into the Life Foundation and obtaining evidence of Drake's crimes. During the break in, Eddie found a local homeless woman named Maria, who he knew, as part of the experiments. As he tried to rescue her, the alien symbiote transferred itself from Maria to Eddie, killing the woman in the process. Eddie managed to escape the Life Foundation.

Eddie soon began experiencing strange symptoms relating to the symbiote possession. Eddie eventually reached out to Anne for help, and her new boyfriend, Dr. Dan Lewis examined him and discovered the symbiote's aversion to sound. Meanwhile, Eddie had been targeted by Carlton Drake since he was now in possession of the sole remaining living symbiote from the Life Foundation experiments. Mercenaries attempted to kidnap Eddie, causing the symbiote to take over and transform him into a monstrous creature. Eddie's new abilities allowed him to repel the attackers.

Taking shelter at a lighthouse, Eddie learned that the symbiote is sentient and named Venom. It persuaded Eddie to form an alliance of sorts; while Eddie would have the power and abilities that Venom can provide, Venom would experience life through Eddie. Eddie agreed and began to use his newfound abilities, breaking into his previous workplace to submit evidence about Drake's crimes. Once again, Eddie was attacked by mercenaries and managed to escape. However, Eddie's power was not without cost - the symbiote was slowly rotting his internal organs. Eddie used an MRI machine to separate from Venom, but was kidnapped by Drake's men.

Now powerless, Eddie learned that Drake had bonded with the Riot symbiote and planned to launch a craft into space to bring more of the symbiotes to Earth to assimilate the human race. Anne Weying, having bonded with Venom, arrived to rescue Eddie just as he was about to be executed. Eddie reclaimed the Venom symbiote and fought Drake and Riot, finally killing them in an exploding spacecraft. Venom seemingly sacrificed himself in order to save Eddie.

Sometime after, Eddie and Venom - who survived - secretly work to protect the city while Eddie returned to journalism and rebuilt his friendship with Anne. Visiting San Quentin Prison, Eddie prepared to interview the serial killer Cletus Kasady. 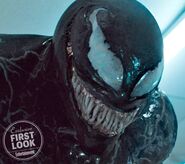 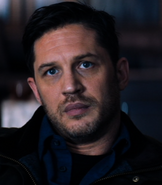