Jennifer Garner
Elektra Natchios is an assassin and the lover of Matt Murdock.

Elektra Natchios was Daredevil's love interest. Her father was killed by Bullseye and she blamed Daredevil for his death. Elektra was trained by Stick as a child so she practiced and held sai that she would use to kill Daredevil. When she finally confronted the vigilante, she impaled him by his shoulder but before she would kill him, she wanted to know who she would be actually killing. She unmasked him and was surprised to find Matt Murdock. Elektra then learned that it was Bullseye who murdered her father. Ironically, however, when she confronted him, Bullseye (Who had been attracted to Elektra due to her beauty, skills and hatred for him) beat her in battle: slitting half of her throat and impaling her in the gut. When Bullseye left, she was able to say goodbye to Daredevil before dying in his arms.

It was revealed that after Elektra died, her old trainer Stick resurrected her and trained her in martial arts in the Way of Kimagure (the ability to control time, the future and life and death), a benevolent dichotomy of The Hand. On expulsion from Stick's school - a life lesson for her heart of anger and hate - Elektra became an assassin for hire. She soon became acquainted with a single father and his daughter, Abby. She discovered the two were being hunted down by the organization known as the Hand. Elektra, with the help of Stick and his assistants, protected Abby and her father. Abby was then revealed to be a great warrior known as the Treasure: a powerful weapon that could tip the scales of the Hand's power. Elektra had a final showdown with the leader of the Hand. If Elektra won, Abby would go free; if the leader of the Hand won, then Abby would belong to the Hand. In the battle, Elektra was nearly beaten - then, realizing that the Hand leader was her mother's killer, Elektra fatally impaled him through the heart with one of her sai, and flipped him down a well where he disintegrated. A final scene shows Elektra resurrecting Abby the same way Stick resurrected Elektra. 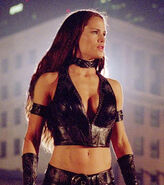 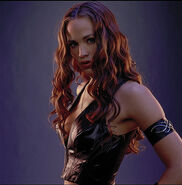 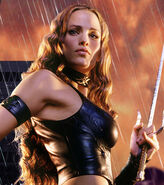 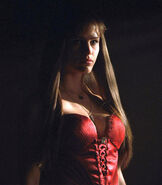