Ellie Phimister, also known as Negasonic Teenage Warhead, is a mutant who can generate and manipulate energy.

Negasonic is a trainee under Colossus at Xavier's school for gifted youngsters. When Deadpool had caused numerous traffic collisions on a highway while fighting Ajax and his men, Colossus and Negasonic flew in the Blackbird to his location. As Colossus tried to convince Deadpool to join the X-Men, Negasonic watched and was annoyed by Wade's behavior who pointed her out as the stereotypical mean teenage girl which she agreed with. When Ajax managed to escape Deadpool attacked Colossus out of anger only to break most of his limbs. As the two prepared to take him back to the X-Mansion Deadpool cut off his own hand and escaped into a garbage truck. When Ajax kidnapped Wades girlfriend Vanessa he went to the X-Men to get the help of her and Colossus. Arriving at the location of where Ajax was holding Vanessa which was at an abandoned aircraft carrier Wade engaged Ajax while Negasonic Teenage Warhead and Colossus took on Angel Dust. To save her mentor who was being strangled by Angel Dust she used her explosive powers to knock Angel Dust out which also destroyed the aircraft carrier and knocked her out as well. Colossus however got both of them to safety and the two later helped locate and rescue Vanessa. After Wade killed Ajax he and Vanessa reunited while Colossus and her left with Negasonic finally acknowledging him as cool.

Negasonic Teenage Warhead is pretty much exactly what the opening credits of the movie said she is: A Moody Teen. She is sarcastic, unmotivated, very antisocial, and even her outrageous mutant name is a good indicator of how little she cares what anybody thinks of her. There really isn't anything particularly endearing and heroic about her besides the fact that she is on the side of the X-Men, among other "heroes". Although she remains obedient to her chivalrous teacher, she treats her duties as a hero mostly like chores she cares little about, and would even take a moment to write a Twitter post on her phone right at the start of a battle.

Besides her super human abilities, she is no different than a normal angsty teenager. She is snarky, rude, and isn't afraid to insult people whom she doesn't like, especially Deadpool. Though she does eventually warm up to him, calling him "cool." She does crack a smile at some points, especially when Deadpool makes a fool of himself. 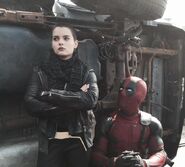 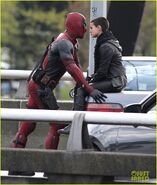 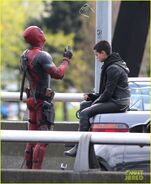