Emil Blonsky was a captain in the British Royal Marines. After being loaned to SOCOM at the request of Joe Greller, Blonsky was injected with the Super Soldier Serum and recieved a blood transfusion from Bruce Banner, which transformed him into the Abomination.

Emil was born in Russia and raised in England, where he eventually joined the Royal Marines and was promoted to the rank of captain. Despite receiving an incredible track record, Emil refused to be promoted to colonel, claiming that he wanted to be a fighter for as long as he could.

After General Ross discovered Banner's location, Joe Greller put together a team to capture him, led by Emil. Following a ferocious battle in the soft drink bottling plant where Banner transforms into the Hulk, escapes Emil, and ends up in Guatemala.

Emil reports to Ross that Banner evaded them in Brazil because of the appearance of a large green monster. Ross explains that the monster is Banner, and that he was created accidentally during an experiment in radiation-resistance that was inspired by World War II era military bio-force enhancement research (or "Super-Soldiers", as Emil puts it).

Emil, seeking both revenge and power, volunteers as a test subject in order to capture Banner. He receives a small dose of a mothballed reproduction of the original Vita Ray serum, created by Dr. Reinstein for Weapon Plus. He leads an assault on Banner at Culver University, during which Betty is knocked unconscious. Despite Emil's amplified strength, speed and agility, the Hulk crushes most of the bones in Emil's body.

Emil, whose super-soldier treatment has healed all his injuries, reawakens ready to fight the Hulk again. The general gives him a larger dose of the Super Soldier serum but it's clear that while the reproduced serum is effective, it was not a perfect copy of the original Super Soldier serum as there were side effects such a physical deformities(his muscle structure started to change and his spinal column was contorting) and increases aggression which seemed to inhibit rational thinking. Desperate for more power, demands Samuel Sterns subject him to a dose of Banner's gamma radiation treatment. Sterns warns that the combination of the Super Soldier formula and a gamma treatment would be an unpredictable combination that could turn him into an "abomination". Blonsky is less than concerned about this, and Sterns promptly administers the gamma charge. As Blonsky mutates into a monstrous creature, he knocks Sterns aside and an irradiated sample of Banner's blood-derivative drips into an open wound on Sterns's temple.

In an attempt to draw the Hulk out, the Abomination goes on a rampage through New York. Hulk jumps out of Ross' helicopter and after a brutal battle the Hulk manages to defeat the Abomination by strangling him with a huge chain, though he releases his grip after a plea from Betty. The Abomination collapses, and the Hulk flees the scene with the army in hot pursuit.

The Government decides to free Emil after he's taken captive by General Ross, since he's a famous war hero and he's believed to have wrought havoc because he was trying to defend himself from the attack of the Hulk. Thanks to the combined effort of Phil Coulson, Jasper Sitwell and Tony Stark, The Abomination remains in captivity.

Banner indirectly refers to Emil when he tells Tony Stark that the last time he was in New York, he did significant damage to Harlem.

It was mentioned that Emil is incarcerated in a cryo-cell in Barrow, Alaska. There is a guard night shift assigned to the cell.

In The Incredible Hulk, as a veteran soldier, Emil has a deep passion for combat, which is the main reason why he had refused being promoted from the rank of captain over the years.

After his first encounter with Hulk, Emil became so obsessed with defeating the green superhuman to the point that he slowly lost his sanity and emotions in the process; proving that he was nothing but a selfish-glory seeker.

When Emil discovered that Samuel Sterns had Bruce Banner's gamma radiation blood samples, he forced Sterns into injecting him with the blood samples, but also ignored the warnings that there could be unforeseen consequences which proved how obsessed Emil had become in his goal to surpass the Hulk in terms of physical prowess.

After he transformed into the Abomination, Emil accepted his new form and immediately became corrupted by his new found powers, becoming far more arrogant, cruel, sadistic, aggressive, violent, ruthless, unstable and obsessive. He went on a rampage through Harlem and killed several civilians and soldiers simply to show off his new found powers and that he had no regard for innocent lives.

Blonsky seeing the Hulk for the first time.

Ross informs Blonsky that the Hulk is Banner.

Blonsky wants in on round 2 of going after Banner.

Blonsky convinces Ross to make put the knowledge he knows now into the body he had ten years ago.

Blonsky being getting his first injection of Super Soldier Serum.

Blonsky is ready for Round 2.

Blonsky firing at the Hulk.

Blonsky mouths off to the Hulk.

Blonsky after mouthing off to the Hulk.

Blonsky starting his transformation into the Abomination. 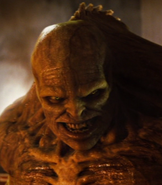 Abombination after being choked out by the Hulk. 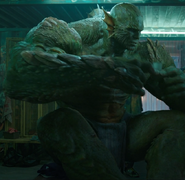