157 minutes
Eternals is the twenty-sixth film in the Marvel Cinematic Universe that focuses on a group of beings known as the Eternals and their battle against the Deviants.

In 5000 BC, ten superpowered Eternals from the planet Olympia are sent by the Celestial Arishem to Earth to fight the invasive Deviants. Over the millennia, they protect humanity from the Deviants but are not allowed to interfere in human evolution. They kill the last of the Deviants in 1500 and the group's opinions differ about their continued responsibilities. They spend the next five hundred years mostly separated from each other, waiting for Arishem to send them home.

In the present day, Sersi and Sprite live together in London. After Sersi was left by her partner Ikaris over five hundred years earlier, she now has a relationship with Dane Whitman, who works at the Natural History Museum. When the trio is attacked by the Deviant Kro, Ikaris appears and chases the creature away. Realizing the Deviants have returned, they prepare to assemble the remaining Eternals. They travel to South Dakota only to find that their leader, Ajak, has been killed by a Deviant.

Sersi learns that Ajak has given her the ability to communicate with Arishem, who reveals that the mission of the Eternals was not to fight the Deviants, but to prepare Earth for the "Emergence". Arishem explains that for millions of years, the Celestials have been planting their seeds in populated planets so that a new Celestial can be born. The Celestials sent the Deviants to destroy the apex predators of the planet to ensure the development of life, but the Deviants evolved and hunted the planet's populations, resulting in the Eternals being sent to cull them. Arishem explains that Earth has reached the necessary population for the birth of the Celestial Tiamut, which will result in the Earth's destruction.

Having learned to love humanity, the Eternals reassemble and decide to prevent the Emergence. However, Kro and the Deviants attacks them. He kills and absorbs Gilgamesh before fleeing. They visit Phastos, who reveals that through the "Uni-Mind"—a connection between all Eternals, they can allow Druig to put Tiamut to sleep by means of mind control. However, Kingo leaves the group because he does not want to face Arishem and Ikaris reveals he was informed of the Emergence by Ajak centuries before and fed her to the Deviants to prevent her from stopping it. Sprite joins Ikaris because of her unrequited love for him.

After Makkari locates the place of Emergence at the foot of an active volcano in the Indian Ocean, the Eternals battle Ikaris and Sprite. Kro, who wants revenge on the Eternals, arrives and attacks them. Thena fights and kills him. Druig knocks out Sprite and they work together to subdue Ikaris. Phastos activates the Uni-Mind, which Ikaris joins out of his love for Sersi. Druig is unable to stop Tiamut so Sersi, who manipulates substances, turns Tiamut into ice. Plagued by feelings of guilt, Ikaris then flies towards the sun. Sersi, who still has the Uni-Mind, gives Sprite the ability to age like a human.

The team parts ways, with Thena, Druig and Makkari departing on their spaceship Domo to find other Eternals. Sersi, Phastos, Kingo, and Sprite remain on Earth. As Dane professes his love for Sersi and is about to reveal a secret about his family history, she along with Phastos and Kingo are teleported into space by Arishem, who is displeased that they chose to sacrifice a Celestial for the people of the planet, but elects to spare them if their memories will show that they are worthy to live. He vows to return for judgement.

In a mid-credits scene, Thena, Makkari and Druig are visited by Eros, the brother of Thanos, and his assistant Pip, who offer their help. In a post-credits scene, Whitman opens an old chest inherited from his ancestors that contains the legendary Ebony Blade, while an off-screen voice asks him if he is ready for it.

The film was shot in London and Oxford, England, and in the Canary Islands. 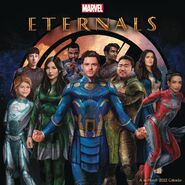 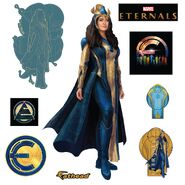 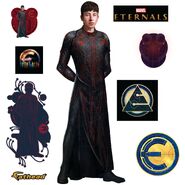 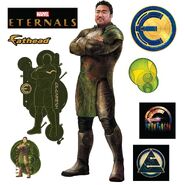 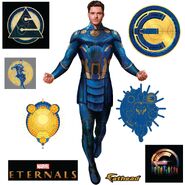 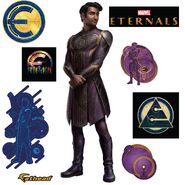 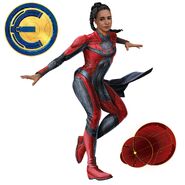 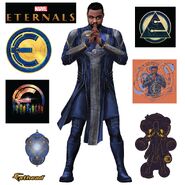 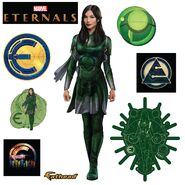 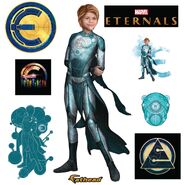 Meet the cast of Marvel Studios' The Eternals at D23 Expo!

Get to Know the Eternals - Marvel Studios' Eternals

Eternals, The World According to Jeff Goldblum, Hawkeye - What's Up, Disney+

Superlatives with the Cast of Marvel Studios' Eternals - What's Up, Disney+

Behind the Magic- The Visual Effects of Marvel Studios’ Eternals