Gamora was a Zehoberi, the "adopted" daughter of Thanos, and the adoptive sister of Nebula. She shared the history of her counterpart up until 2014 when instead of going to aid Ronan in retrieving the Power Stone, Nebula connected to her 2023 self.

As Gamora slipped away after the battle concluded, it is unknown if she was destroyed with the rest of Thanos' army or if she survived due to changing allegiance.

After Nebula and James Rhodes traveled back in time to 2014 to retrieve the Power Stone before Peter Quill, Nebula's implants interfaced with those of her 2014 self as Thanos prepared to send her and Gamora to Ronan. Through the connection between the two Nebulas, Thanos was able to learn of his future self's fate and success and captured the future Nebula. Nebula, knowing Gamora's hatred for her father, attempted to turn Gamora against Thanos early by telling her that Thanos sacrificed her future self to get the Soul Stone, but was interrupted before she could finish.

After the 2014 Nebula transported Thanos and his army to the present, Gamora visited Nebula to ask her about their relationship in the future. After Nebula admitted that she tried to kill Gamora but they became sisters in the end, Gamora freed Nebula to help stop Thanos. Nebula and Gamora rescued Clint Barton from the 2014 Nebula and tried to convince her to change sides. The younger Nebula refused and was shot in the chest by her older self when she turned her gun on Gamora. During the battle, Gamora saved the life of a shocked Peter Quill, who mistook her for the Gamora he knew, causing her to kick him in the groin. Having learned of their relationship, Gamora was left incredulous that she chose Quill, leading Nebula to comment that it was a choice between Quill and a tree.

After the battle, the 2014 Gamora survived, but she slipped away from the battlefield. With the present day Gamora having died before Thanos used the Infinity Stones, she was not restored along with everyone else. Quill vowed to find the Gamora from 2014.

Gamora is in many ways a warrior at heart. She is strong-willed, determined, and resourceful. She carries herself with the dignity of a true warrior, but she is also a bit of a lone wolf due to her upbringing. 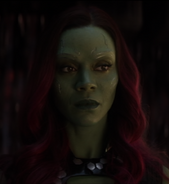 Retrieved from "https://marvel-movies.fandom.com/wiki/Gamora_(Time_Heist_2014)?oldid=269220"
Community content is available under CC-BY-SA unless otherwise noted.