watch 03:27
Wiki Targeted (Entertainment)
Do you like this video?
Play Sound

"I thought you were more than just a shield."
―Georges Batroc[src]

Georges Batroc was a top Algerian assassin. He was a skilled military tactician, having formerly been in the French Foreign Legion.

After the Blip, Batroc joined LAF and attempted to kidnap US Air Force colonel Vassant but was stopped by the Falcon.

Georges and his men hijack the Lemurian Star that contained S.H.I.E.L.D agent Jasper Sitwell and many others that were taken as hostages. He then demanded a ransom for them and the carrier that happened to contain S.H.I.E.L.D. information. A strike team is assembled by S.H.I.E.L.D. containing Captain America, Black Widow, Brock Rumlow, and several other agents. Eventually they free the hostages and after a fight with Steve they almost capture him but he escapes. However, he is later captured and it is revealed that Nick Fury hired him so that he could delay a project that would kill 20 million people in the process, including President Ellis, Bruce Banner, Tony Stark, and Stephen Strange. This however failed.

Georges is an experienced mercenary and thief, and can speak both French and English. Although as a mercenary, he does not hesitate to perform any number of criminal acts for his clients. He is an expert hand-to-hand combatant and specializes in savate (French-style kickboxing). Georges is also former French Foreign Legion and has Olympic athletic prowess. 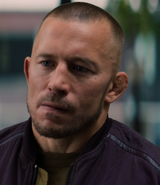 Retrieved from "https://marvel-movies.fandom.com/wiki/Georges_Batroc?oldid=283236"
Community content is available under CC-BY-SA unless otherwise noted.