Major Glenn Talbot was a long time friend of Betty Ross and a former military officer who became a bioscience executive for a private company who acted as a contractor of the U.S. Government. When he discovered Betty and Bruce Banner's research, he tried to convince them to quit the lab and start working for his company, and at their refusal, he tries to force them to.

When Banner is involved in the "Hulk incident", Talbot becomes obsessed in taking a sample of the brute for a super-soldier program. When the Army takes captive in his own house Banner, Talbot goes to him and starts bullying him, to the point he transforms into The Hulk. Having underestimated the Hulk's effective strength, Talbot is easily thrown away by the beast, who breaks free.

Talbot, wounded during the brief fight, tries to take the sample he wants again when general Thundebolt Ross, his former superior and mentor, manages to capture Banner. The scientist is put in a restrictive chamber and forced to transform, but once again The Hulk's strength has the upper hand and he breaks free before the sample is taken. Ross orders an evacuation of the underground base, but Talbot ignores him and, being the one in charge for the Government's decision, orders a complete lockdown and follows the Hulk in the corridors. Having blocked the hulkling behemoth with a special foam, he tries to kill him with a rocket launcher, but the rocket bounces off Hulk's impenetrable skin and kills Talbot.

Talbot was an ambitious, pushy guy who wants to make a fortune and become famous in no time and at any cost. He was arrogant and lacks of intellect in making his plans. He developed a strong rivalry towards his former mentor, Thaddeus Ross, who now sees him as a "traitor" of the army. 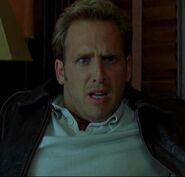 Retrieved from "https://marvel-movies.fandom.com/wiki/Glenn_Talbot_(Earth-400083)?oldid=281903"
Community content is available under CC-BY-SA unless otherwise noted.