"So here we are: a thief, two criminals, an assassin, and a maniac. But we're not going to stand by while evil wipes out the galaxy."
―Peter Quill[src]

The Guardians of the Galaxy are a team of intergalactic super-heroes.

The Guardians of the Galaxy were thrown together by sheer chance after Star-Lord stole the Orb of Morag and attempted to sell it, only to be intercepted by Rocket and Groot, Who were trying to claim the bounty on his head and Gamora who was trying to keep the Orb away from Ronan on Xandar, resulting in all four of them being caught and sentenced to the space prison the Kyln. Learning that Gamora had a buyer for the Orb willing to pay four million credits, Rocket and Groot decided to abandon their efforts to claim the bounty for Quill in favor of selling the Orb, the four gaining a new ally in the form of Drax, another prisoner in the Kyln who sought Ronan's death; after Quill stopped him from killing Gamora by arguing that Ronan would be after her for her betrayed, Drax concluded that staying close to Gamora would ensure that he would have a chance to confront Ronan.

Although the group were able to escape the Kyln through a plan conceived by Rocket and travel to Knowhere to sell the Orb, to The Collector. They found themselves facing unexpected complications when Drax deliberately broadcast their location to Ronan. This resulted in Ronan and Nebula claiming the Orb, which contained the Power Stone and Quill and Gamora nearly dying before they were rescued by Quill's old Ravager contacts. Realizing that Ronan would be going after Xandar to settle his old vendetta, the five decided to try and stop him before he could hit the ground, each concluding that they couldn't simply stand by and do nothing as innocent lives were destroyed on such a scale.

Aided by the Ravagers, the team were able to limit collateral damage on Xander, force Nebula into retreat, and destroy Ronan's ship, but during the conflict the Milano was badly damaged and Groot was seemingly destroyed while protecting the other four from the crash, which Ronan was also able to survive. Although Ronan mockingly referred to them as the 'Guardians of the Galaxy' while discussing how they had failed, Quill was able to distract Ronan at the last minute for long enough that Drax and Rocket were able to destroy the hammer where he had been keeping the Power Stone. With the stone now free, Quill with Gamora, Drax, and Rocket sharing its burden, they use it to destroy Ronan.

With their criminal records cleared, the Milano repaired, The Guardians leave in the rebuilt Milano accompanied by a twig recovered from Groot, which is already beginning to grow and regenerate. 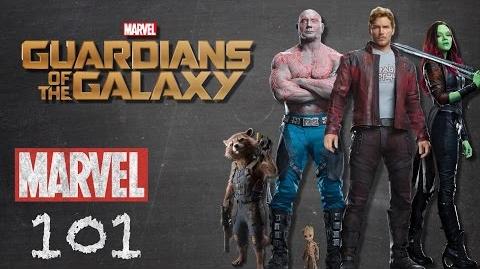 The Guardians of the Galaxy - Marvel 101

Retrieved from "https://marvel-movies.fandom.com/wiki/Guardians_of_the_Galaxy_(team)?oldid=238577"
Community content is available under CC-BY-SA unless otherwise noted.