Initially, HYDRA started out as a cult who centered around the fanatical worship of Hive, inhuman that was exiled to the planet Maveth by ancient inhumans after being banished from Earth.

However, overtime, HYDRA had evolved; to the point that it become global terrorist organization, who's goal was world domination.

During the events of HYDRA Uprising; it was revealed that HYDRA had secretly infiltrated S.H.I.E.L.D. around the time that the agency was founded, as the public (incorrectly) believed that HYDRA had been dissolved; following the apparent death of Johann Schmidt, but in truth, they were actually in hiding; until the time was right to reveal themselves to the public.

HYDRA was organized by Johann Schmidt after becoming the Red Skull. It was the Nazi-German Military's deep science division. It was named after the mythological creature and had used its original phrase: "cut off one head, two more will take its place". Their main purpose was to create advanced weapons for the Nazis. They stormed a castle in Norway where the mystical object known as the Tesseract was buried for hundreds of years. They used its power to create advanced technology weapons and tanks (its power could create laser ammunitions). After discovering such power they separated from the Nazi-German army and created their own Super-Army to rule over the world. HYDRA had many bases around Europe but the US army sent the SSR team with Captain America and the Howling Commandos to destroy the HYDRA factories. Then, after the Red Skull died HYDRA was dissolved and its advanced technology was studied by Stark Industries.

The series picks up in 1946 after World War 2 has ended and HYDRA has been dismantled. After Peggy Carter stops Dr. Ivchenko, real name Johann Fennhoff, from committing a deadly terrorist attack on Time Square Fennhoff is imprisoned with Arnim Zola as his cellmate. Zola tells Fennhoff that he is aware of Fennhoff's work and his mastery of controlling the mind. He then tells Fennhoff that he wishes to collaborate with him and that even though he is imprisoned, he is in a American prison and that America is "the land of opportunity".

In 1975, S.H.I.E.L.D. discovered that the Soviets had a piece of old HYDRA technology. Howard Stark sent agents to Germany to stop them. The agents failed. However, a S.H.I.E.L.D. consultant named Hank Pym used a suit he developed that allows him shrinks and control ants, he cross Germany unnoticed and destroy the HYDRA technology.

Though HYDRA was thought to have been long since been disbanded, their weapons and technology still existed. What was left was kept by S.H.I.E.L.D. for their program "Phase 2," which involved reactivating the HYDRA weapons with the Tesseract for use against super-powered or other-worldly forces. Steve Rogers discovered several cases of HYDRA weapons aboard the S.H.I.E.L.D. Helicarrier.

Rogers also mentioned during a meeting that Bruce Banner should study Loki's staff while hunting for the Tesseract, as it functioned similarly to HYDRA's weapons.

Agent Phil Coulson's team travels to Peru to investigate an "0-8-4", an unknown object of concern to S.H.I.E.L.D. The object is an anachronistically advanced metal device in an ancient pyramid. Coulson's team eventually discovers that it is a Tesseract energy-powered weapon designed by surviving Nazi/HYDRA scientists who escaped Allied justice after WWII and were recruited by Peru. A team of Peruvian military police attempts to kill the team in order to retrieve the device, but Coulson's ingenious team members foil them. In the end, the 0-8-4 is deemed too dangerous to be allowed to exist, and it blasted off on a rocket into the Sun.

It is revealed by Fitz and Simmons that S.H.I.E.L.D. was formed to combat HYDRA.

It is revealed by the computerized brain of Arnim Zola that since S.H.I.E.L.D. was founded after World War II, they recruited him and other HYDRA operatives, where they conspired against their new employers. HYDRA secretly operated within its ranks, sowing chaos across the world in the hope that humanity would willingly surrender its freedom in exchange for safety.

They developed a data-mining algorithm that can identify individuals who might become future opponents to HYDRA's plans. The new helicarriers, created for Project Insight, would sweep across the country, eliminating these individuals with their satellite-guided guns, including President Ellis, Bruce Banner, Stephen Strange and Tony Stark. However, Captain America, along with Black Widow and Falcon, managed to stop the plan and destroy the helicarriers with their own weaponry.

Later, at an undisclosed HYDRA underground lab, Baron Strucker is informed by one of his subordinates that Nick Fury has revealed there existence to the present world at large and some of there sleeper agents have been discovered. Strucker is not overly concerned as they have many more followers hidden around the world. Strucker has within his possession two secret weapons, including the Chitauri Scepter and "the twins" intending to use against Captain America and his friends.

There were sleeper HYDRA agents hidden within S.H.I.E.L.D. that were exposed when Captain America infiltrated the Triskelion and destroyed Project Insight. It was thought that Agent Hand was a HYDRA agent, but it turned out not to be true when Agent Ward, the true sleeper agent, guns her down to save the Clairvoyant, John Garrett from being terminated.

John Garrett, after escaping agent Victoria Hand's custody with the aid of fellow HYDRA agent Grant Ward, continued to work on the Centipede Project at the HYDRA base in Havana. Ward frees Raina from her confinement and introduces Garrett to her as the Clairvoyant. Garrett tasks her with conducting research on the Guest House drugs for Project Centipede, which was secretly backed by HYDRA. Garrett and Ward then raided the Fridge, freeing its prisoners and stealing weapons including the Berserker Staff and the 0-8-4 from Peru. Back at the HYDRA base, Raina informs Garrett that the hard drive containing all of Skye and Simmons' research is locked with a password only Skye holds, prompting Garrett to send Ward to Providence to obtain it. Later, Ian Quinn, who is angry at Garrett for his lies, is brought to the HYDRA base to reclaim his Gravitonium, which was retrieved from the Fridge.

The Avengers raided a HYDRA research base led by Wolfgang von Strucker in Sokovia. There the Avengers went up against two of Strucker's test subjects with superhuman abilities, Pietro and Wanda Maximoff. After the battle, the Avengers recaptured Loki's scepter. Strucker was handed over to NATO. In prison Strucker was killed in his cell by Ultron.

Mitchell Carson was a member of HYDRA and partnered with Darren Cross to acquire the Pym Particles. Carson managed to make off with a derived version of the particles that Cross created.

"Purpose in the Machine"

Helmut Zemo tortures and kills Vasily Karpov, one of the final members of HYDRA who utters the phrase "Hail Hydra" before he is killed.

In 2012, HYDRA agents led by Brock Rumlow took possession of the Chitauri Scepter following Loki's defeat in the Battle of New York in the guise of S.H.I.E.L.D. agents. The group was infiltrated by a time traveling Steve Rogers who was after the Scepter and the Mind Stone it held. By claiming to have been sent by Alexander Pierce and whispering "Hail, HYDRA," Rogers gained their trust and the Scepter.

In the Stark Tower lobby, Pierce and his men, attempted to take custody of Loki and the Tesseract but were fought on the matter by Thor and Tony Stark. After Scott Lang caused a distraction by pulling a wire in Tony's Arc Reactor, Lang and a future Tony attempted to steal the Tesseract, only to be interrupted by a mishap with the Hulk of 2012. The Tesseract landed at Loki's feet and he was able to use the distraction to escape.

A documentary called Hunting Hydra was included in the in-flight entertainment on Peter Parker's flight to Venice.

The original purpose of HYDRA, when it was founded in ancient times was to Hive Paganism. Their sole purpose was to engineer his return and worship him. They would periodically sent over individuals through the monolith for hive to feed on and extend his health and longevity.

HYDRA was rebranded as a branch of the Nazi Third Reich, founded by Johann Schmidt, but eventually left the organization under Schmidt's direction for a new world order. Whatever Nazi beliefs that were discarded from carried on from this division remains a mystery, though the HYDRA organization does believe itself superior to others. One of their recurring mottos is, "Cut off one head and two more shall takes its place," a tribute to the mythological creature on which it gains its name. This proves itself true time and again when many times their enemies have believed they have defeated HYDRA only to discover they have already arranged a contingency plan.

Colonel Phillips states that HYDRA is practically a cult and that Schmidt believes himself a "god".

According to Arnim Zola, HYDRA was founded under the belief that humanity could not be trusted with its own freedom. When they realized they could not win through brute force during WWII, Zola and some of his fellow colleagues decided to infiltrate SHIELD and use acts of terror to slowly make the world desperate for protection. They believed in taking any and all potential threats, including assassinating Erksine when he had perfected the Super Soldier Serum and using Zola's data to target and eliminate anyone who could challenge any of the organization's future endeavors.

At first, the soldiers of HYDRA were armed with standard weapons of the German armed forces of World War II. Many HYDRA troopers were armed with the MP 40 submachine guns. Johann Schmidt himself used the Luger P08. HYDRA's assassins like Heinz Kruger were armed with the Walther P38s. Even before they harnessed the power of the Tesseract, the scientists of HYDRA developed several advanced weapons, like flamethrowers. But with the power of the Tesseract, the HYDRA scientists invented vaporizer rifles, pistols and cannons. They were able to vaporize HYDRA's enemies in a single shot

HYDRA used a variety of advanced vehicles. Thanks to the scientists like Arnim Zola, members of HYDRA could rely on armored vehicles equipped with flamethrowers, futuristic armored personnel carriers, rocket planes, submarines, gigantic tanks, flying bombs, motorbikes, and super bombers like the Valkyrie. 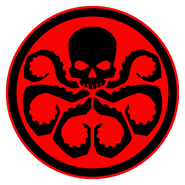 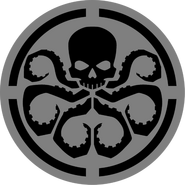 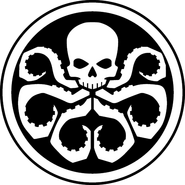 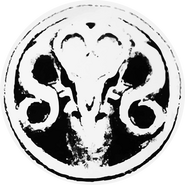 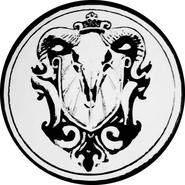 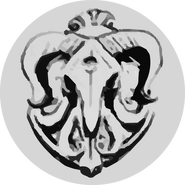 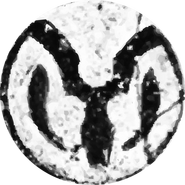 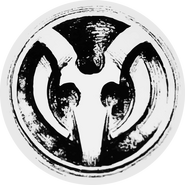 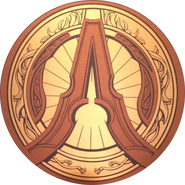 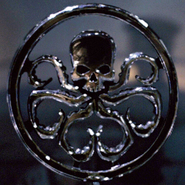 The symbol of HYDRA.

HYDRA soldiers on the move.

A HYDRA soldier at a destroyed factory.

Hundreds of HYDRA soldiers at their main base.

Rogers confronts Fury about S.H.I.E.L.D.'s possession of the HYDRA weapons.

Winter Soldier, one of the best HYDRA assassins.

HYDRA soldiers fire at the Avengers.