"None of that matters anymore, Pete. You're my friend."
―Harry's last words to Peter[src]

Harold "Harry" Osborn was the son of Norman Osborn, and the best friend of Peter Parker. Harry later succeeded his father's Green Goblin alter-ego by adopting the alias of the New Goblin.

Harry Osborn was Peter Parker's closest friend and the son of Norman Osborn, the CEO of Oscorp. Harry had a strained relationship with his father, who had high expectations for his son but was often too busy to be there for him. One day, when dropping Harry off at a class field trip, Norman was introduced to Harry's best friend Peter, who quickly made a good impression with Norman by understanding Norman's scientific work. Norman attended their graduation and congratulated Harry, and also took the time to console Peter for the loss of his uncle, and warmly accepted him as a brother figure to Harry and thus a part of their family. At the same time, Harry noticed that Mary Jane Watson, Peter's childhood crush, broke up with her boyfriend Flash Thompson.

Some time after the end of school, Harry and Peter lived together in a huge apartment bought by Norman. Harry started a relationship with Mary Jane, without telling Peter. Peter discovered that the pair were dating but tried to hide his disappointment. Harry and MJ had an important date at a fair sponsored by Oscorp, where the flaws of their relationship were clear: Harry wanted to impress his father with MJ, and MJ wasn't really interested in him, shown by how she turned away from kissing him. Then Harry and MJ, along with the whole Oscorp board, were suddenly attacked by the Green Goblin, a homicidal criminal who, unbeknowst to Harry, was actually Norman with an insane second personality. Harry tried to save MJ, who was falling down from a terrace, but failed, and she was instead saved by Spider-Man.

On Thanksgiving, Harry tried again to present his girlfriend to his father during a dinner with Peter and his Aunt May, but Norman, who had just worked out that Peter is Spider-Man, suddenly left in a hurry. Harry pleaded with him to stay for dinner with him and Mary Jane, but Norman uncharacteristically insulted MJ and ordered his son to dump her as soon as he was satisfied with her, and then stormed off. Harry was saddened by the lack of attention by his father, and, to make it worse, MJ overheard Norman and called him a creep, and an angry Harry defended him, saying that that "creep" was his father.

While Aunt May was in hospital after being attacked by the Goblin, Harry went to visit her, but he found Peter and MJ getting intimate with each other. With his feelings hurt, Harry went to his father, telling him he was right about everything, MJ included, and unwillingly revealed to the Goblin Spider-Man's true weakness: Mary Jane. Later that very night, Harry found Spider-Man in his living room, depositing Norman's corpse on a sofa. Distraught and assuming it was Spider-Man who killed Norman, Harry tried to shoot the hero but missed.

During Norman's funeral, Harry swore vengeance towards Spider-Man, but expressed his gratitude that Peter was the only family he had left.

After Norman's death, Harry took over Oscorp. He was still good friends with Peter, and at Peter's birthday party, he offered to introduce Peter to his idol, Dr. Otto Octavius, whose research Harry was funding. Peter was, however, still fearful of how delicate his friendship with Harry had become because of Harry's vendetta against Spider-Man.

Harry provided Octavius with tritium, a very rare element which Octavius needed for his fusion experiment. If the experiment succeeded, Oscorp would have gained the rights on a new kind of energy source, making it one of the most important, powerful and rich energy companies in the world. However, during a live demonstration of the fusion, the experiment failed, and the resulting explosion permanently attached four extendable robotic arms onto Octavius, who was taken to the hospital and later escaped, becoming the villainous "Doctor Octopus".

Emotionally destroyed by the failure, Harry started drinking heavily and focused his anger onto Spider-Man. During a party, Harry got drunk and started lashing out at Peter, resenting him for being his father's favorite, accusing him of protecting Spider-Man for the profit of taking Spider-Man's newspaper photos and for "stealing" Mary Jane. During the argument, Harry slapped Peter, humiliating them both in public.

His hatred towards Spider-Man went so far that, when Doctor Octopus arrived to him demanding more tritium, he made a deal with him: the tritium in exchange of Spider-Man's capture. When Doc Ock asked him how can he find the hero, Harry instructed him to use Peter Parker, who takes pictures of Spider-Man. After kidnapping Mary Jane and a long battle, Octavius delivered Spider-Man to Harry and left with his tritium. Armed with a knife, Harry then proceeded to unmask the hero. He was shocked when he realized that his worst enemy was actually his best friend, but he revealed Doc Ock's whereabouts Peter, who left to rescue Mary Jane.

Still in shock, Harry had visions of his father's ghost, who encouraged his revenge towards Peter Parker/Spider-Man. Harry didn't want to hurt his friend and struggled against Norman's will, trying to make the ghost go away: throwing a knife through the mirror in which Norman appeared, Harry shattered it and discovered the Green Goblin's secret hideout, with all his weaponry and equipment. Now, Harry had both the motives and the tools for his revenge.

"It's a funny feeling, not knowing who you are. I get a bump on the head and I'm free as a bird."
―Harry Osborn [src]

Harry coldly brushed off all of Peter's attempts to speak with him and had been preparing himself for his upcoming battle against his former best friend. He used the formula that his father used that turned him into the Green Goblin. With Green Goblin's equipment, Harry became the New Goblin and ambushed Peter, seeking revenge. During their first battle, Harry got hit in his head very hard on a staircase in an alleyway. Peter rushed him to the hospital, and he awoke in the hospital with memory loss. He forgot everything about his vendetta, Spider-Man and the Goblin. He also re-embraced Peter and Mary Jane as his best friends, seemingly with his life finally at peace. His friendship with Peter and Mary Jane appeared to be miraculously restored, and he was happier with them than he had been in a very long time. However, sometimes Harry, having forgotten taking the Goblin Serum, surprised himself with his own physical capacities, such as his incredibly sharp reflexes.

When Peter started distancing himself from his friends and focusing on his late uncle's recently revealed killer, Mary Jane was depressed over her lost acting career and instead found solace with Harry. Harry welcomed her into his home, and they bonded with each other, seemingly becoming closer than their previous dating relationship. After she unwittingly rekindled her long-passed romance with him, and rushed away regretting it, the sudden surge of familiar stress unlocked Harry's memories and restored his vendetta. Again haunted by his father's ghost, who gave him advice on emotional war, Harry decided to hit Peter through Mary Jane and, after threatening her, he forced her to break up with Peter, leaving Peter heartbroken. Later, Harry encountered Peter in a bar and declared to him that he's MJ's new boyfriend. Realizing Harry's plot against him, Peter went to the Osborn mansion, now armed with the aggression-inducing symbiote costume, and a new hatred for his old best friend, and they had a brutal fight. Harry was defeated and humiliated by Peter, and when he tried to hit Peter with a pumpkin bomb, Peter effortlessly threw the bomb back at his face and left, turning his back on the completely defeated Harry.

Later, when Mary Jane was again kidnapped by two of Spider-Man's enemies, Peter returns to Harry, pleading for his help against the impossible odds. But Harry, now disfigured and broken-spirited, no longer cared about his revenge, his friends, or anything at all and ordered Peter to get out, leaving his disappointed old friend with nothing but himself to depend on. After Peter left to fight Venom and Sandman, Osborn's butler, Bernard, revealed to Harry the truth that his father's death was in fact caused by his own goblin glider. This made Harry change his mind regarding his old friend and, putting his New Goblin suit on again, reconciled and teamed up with Spider-Man to save Mary Jane together. During the battle, the two best friends proved to be a formidable team, and together, save Mary Jane. Harry defeated the Sandman, but was defeated and fatally wounded by Venom. Peter managed to finish off Venom alone, and had his final words with Sandman, and then went to the dying Harry's side, along with Mary Jane. With his final words, he apologized to Peter, and confirmed that none of what they did to each other mattered any more, and they were still, and would always be, best friends. Harry died, with his closest friends, Peter and Mary Jane, by his side.

At Harry's funeral, Peter stood at his grave, having learned from all of their ordeals the importance of choosing to do what is right.

Harry was a good man and a loyal friend, having always considered the nerdy Peter Parker his best friend and protected him in high school. And he never allowed his wealth to make him spoiled or arrogant. However, he was also prone to stress, depression and obsession, and his obsession to please his father may strain his judgement and relationships, including treating his then girlfriend Mary Jane as a trophy to impress his father, and developing a jealousy towards his best friend, Peter. After his father's death, Harry becomes obsessed with Spider-Man, and develops a strong vendetta upon him.

After using a different variant of the same performance enhancing serum his father used on himself, Harry gains all of his father's powers: superhuman strength, speed, stamina and reflexes as well as a low-level rapid healing factor which healed his head injury within a day. He has access to all the Green Goblin's weapons. His weapons are improved versions of the Green Goblin's; his glider, especially, has drastically changed, being much lighter and with a greater mobility. Though, fortunately, his insanity caused by the performance enhancer was much less severe compared to his father possibly because it was a different variant from his father's variant.

New Goblin is the embodiment of Harry Osborn's hatred towards Spider-Man and only exists for completing his vendetta. But after Harry comes to terms with his misguided hatred and his friendship with Peter, with no more doubts, he reconciled with his best friend and the two formed an effective teamwork.

Harry and his friend Peter Parker

Harry in his appartment in Spider-Man

Harry as the new CEO of Oscorp

Harry tormented by his father's legacy 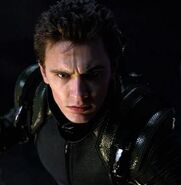 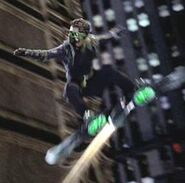 Retrieved from "https://marvel-movies.fandom.com/wiki/Harold_Osborn_(Earth-96283)?oldid=271403"
Community content is available under CC-BY-SA unless otherwise noted.