"My appointments are too hectic, unfortunately. Is Thor going to be there?"
―Helen Cho[src]

Dr. Helen Cho is a world-renowned geneticist who helps the Avengers from her U-GIN Genetics Research Lab in Seoul and the Avengers Tower. Cho shares workspace with Bruce Banner in his lab at Avengers Tower, and her research and technology help keep the Avengers in the fight. She is currently working at the New Avengers Facility.

Helen Cho was called in to help Clint Barton after he was injured by HYDRA. She flew to Avengers Tower and brought with her the cradle, a device that can print living tissue. After setting up in Banner's lab, she used it to heal Barton. Tony Stark invited her to a party but she claimed to be too busy, until she found out that Thor was going. At the party, she watched as the Avengers each tried lifting Mjölnir. When Ultron attacked, she hid under a piano. There, a drone found her and attempted to attack her but Ultron stopped it and let the drone be smashed by Thor.

After the incident, she returned to her work in South Korea. Ultron sneaked into her lab and used Loki's Scepter to put her under his control and used her to create an organic body fused with Vibranium. She began to upload Ultron into the body's brain, during which Wanda Maximoff saw what Ultron was planning and returned Helen to her consciousness. She attempted to shut down the body but Ultron attacked her and her staff. When Captain America came in looking for Ultron, she told him his plan and told him about the Mind Stone.

Later, Helen was enlisted to work at the New Avengers Facility. 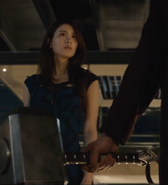