After Steve was believed to have been killed in the final days of the war; Dum Dum Dugan became the new leader of the Howling Commandos; the elite combat unit remained active; even after World War II had ended.

The men that formed the Howling Commandos were originally a prisoners of war that were held captive by HYDRA. They were liberated by Captain America on his first mission and selected by him to become a task force for the Strategic Scientific Reserve; that they would be recruited into a special elite squad under his command. Together they destroyed many HYDRA bases and kidnapped HYDRA's top scientist Arnim Zola. Then they rescued Captain America from the Red Skull and helped him to end HYDRA.

Dum Dum Dugan and Jim Morita were sent to Austria with SSR agent Peggy Carter to take possession of artifacts at the last known HYDRA Facility located there. They captured HYDRA General Reinhardt, his troops and an Obelisk classified as a 0-8-4.

The Howling Commandos, Dum Dum Dugan with Happy Sam Sawyer, Pinky Pinkerton, Junior Juniper met up with a SSR team along with old ally and friend Peggy Carter on a mission in Russia. They discover a factory where the girls were trained to pass for Americans. They see handcuffs on beds in the next room and find a young girl crying. Dugan approaches her gently and the second he looks away sticks a knife in his chest. She grabs Dugan's gun, shoots Juniper and ninjas around the and out a secret passage. Peggy stops Dugan from lobbying a grenade after her his vest stopped the knife. Juniper is dead. They find men in the cell, the team releases the captives. The SSR team with Happy are soon catch in firefight. Dugan busts through a wall, providing them with an escape route. Dugan offers Peggy a spot on the Howling Commandos but she declines.

Barnes, along with the rest of the Howling Commandos, were alluded to when Rogers states he knew men with none of Tony Stark's privilege that were ten times his worth. While working out in the gym in the present, Steve Rogers thinks back to his war adventures in which footage of Dugan could be seen. In a deleted scene, Steve can be seen viewing files on Morita and Falsworth which both label "deceased".

The team was mentioned in the narration at the Smithsonian exhibit dedicated to Captain America's War World II exploits with various memorabilia, a mural featuring Cap and the Commandos and a display set of mannequins with their uniforms exhibited.

Agent Antoine Triplett is mentioned as being the grandson of one of the Howling Commandos presumably Gabriel Jones, supplying Agent Coulson's team with a suitcase full of gadgets from his grandfather.

The Howling Commandos appear in a picture hung in Trip's Mom's house.

Captain America and the Howling Commandos.

Howling Commandos returning from HYDRA's base.

Howling Commandos in a forest.

Concept art for the Howling Commandos' standee at the Smithsonian.

Concept art for the Howling Commandos' standee at the Smithsonian. 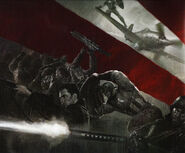 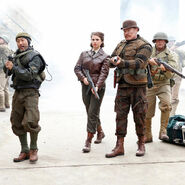 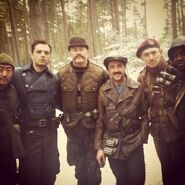 Behind the scenes picture from Sebastian Stan's instagram.
Community content is available under CC-BY-SA unless otherwise noted.
Advertisement